Bavaria's State Premier Markus Söder said a fourth wave of the virus is inevitable. South Korea reported another record number of daily infections. All the latest on COVID here. 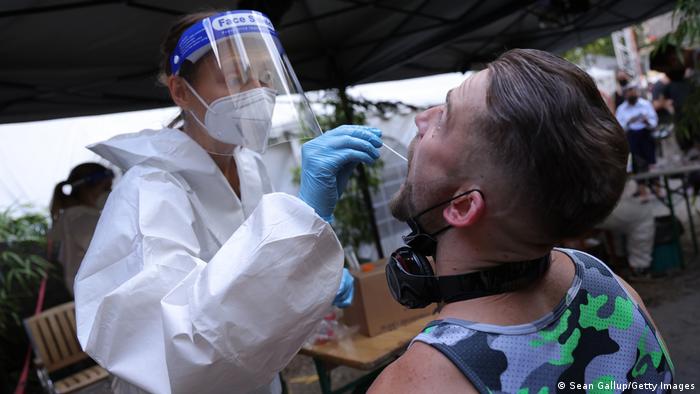 Germany is facing a fourth wave of coronavirus, however deaths are well down from peak levels

"What is clear is that this fourth wave is coming, and definitely in the autumn," Söder said, before warning "the current infection rates are not sufficient to be carefree."

Söder said that vaccinations would remain voluntary, but that those who refused the jab would have to take some responsibility, and that taxpayers could not cover their tests forever. He urged people to get the vaccine, saying testing is not enough, and warned of further outbreaks.

The number of confirmed coronavirus cases in Germany increased by 4,996 on Wednesday, according to data from the Robert Koch Institute (RKI) for infectious diseases. This is the highest number since May. The reported death toll rose by 14, however the average weekly deaths are well down from peak levels.

Here are the latest developments on coronavirus from around the world:

South Korea has reported over 2,200 new COVID infections, a record since the country recorded its first case last year. The recent spike has been attributed to the more transmissible Delta variant and a rise in travel within the country over summer months, Health Minister Kwon Deok-cheol said.

"(We) are at a critical period that could be a turning point for further increases in infections if we fail to stop the current spread," President Moon Jae-in said, calling for continued cooperation from his fellow citizens.

India has recorded over 32 million coronavirus infections since the pandemic began, the health ministry reported on Wednesday. More than 429,000 deaths were recorded.

Authorities in the Australian city of Melbourne have extended the city’s stay-at-home orders for a second week after 20 new cases of the virus were reported. Australia’s second-largest city was set to exit its sixth lockdown on Thursday but Victoria state Premier Dan Andrews has confirmed the extension until at least August 19.

"If we were to open, then we would see cases akin to what is happening, tragically, in Sydney right now," Andrews said, referring to an outbreak in the country’s most populous city. Sydney has reported thousands of cases despite being in week seven of a lockdown.

Russia’s Sputnik V coronavirus vaccine lowers the risk of hospitalization by 20 times compared to those who have not been vaccinated, Gamaleya Centre’s deputy director for scientific work Denis Logunov said.

Logunov also said the vaccine was effective against newer strains of the virus.

Thousands of people in the Lithuanian capital of Vilnius gathered to protest against the government’s planned restrictions for the unvaccinated and those who refuse to get tested.

Protests turned violent late into the night as several people called for the resignation of the government.

US states are struggling to control another spike in infections linked to the Delta variant. Health officials in Texas reported that more than 10,000 people have been hospitalized with COVID-19 for the first time since early February.

Hawaii is set to re-impose restrictions that limit social gatherings to prevent further straining the state's healthcare, Governor David Ige said, as the spread of the new variant pushed hospitalizations to a six-month high in the country.

"The Television Academy and CBS have decided to host all ceremonies ... on the Event Deck at L.A. LIVE, directly behind the Microsoft Theater," the Television Academy said in a statement. The Los Angeles event was initially set to be held indoors with a limited celebrity audience.