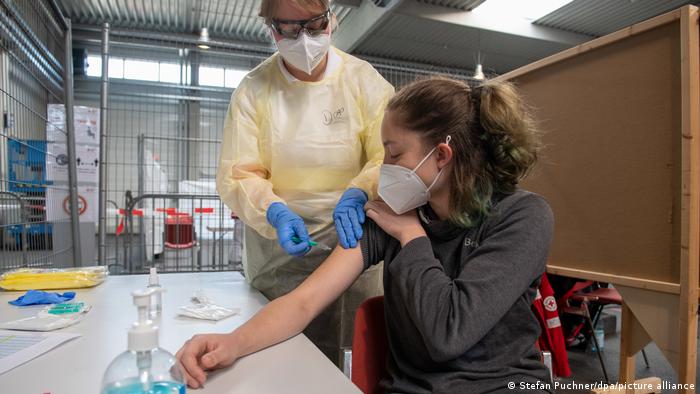 "I'd rather have a ready-to-go immunization center that remains inactive for several days than a licensed vaccine that cannot be administered," the minister said, reiterating that vulnerable persons, such as the elderly, would be treated first.

Germany has secured more than 300 million vaccine doses via the European Commission under bilateral contracts and options, Spahn estimated.

"Even with two doses per immunization [of an individual] we would have enough for [Germany's] own population and could share with other countries," Spahn forecast.

Here's a roundup of the main developments around the world.

Nearly 2 billion doses intended for poor countries such Yemen, Burundi and Afghanistan would be shipped and flown next year, the UN children's agency UNICEF announced on Monday.

Leaders of the G20 world economies  at the weekend pledged to ensure equitable distribution.

State premiers in Germany are working on proposals for a new coronavirus strategy for December. Many are in favor of extending a partial shutdown, according to two state premiers, as the restrictions currently in place have yet to result in a decline in infections. The country's 16 premiers are set to meet Chancellor Angela Merkel on Wednesday to discuss the probable extension.

Swedish-British biopharmaceutical firm AstraZeneca, along with the University of Oxford, showed their jointly developed vaccine had produced 70% efficacy, according to data published on Monday.

The British government will lift a stay-at-home instruction when a national lockdown ends on December 2, Prime Minister Boris Johnson said. Gyms, non-essential retail and personal care businesses will also be allowed to reopen. The national lockdown will be replaced with regional measures involving a three-tier system of restrictions based the scale of the coronavirus outbreak in different areas.

Italy's death toll from the coronavirus exceeded 50,000 people after the nation's health ministry reported 630 new fatalities. Italy was the first major outbreak in Europe and has recorded over 1.4 million cases since the pandemic began.

Since August, 14,000 coronavirus cases and 65 deaths had been recorded. And, 75 or 100 available ventilators were now in use, said health official Abdelraouf Elmanama,

"In 10 days the health system will be unable to absorb such a hike," said Elmanama.

Gaza's Islamist Hama rulers have so far imposed one lockdown amid a blockade which Israel says is to block weapons arrivals.

Australia's two most populous states, New South Wales and Victoria, have reopened their internal border after declaring themselves quarantine-free. It had been closed for 138 days to slow the spread of coronavirus.

Saudi Arabia plans to provide COVID-19 vaccines for free to all people living in the kingdom. The ministry hopes to have enough vaccines to cover 70% of the population by the end of 2021.