Fourteen residents at a German nursing home have tested positive despite receiving two vaccine doses. Markus Söder has warned against lifting Germany's lockdown too soon. All the latest COVID news. 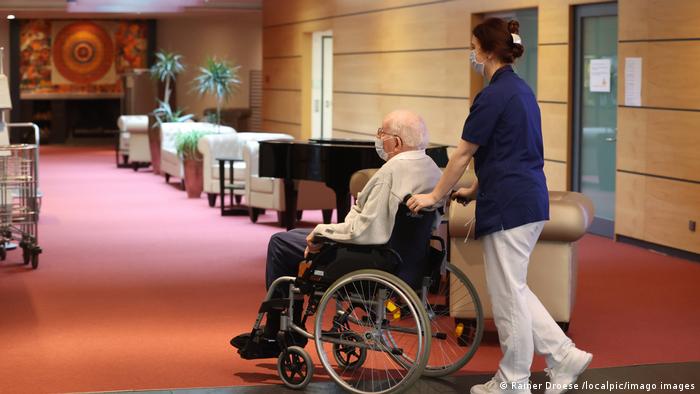 Local officials in the district of Osnabruck, Germany, said there was an outbreak of the UK variant of coronavirus at a nursing home in Belm.

The outbreak came despite all of its residents already receiving two doses of the BioNTech-Pfizer vaccine, with their last shot on January 25.

A local goverment spokesperson said 14 residents tested positive for the virus at the end of last week.

None of them showed any serious symptoms associated with COVID-19. It is unclear exactly how and when the residents became infected, officials said.

The news came as South Africa suspended its vaccination campaign over revelations that the Oxford-Astrazeneca vaccine had limited effect against the South African variant.

Read on for all the latest coronavirus news from around the world.

Germany: The government should be wary about lifting its lockdown too soon and risking a third wave of COVID-19 infections, Bavarian premier Markus Söder has said. The CSU leader was speaking to the broadcaster ARD ahead of a crunch meeting to review the restrictions aimed at stemming the pandemic.

Chancellor Angela Merkel and the leaders of Germany's 16 federal states are due to meet virtually on Wednesday to discuss whether to ease the restrictions from February 15, or extend a lockdown that began in mid-December.

"I think, basically, the lockdown will have to be extended for the time being," Söder said.

"There is no point in just breaking it off now. Imagine: we open everything in one fell swoop, then within two, three weeks we will be in a situation maybe even worse than before," he said. "If we make a mistake now, we will have a third wave.

Germany's Health Minister Jens Spahn (CDU) echoed the sentiments of Söder, as he said: "We need to get noticeably below 50" infections per 100,000 inhabitants per week. As of Monday morning, the so-called incidence rate nationwide was 76.

Spahn also said current evidence suggests all three vaccines approved in Europe — including the one manufactured by AstraZeneca — provided effective protection against serious infections, such as the variant found in South Africa.

The number of confirmed COVID-19 cases in Germany increased by 4,535 to 2,288,545, according to data from the country's agency for infectious diseases, the Robert Koch Institute (RKI).

Ukraine is in talks with other countries, including Poland, to acquire some of their vaccines, Ukrainian President Voldymyr Zelenskiy said. The country aims to vaccinate half of its 41 million population by early 2022.

It has so far secured 20 million doses of vaccine from India's Serum Institute and the global COVAX scheme. Ukrainian President said that he is further expecting to receive 5 million doses of China's Sinovac vaccine.

Visitors and customers must wear medical masks, and a negative COVID-19 test is required for visits to hairdressers. Meetings of people from more than two households are also allowed again.

However, Austria is also tightening border controls with all neighboring countries to contain the spread of the virus. Every traveler trying to cross the border will need to present a negative coronavirus test; there will no longer be exceptions.

Also in Austria, the federal government has warned against travel to the Tyrol province amid concern over cases there of the more contagious coronavirus variant first detected in South Africa.

Hungary: Authorities have approved Russia’s coronavirus vaccine Sputnik V, with 40,000 doses of the jab already to be given. It is the first batch of a total order of two million doses to be supplied over three months. Recent studies showed the vaccine is highly effective.

France: Authorities have banned all non-essential travel to and from destinations outside the European Union, as well as its overseas territories. It is part of the government's strategy to rein in high contamination rates. France has refused boarding to more than 700 passengers for failure to justify their travel. The border measures would remain in force at least until the end of February.

"Cancelling that debt is unthinkable," Lagarde told France's Le Journal du Dimanche weekly. "It would be a violation of the European treaty which strictly forbids monetary financing of states."

She was reacting to a call Friday by more than 100 economists for the ECB to further boost the economic recovery of eurozone members by forgiving their debts.

Britain: More than 12 million people in Britain have been vaccinated against coronavirus, according to government figures released on Sunday.

Ministers want to offer a vaccine to all 15 million of the country's most vulnerable people by mid-February, including those over 70, health care workers and those with pre-existing conditions. The government is confident it will reach this target, and aims to offer everyone above the age of 50 a jab by May.

Thanks to early, rapid procurement, Britain is suffering less from vaccine manufacturing bottlenecks than some countries in the EU.

The EU has been under heavy pressure since vaccine suppliers, including Pfizer, delayed the delivery of promised doses.

In South Korea, the city of Seoul is offering free coronavirus tests for pet dogs and cats if they have come in contact with COVID-19 infected humans.

The city issued guidelines on testing of pets last week after a cat in the southeastern city of Jinju tested positive for COVID-19. The cat belongs to a mother and daughter who were among many positive cases associated with a religious facility. Seoul officials say there is no evidence of animals transmitting the virus to humans but the pets must be quarantined for 14 days in case of an infection.

Mexico: President Andres Manuel Lopez Obrador has given his first press conference since contracting the coronavirus.

Virtually symptom-free having first tested positive on January 24, the 67-year-old has now given a negative test result and wanted to "thank all Mexicans, women and men, who were concerned about my illness. Fortunately I pulled through," he said.

US: President Joe Biden said on Sunday it will be "very difficult" for the United States to reach herd immunity by the end of this summer, requiring at least 75% of the population to be inoculated.

"The idea that this can be done and we can get to herd immunity much before the end of next — this summer, is — is very difficult," Biden told CBS news in an interview.

The United States has so far administered 41,210,937 doses of COVID-19 vaccines and distributed 59,307,800 doses, the Centers for Disease Control and Prevention said.

Israel has started to exit from its third lockdown as barber shops and other small businesses reopened at the weekend.

The country has embarked on a vaccination drive that has seen some 60 percent of Israel’s population receive at least one shot.

A suspension of international flights will remain in place until February 20, along with the closure of Israel's land borders.

Kuwait civil aviation said on Sunday that non-Kuwaitis would not be permitted to enter the country as of February 7, with a few exceptions, the authority said in a tweet, as the country seeks to curb coronavirus infections.

The exceptions are: diplomatic missions and diplomats, governmental medical staff, and private sector medical staff according the approved list from the Ministry of Health, the authority said in its statement.