AstraZeneca has been unable to establish the vaccine's effect against severe disease and hospitalization linked to the new variant. Meanwhile, France has seen a drop in new cases since the vaccine was rolled out. 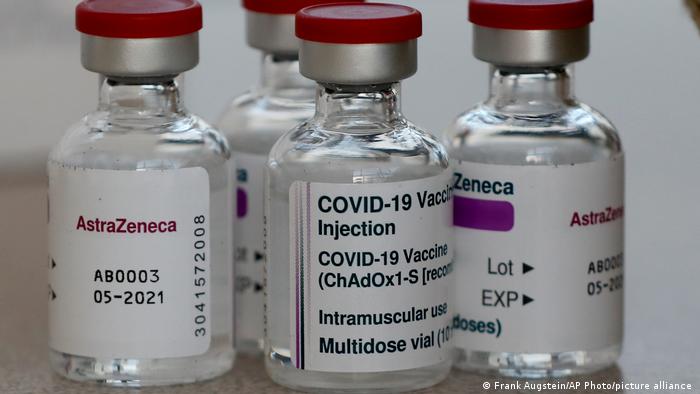 AstraZeneca said on Saturday that its coronavirus vaccine offered only limited protection against mild cases of the South African variant of the virus. The company based its conclusion on early data from a trial and study released by South Africa's University of Witwatersrand and Oxford University.

"In this small phase I/II trial, early data has shown limited efficacy against mild disease primarily due to the B.1.351 South African variant," said an AstraZeneca spokesman.

"However, we have not been able to properly ascertain its effect against severe disease and hospitalization, given that subjects were predominantly young healthy adults. Oxford University and AstraZeneca have started adapting the vaccine against this variant and will advance rapidly through clinical development so that it is ready for Autumn delivery should it be needed," the company added.

Iran is set to start administering jabs next week, its Health Ministry on Sunday.

"The vaccinations will begin on Tuesday, first for doctors and care personnel, and then for citizens aged 65 and up," said Health Minister Said Namaki. After that, it will be a "step by step" process until the entire population of 83 million is vaccinated, he said in comments to the ISNA news agency.

The first jabs will use the Sputnik V vaccine provided by Russia.

The vaccination drive had been set to start either at the end of February or in early March, but the timetable was pulled forward so that it could start 24 hours before the 42nd anniversary of the country's 1979 Islamic Revolution.

Afghanistan has received 500,000 doses of AstraZeneca's COVID-19 vaccine from India, the first to arrive in the country.

The vaccines were produced by the Serum Institute of India (SII), which is producing the jab vaccine for mid- and low-income countries.

Health workers, security force members, teachers and government employees are due to receive the jabs first.

Cambodia has received its first shipment of COVID-19 vaccine, a donation of 600,000 doses from China, the country's biggest ally.

Hun Sen had announced that he would be the first person to be vaccinated, but backtracked last week, saying the Chinese-made Sinopharm vaccine was effective only for people aged between 18 and 59, while he is 68.

China, where the virus was first found in late 2019, has been making such donations to several nations in what has been dubbed "vaccine diplomacy," aimed especially at poorer countries.

France has reported a fall in new infections and hospitalizations from the coronavirus. The fall comes at a time when the country has steadily increased vaccinations against the virus. The country has rolled out the AstraZeneca vaccine after the Pfizer and Moderna vaccines.

On Saturday, France reported 20,586 confirmed cases of the coronavirus, marking a third straight day when cases fell. Meanwhile, hospitalizations fell by 245 from the previous day.

In Germany, there is growing dissatisfaction with the German government's management of the coronavirus pandemic, according to a recent poll conducted by research institute YouGov. The results of the poll came out just days before state and federal leaders are going to decide whether to extend a nationwide lockdown that currently runs until February 14.

In the poll, only 50% of people rated the government's management positively. People cited the slow distribution of the vaccines as a reason for their dissatisfaction. About 345,600 doses of the vaccine are expected to arrive on Saturday, followed by 391,200 doses next week.

Germany's Robert Koch Institute reported 8,616 new coronavirus infections in the past 24 hours on Sunday morning, more than 2,000 fewer infections than the previous Sunday. There were also 231 new deaths recorded.

In Switzerland, about 500 people in the town of Zug have protested while wearing white protective suits. People shouted slogans and expressed their dissatisfaction with the restrictions imposed to control the pandemic.

Protesters carried placards that read, "wearing a mask is modern slavery", while loudspeakers blared that "denounce those you love".

The protests in the well-known tax haven come at a time when the country's health minister, Alain Berset has said that existing restrictions would stay in place till at least the end of February, and probably longer, if the virus continued to spread.

A United Kingdom official says the country is not considering issuing so-called "immunity passports'" for those who have been given the coronavirus vaccine but they could ask their doctor for written proof of their vaccine status if they need to travel.

Vaccines Minister Nadhim Zahawi said Sunday that vaccine passports would be discriminatory and officials did not want getting vaccinated to be "made in some way mandatory through a passport."

Countries including Greece have said they will waive quarantine requirements for those who have had their jabs.

The UK has, so far, vaccinated over 11 million people using either the Pfizer/BioNTech or Oxford/Astrazeneca shots.

Romania's prime minister Florin Citu has said that the country wants to produce one of the EU approved coronavirus vaccines. Citu said that further formalities were being undertaken to ink a production deal. He didn't disclose the timeline of the project.

Denmark has announced that everyone entering the country through land or ports would be subject to a coronavirus test on arrival from Sunday. After the test, the person has to undergo a 10-day quarantine at home.

Denmark's government said that those who didn't follow the rule would be given a fine of €470. The country has imposed the measure in light of the spread of new variants of the coronavirus. The only exceptions are those transporting goods in border areas and commuters.

Denmark's measures come at a time when its neighbor Sweden also enforced the requirement of a negative coronavirus test at the border. The measure is applicable till March 31 on people above the age of 18.

Venice has moved its carnival celebrations this year online. The event will be broadcast live on Saturday and Sunday from Palazzo Vendramin-Calergi, featuring 90-minute programs with artists.

The carnival in Venice is normally attended by thousands of people, and includes masked balls, gondola parades and fireworks. Last year's event was called off abruptly after Italy was struck by a massive outbreak of the coronavirus. Italy is currently under curfew, with people not allowed to move out after 10 pm.

Chile vaccinated over 550,000 people against the coronavirus within three days. The country's ministry of health said that over 112,000 doses were administered to people above the age of 85 on Friday alone.

Chile has a target of vaccinating 5 million people by March-end. The country is administering the Pfizer vaccine, along with the vaccine from Chinese company Sinovac. The country has also inked supply deals with Johnson & Johnson and AstraZeneca.

The firm has blamed production woes in the EU for not delivering as many doses of its COVID vaccine as it had promised. These are some of the companies involved in the production of the AstraZeneca vaccine in the EU.