France recorded almost 17,000 new cases, whereas Britain's number rose by about 13,000. The British government said the sudden rise was due to a "technical issue." All the latest developments from DW. 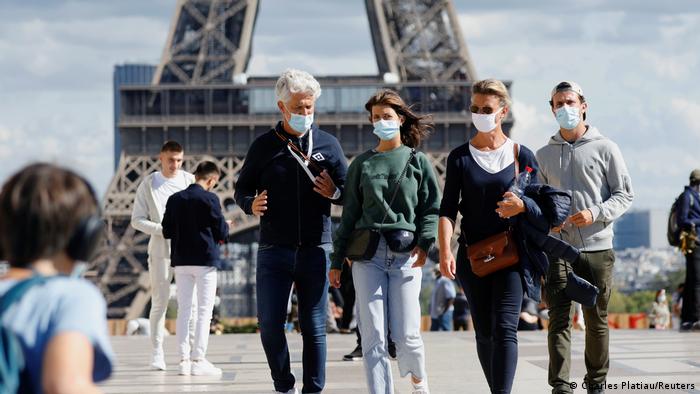 Britain and France both posted record high rises in the daily number of coronavirus cases on Saturday evening.

Bars and restaurants are closed in the southern port of Marseilles, and rising infection rates mean similar closures could soon apply in the capital, Paris. Mask-wearing is compulsory, even outdoors, in a number of French cities.

In Britain, the Health Ministry reported almost 13,000 new cases, almost double the cases reported on Friday. The British government said the sudden spike was due to a "technical issue" which caused a delay in reporting previous cases.

Britain's coronavirus death toll stands at 42,317 — higher than any other country in Europe. In a bid to curb the spread of the virus, the government has imposed restrictions on social gatherings and warned that tougher measures could follow if infection rates don't start to drop.

Europe is in the middle of another surge in cases, as new restrictions are being placed across the continent.

Germany: Data from the Robert Koch Institute showed that cases increased by 2,279 on Sunday. The death toll rose by 2, taking the total to 9,529.

Italy:  The country reported 2,844 new cases on Saturday, its highest tally since April, when the country was still in lockdown. The death toll rose by 27. The Italian government announced measures to curb the rise in numbers to be introduced soon, which will make wearing masks in public compulsory.

Ukraine: Former President Petro Poroshenko has been hospitalized for double pneumonia, according to his wife. "Despite the fact that my husband has double pneumonia, he is strong-willed and is demonstrating this in the fight against the disease," Maryna Poroshenko said. The 55-year-old tested positive for the virus just a few days ago.

Ireland: The chief medical officer of Ireland said the country was seeing rising numbers after the country reported the highest rise in cases since April. Ireland has taken measures such as banning indoor restaurants and travel in and out of the capital, Dublin.

Poland: After reporting 1,934 new cases on Sunday, Poland's total caseload has cracked the 100,000 mark. The country has registered 100,074 cases and 2,630 since the pandemic began. Though it was one of the first countries to go into lockdown, Poland's conservative government has not committed to another despite recording three daily case records in the past week.

India: The South Asian nation has recorded 75,829 new coronavirus cases in the past 24 hours, bringing the total number of infections to 6.5 million, according to data from the Health Ministry.

India's death toll of almost 102,000 is the world's third-highest behind the United States and Brazil.

The world's second-most populous country is registering the highest number of daily cases globally, but it's also reporting that ill people are recovering at a rate of more than 83%. Still, experts warn India's lower rates of testing compared to many other countries could mean its real tally may be much higher.

As infections continue to surge, India's Health Minister Harsh Vardhan said the country hopes to have 500 million doses of coronavirus vaccine by July of next year.

USA: President Donald Trump, who tested positive for coronavirus, put out a video of himself saying the coming days will be "most crucial." He and First Lady Melania Trump are receiving treatment at the Walter Reed Hospital.

Tunisia: The North African nation is set to ban all public gatherings, and reduce working hours for public sector employees. The decision was taken due to the rise in coronavirus cases, over fears that the healthcare sector would be unable to cope with the high numbers. The country faces a shortage of intensive care beds.