The WHO has warned the Asia-Pacific region faces a surge in COVID cases as the omicron variant spreads. Elsewhere, a British study found that mRNA vaccines provide the biggest boost to antibody levels. DW has the latest. 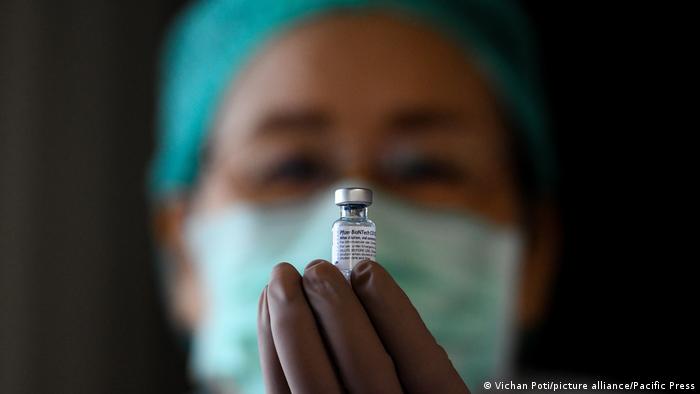 World Health Organization officials have said that while border closures may help some countries buy time to deal with the new omicron variant, the measures put in place to deal with the delta variant must remain the foundation for effectively fighting the coronavirus pandemic.

"Border control can delay the virus coming in and buy time. But every country and every community must prepare for new surges in cases," said Dr. Takeshi Kasai, WHO regional director for the Western Pacific.

"The positive news in all of this is that none of the information we have currently about omicron suggests we need to change the directions of our response."

However, he added that the Asia-Pacific region should brace for a surge in cases ahead of the Christmas holidays. People needed to remain vigilant due to increased travel and gatherings.

While much remains unknown about the new variant, some health authorities suspect that it may be more contagious. Many questions remain, including whether it makes people more seriously ill or if it can thwart available vaccines.

WHO Regional Emergency Director Dr. Babatunde Olowokure said countries must aim to implement the same measures used to curb the spread of the delta variant, including full vaccination coverage, social distancing, mask-wearing and other measures.

WHO urges people not to panic over omicron

Coronavirus vaccines made using the mRNA technology, like the BioNTech-Pfizer and Moderna shots, provide the biggest boost to antibody levels when administered 10-12 weeks after the second shot, a British study has found.

The "COV-Boost" study found that a full dose or half dose of the Pfizer shot, or a full dose of Moderna vaccine, provided an effective boost to antibody and T-cell levels in both cases, regardless of whether the initial vaccination was done with Pfizer or AstraZeneca.

"A third dose will be effective for many of the vaccines we've tested and in many different combinations," said Saul Faust, an immunology professor at the University of Southampton.

As more countries have begun to detect cases of the omicron variant. The World Health Organization (WHO) said that the strain has been detected in 38 countries but as yet no deaths had been reported.

"We're going to get the answers that everybody out there needs," WHO emergencies director Michael Ryan said.

The global health body warned that it could take a number of weeks to understand how infectious the strain was and how severe infections could be.

In South Africa, Health Minister Joseph Phaahla said the country is entering the fourth wave of the pandemic as infections continue to rise. New daily cases in the country nearly doubled to 8,561 on Wednesday, a steep rise from 4,373 a day earlier, according to official statistics.

Health officials said they had seen increasing hospital admissions in children under the age of 5 due to the spread of the omicron variant. They also noted higher case numbers among children aged 10-14.

The public health agency in the European Union has said the omicron variant could be responsible for over half of all infections in the 27-member bloc over the next few months. The agency added that no cases of severe disease had yet been identified in Europe.

Germany reported 74,352 new infections on Friday, slightly higher than a day before, according to data from the Robert Koch Institute for infectious diseases (RKI). With 390 deaths reported in that period, the total death toll has risen to 102,568.

Poland and Switzerland will be added toGermany's list of high-risk countries to visit, effective Sunday. Its neighbors will join fellow EU members the Netherlands, Ireland, Belgium and Greece. Liechtenstein is also set to be put on the list next week.

Switzerland has announced more stringent measures as it battles a surge of COVID-19 infections. There have been more than 96,000 cases in the past 14 days.

From Monday, face masks will be required to be worn and a vaccination certificate or proof of recovery must be produced. The government is also encouraging people to work from home.

Authorities in Italy have caught around 280 unvaccinated health care workers during a number of checks. According to police, around 6,500 employees in the health sector were checked. The Carabinieri found that more than126 employees continued reporting for duty despite being suspended for non-compliance.

Eight doctors who had been inspected were also among those who did not have vaccinations.

France has reported nine confirmed cases of the omicron variant on the mainland. The government's top scientific adviser said it could be the dominant variant in the country by the end of January.

Russia has recorded at least 578,020 deaths, making it the third-worst in the world, after the United States and Brazil. According to figures from Reuters news agency which come by way of official statistics, October has been the deadliest month for the country so far.

Rosstat figures released on Friday showed there had been 74,893 deaths from COVID-19 or deaths related to the virus in October.

Russia has been battling a fourth wave driven by the delta variant but has yet to report a case of the omicron variant. The country is also battling a high degree of vaccine skepticism, despite having developed its own vaccine.

Malaysia has reported its first omicron case in a foreign student who came back after visiting her family in South Africa last month.

India has reported its first two omicron cases. However, the government said it had no immediate plan to authorize booster vaccine shots for the population, despite demands from lawmakers.

Nepal is set to ban the entry of travelers who have been in eight African countries and Hong Kong, in order to curb the spread of the new variant.

Sri Lanka has identified the first omicron patient in the country. The Sri Lankan national had recently returned from South Africa.

Australia has reported its first community transmission of the new variant, but authorities are set to stay on track with a plan to reopen the economy.

"Transmission is always a concern but we again need to keep it in perspective," NSW Health Minister Brad Hazzard told reporters. "Worldwide there is no clarity around whether this particular variant is going to cause us anywhere near the problems that the earlier variants caused us."

Mexico has become the latest country to confirm a case of the omicron variant, raising fears of a possible spike in infections.

According to Deputy Health Minister Hugo Lopez-Gatell, the infected person had traveled from South Africa but had presented mild symptoms.

"Their likelihood of recovery is favorable," wrote Lopez-Gatell on Twitter. The deputy minister called for calm and said that closing borders was not useful a useful way of containing the virus.