The WHO has said it's too early to tell if vaccines will need to be recalibrated, adding it's important for manufacturers to examine their jabs. Germany's BioNTech has said adjustments can be made fairly quickly. 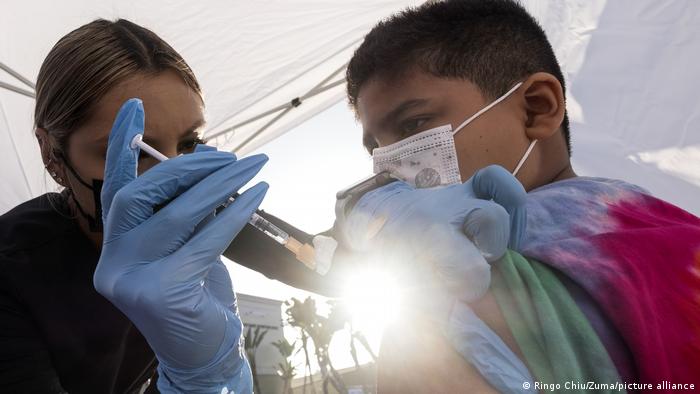 Since scientists in South Africa announced the discovery last week of a COVID-19 variant now known as omicron, researchers around the world have been trying to get a handle on the type of threat it poses.

The severity of infections is one of the key concerns of scientists and health officials. Early indications suggest omicron is highly transmissible, but its mortality rate is not yet known.

Another issue scientists are grappling with is whether vaccines will need to be adjusted in response to the new threat.

South African Health Minister Joe Phaahla said Friday that only a small number of vaccinated people have been infected by the omicron variant in his country, mostly with mild cases. He added that the vast majority of those who have been hospitalized were not vaccinated.

S. Africa 'will be able to cope' with omicron

WHO: Too soon to say if vaccines need adjusting

The World Health Organization (WHO) has said not enough is known about omicron to determine if vaccines need to be recalibrated. WHO Emergencies Director Mike Ryan said Friday there was not enough evidence to suggest currently available vaccines would need adjusting to protect against the new variant.

The global health body's chief scientist, Soumya Swaminathan, cautioned against panicand said it was not yet possible to confirm whether omicron would become the new dominant strain.

"We need to be prepared and cautious, not panic, because we're in a different situation to a year ago," Swaminathan told Reuters news agency.

A WHO spokesperson called it "commendable" that vaccine manufacturers were checking their inoculations for efficacy against omicron.

"It is very commendable that vaccine manufacturers already start planning ahead and plan for the likelihood for having to adjust the existing vaccine," said Christian Lindmeier. "That's good not just to wait until the final alarm bell rings."

Ugur Sahin, the CEO of German biotechnology company BioNTech, said the company should be able to make adjustments to its vaccine relatively quickly.

Sahin said the existing vaccine, developed in partnership with Pfizer, would have a high likelihood of providing protection against severe infection, but said at some point in the future there could be a new vaccine.

"I believe in principle at a certain time point we will need a new vaccine against this new variant. The question is how urgent it needs to be available," Sahin said.

He said a relaunch of its shot could be achieved within 100 days, but added that people should continue looking for its current offering.

How is omicron variant affecting travelers?

COVID: How dangerous is the omicron variant?

Scientists have urged caution — but not panic — over omicron. DW looks at what we know so far about the potential variant dangers.

The world is worried about the new COVID-19 omicron variant, first detected in South Africa. Many countries have imposed travel bans. In South Africa itself, people fear the restrictions more than the virus.