Belgian hospitals are on the brink again after being overwhelmed in the fall. In Spain, a man was arrested for ignoring his COVID-19 symptoms. Follow DW for the latest. 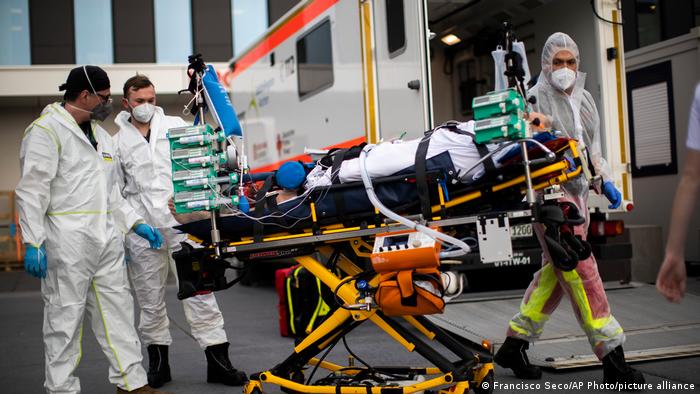 A Belgian COVID patient is prepared for transport to a hospital in Aachen, Germany

Belgium's Health Ministry said Friday that the country's intensive care units are struggling to cope with a third wave of coronavirus infections and has asked Germany for help relieving the patient load, according to a Belgian health official.

Germany received coronavirus patients from Belgium in November during an earlier wave of the pandemic, and earlier this week, more patients suffering from COVID-19 were brought to nearby Aachen, just across the border.

Van der Auwera said hospital staff in Belgium were "exhausted, pushed well beyond their limits." He did not specify how many patents could be transferred to German hospitals.

Van der Auwera added that there were just 82 beds currently available in intensive care units across the country.

Prime Minister Alexander De Croo confirmed Friday that restaurants and cafes would reopen outdoor terraces from May 8, with four people allowed per table.

Here's a roundup of the latest coronavirus news from elsewhere in Europe and around the world:

In Spain's island of Mallorca, a man was arrested for assault after he allegedly ignored his COVID-19 symptoms. The 40-year-old continued coming to work and visiting a gym despite developing a fever. The suspect also disregarded his supervisor's appeal to stay home and ignored pleas from his colleagues. After his PCR test came back positive, five other colleagues also tested positive and then passed the virus on to their family members, including three babies.

In Switzerland, health authorities discovered a patient suffering from a new coronavirus variant which seems to have originated in India. The patient was in transit on one of the country's airports, they added. Swiss officials were considering putting India on the list on high risk countries.

Germany has reported 23,392 coronavirus cases, while 286 more people have died, the Robert Koch Institute (RKI) announced in its daily update on Saturday.

Chancellor Angela Merkel urged Germans to accept the nationwide pandemic measures that came into force at midnight. The restrictions include 10 p.m. to 5 a.m. curfews and access to non-essential shops in districts with high infection rates. Celebrities have come under fire for mocking the law.

Days after a national "emergency brake" was signed off by President Frank-Walter Steinmeier in order to stem the tide of infections, the federal government is set to upgrade Germany's 2021 economic growth forecast, despite the ongoing curbs.

The move comes as industries are bouncing back from the economic fallout caused by the pandemic.

"Despite the continuing lockdowns, the economy is developing stronger than many expected," Economy Minister Peter Altmaier told the Funke Media Group.

"In January, we forecast growth of 3%. Current data shows that it will even be slightly higher," Altmaier added.

The government will announce its spring projections on Thursday.

German Justice Minister Christine Lambrecht said people who have been fully vaccinated may have certain restrictions lifted soon. There is a major meeting on the topic on Monday. Exemptions may cover entry regulations, access to shops and certain services.

India's Supreme Court has told Prime Minister Narendra Modi's government that it wants a "national plan" for the supply of oxygen and essential drugs for the treatment of coronavirus patients.

India's underfunded health system is falling apart as the world's worst coronavirus surge shows no signs of easing up. India registered another global record in daily infections on Saturday with 346,786 reported cases.

And now, the Press Trust of India news agency has said the country's Defense Ministry will fly 23 mobile oxygen generating plants from Germany to help with critical shortages of the vital gas, along with drugs and hospital beds. Each plant will be able to produce 2,400 liters of oxygen per hour, the agency reported.

Hospitals in capital New Delhi and other hard-hit states are critically short of beds and oxygen, while crematoriums are overburdened. At least 20 COVID-19 patients died overnight at the critical care unit of New Delhi's Jaipur Golden Hospital due to low oxygen levels.

Kuwait's directorate general of civil aviation said early on Saturday that it had suspended all direct commercial flights coming from India, beginning April 24, remaining in place "until further notice."

Iran is also barring travelers from India. Officials raised concern over the new COVID-19 variant but did not specify if and how many cases linked to it were detected in Iran.

"The Indian coronavirus [variant] is a new threat we face," President Hassan Rouhani said in remarks broadcast on state TV.

Canadian Prime Minister Justin Trudeau told reporters he was "very excited" as he received his first dose of AstraZeneca's COVID-19 vaccine at an Ottawa pharmacy.

Trudeau then watched on as his wife Sophie received her first shot. 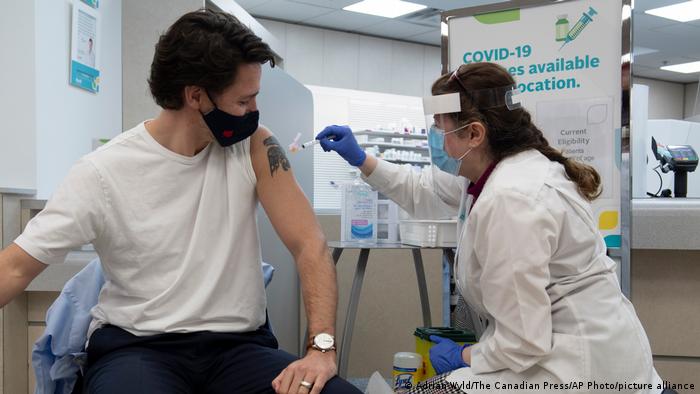 The Johnson & Johnson COVID-19 shot will be administered with immediate effect in the United States after a brief halt to the rollout of the one-dose vaccine prompted by blood clot fears.

New Zealand has paused its newly opened travel bubble with Australia after a COVID-19 outbreak in the west of its larger neighbor.

"As set out in our Trans-Tasman bubble protocols, travel between New Zealand and Western Australia has been paused, pending further advice from the state government," the New Zealand government said on its website.

The decision came after Western Australia announced that the regions of Perth and Peel were entering a three-day lockdown, starting midnight Friday to Saturday, due to a traveler testing positive for the virus.

On April 19, Australia and New Zealand began an arrangement whereby travelers between the two countries no longer needed to go into a managed isolation facility.

More and more people are losing hope in the German government’s inoculation campaign. But family doctors are ready to help, and the health minister has said the vaccination pace will pick up.