Coronavirus crisis: EU interpreters left in the lurch | Europe| News and current affairs from around the continent | DW | 14.06.2020

With EU meetings being put on ice amid the coronavirus crisis, freelance interpreters have been losing work. The people who facilitate communication within a multilingual Europe are now fighting for survival. 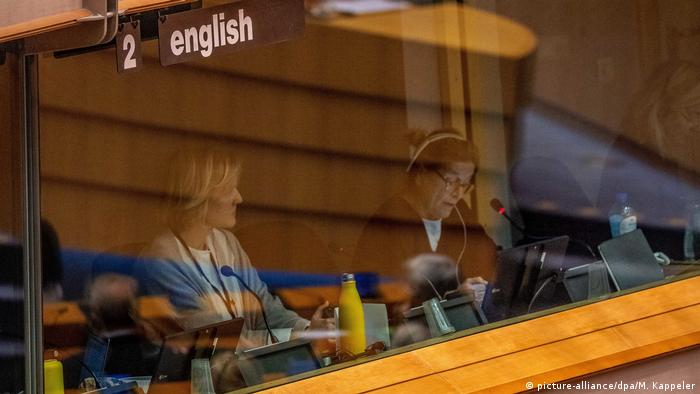 "Ārštata tulki prasa solidaritāti" — this sentence would be incomprehensible to most members of the European Commission (EC) if it were not for Zigmunds Steins. "Freelance interpreters call for solidarity," is how he translates it.

Steins is a freelance conference interpreter from Latvian to English for the EU institutions in Brussels. He and people like him are the almost unnoticed helpers who provide simultaneous translation in all 24 official EU languages, ensuring smooth communication within the multilingual bloc.

Steins has lost all his work with the EU since personal meetings were stopped because of travel bans and social distancing. Normally, some 1,500 freelancers take on half of all interpreting work during the busy plenary weeks. But the little that is left over and is now taking place online amid the coronavirus pandemic can be done by the interpreters who are permanently employed by the bloc.

Suddenly, the freelancers have no work anymore and are living in expensive Brussels without an income. And they have no idea what the future will bring.

The European Commission estimates that there is currently only about 20% of the usual work for interpreters. Now, Steins has to sit by helplessly while he waits to be able to return to his interpreting booth. "I am living on the four jobs I had from January to May this year. I already know that I can't pay the rent this month," he says.

He and his fellow interpreters are calling for solidarity, but the EU institutions have so far made no plans to give better support to their silent freelance army. The EC's spokesperson for budget resources, Balazs Ujvari, said that the commission had paid for existing contracts up to the end of May 2020 to help interpreters over the worst of the crisis. But from June, they have been completely left on their own.

Elisabeth Dörrer, who has been interpreting into German from six languages at EU summits and high-level meetings for 29 years, translating for German Chancellor Angela Merkel, among others, has been particularly badly affected. "I have lost 90% of my work," she says. Dörrer also wrote an appeal to EU budget commissioner Johannes Hahn that was signed by more than 600 of her fellow interpreters, but has so far received no response.

In this difficult situation, the International Association of Conference Interpreters (AIIC) has taken over the negotiations with EU agencies.

But these have only made the non-negotiable offer to pay a one-off sum of €1,300 ($1,463) in advance, which the freelancers would have to pay back by working three days at conferences as soon as the EU schedule gets back to normal. The problem is that no one knows when that will be; a return to normal interpreting activities could be as far off as January 2021.

After their years of committed work, the interpreters are outraged at what they see as an unacceptable offer. They feel it is ironic that the EU, which is otherwise always ready to take up the cause of social rights, is treating its freelancers this badly and allowing them to fall by the wayside financially.

"I have rejected the offer because I find it humiliating," says Dörrer, and many of her colleagues have done the same thing for the same reason. They are calling for a solution of the kind offered by several EU member states, who are paying freelancers monthly allowances.

Read more: Asylum requests: A good interpreter can make all the difference

But there is a sliver of hope. According to EC spokesperson Ujvari, the Commission is working on putting in place the technology to make it possible for interpreters to work remotely at online meetings. If this succeeds, he says, freelancers could be employed more frequently again in the coming months.learning languages

People who want to interpret for the EU need several university degrees and have to work constantly on their skills. Dörrer says she takes three months of unpaid "holiday" each year to hone her proficiency in languages.

Doing that includes keeping up to date with the huge number of technical terms. When heads of government argue about the EU budget, interpreters have to know in all languages what is meant by MFF (multiannual financial framework) or what regional assistance is. And sessions at the European Court of Justice require a comprehensive knowledge of legal jargon.

Interpreters have to make sure that everyone in the room understands everything and that the heads of state and government can speak in their native languages. So if Italian Prime Minister Giuseppe Conte starts ranting during a fight over the new coronavirus assistance measures, his interpreter has to translate everything word for word and as fast as possible.

A threat to livelihood

"The commission lets us move here and put our children in school in Brussels and then doesn't care what kind of social status we have," says Hanna Garcia Landa, an interpreter from the French booth who has been translating for the EC since 1994.

Read more: 15.4 million are elarning German as a foreign language

Garcia Land came to Brussels with "only" three languages and says she has since learned Dutch as well — the EU encourages interpreters to keep offering more languages. She decided years ago to move to Brussels so she would become "more attractive for the EU," she says.

"We are expected to wait for the crisis to end and start working again when everything is over. But many colleagues will have already left Brussels because they are broke," says Dörrer, who is currently living from her retirement savings.

And the interpreters see the coronavirus aid package that the EU is currently mobilizing as a case of double standards. Dörrer is angry that while €750 billion is to be paid out to those worst affected, interpreters are not included among the recipients "We are EU citizens, too," she complains.

Interpreters oil the wheels of the EU machine, ensuring that people from all 27 member states can communicate effectively with one another. But it’s a skill few people are able to master, as DW found out. (05.12.2012)

'Love goes through the stomach': 13 German idioms about food and cooking

German is rich in idioms revolving around food and cooking. Learn some of them to impress your friends while also whetting your appetite in the process! (03.06.2020)