Coronavirus begins shutting down public life across Germany | Germany | News and in-depth reporting from Berlin and beyond | DW | 12.03.2020

With Italy as a warning of what could come, large events in Germany have been canceled and many of those who can are working from home. But experts say public life must be curbed further still to slow the virus. 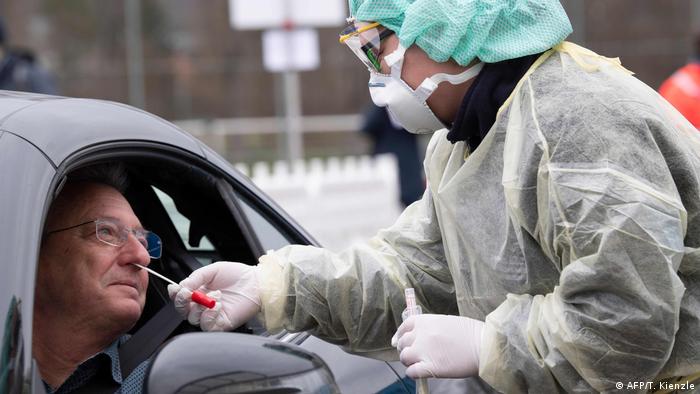 With the spread of SARS-CoV-2 pushing the number of confirmed cases in Europe higher by the day, the outbreak is beginning to have a visible effect on daily life in Germany and beyond.

Italy has taken the unprecedented step of placing the entire country of 60 million people under quarantine, limiting movement and shutting down public spaces for at least three weeks. Major events have been canceled, schools are shut nationwide, and all nonessential shops are to close, with people only authorized to move around for work or health needs. Riots have occurred in overcrowded prisons. The Corriere della Sera newspaper wrote that "the whole of Italy is closed."

Several European countries have begun to follow suit: Norway, Lithuania, Ireland and Austria have closed most schools. The list of closings is changing by the hour.

In Germany, which after Italy, France and Spain has the largest number of coronavirus cases in Europe, the government hasn't resorted to such drastic measures — yet. But a global survey conducted by research firm Ipsos already in late February showed that 62% of Germans would support quarantine measures, should they be deemed necessary.

These sweeping efforts to contain the virus came after an initial reluctance by some governments to significantly disrupt public life and, subsequently, destabilize their economies and cause panic. As recently as March 3, when the number of cases in Spain was already at around 200, the Health Ministry was stressing that there is still "not a great deal of transmission at the national level." By March 12, confirmed cases rose to nearly 3,000.

The slow response is reminiscent of how authorities in Germany, the UK and France initially restricted reporting during the 1918 flu pandemic, fearing it would lower morale as troops were still fighting World War I. Even Spain, which first reported cases of the flu — leading to it erroneously being dubbed the "Spanish flu" — at first "hesitated because they knew it would have a negative impact on the economy, especially the growing tourist industry," said Svenn-Erik Mamelund, a research professor at Oslo Metropolitan University in Norway, who has studied the social impact of epidemics.

Read more: What you need to know about US restrictions on inbound travel from Europe

How should hospitals prepare for the coronavirus?

Increasingly in Germany, businesses have been encouraging employees to stay away from the office, with a recent poll of more than 700 Germans by business consultancy Strategy& showing that 38% of respondents wanted to work from home. A third said they would avoid meetings, trade fairs and major events in the coming weeks.

In recent days, Health Minister Jens Spahn recommended that large public events be postponed or canceled, and nearly all of Germany's 16 states have now prohibited all gatherings with more than 1,000 people until at least April.

"We now know that we are in the current phase of the pandemic where we have to practically cut off all social contacts if we want to have any chance of keeping the number of infected people as low as possible," Patrick Larscheid, a public health officer in Berlin, told DW.

He called on officials in Berlin to take more decisive steps to halt the spread of the coronavirus. Public life must be temporarily restricted as much as possible to protect the larger population.

The decision to cancel events with more than 1,000 visitors didn't go far enough, Larscheid said. Any space where people come together in close contact should be closed.

"Otherwise we won't be able to control it anymore," he adds.

The Bundesliga, meanwhile, has announced that several upcoming football matches will be played in empty stadiums, with the German Football League (DFL) saying decisions would ultimately be made on a case-by-case basis. The German Cultural Council said the culture and media sector has already been "severely affected" by trade fair and event cancellations.  Some cinemas and theaters have reported customers asking for refunds, but the Association of German Film Theaters said earlier this week it is "currently not aware of any losses in sales due to the coronavirus."

Read more: Bundesliga: 'It's not normal to play without fans'

Health authorities say these restrictions are necessary to slow the spread of the virus, with German Chancellor Angela Merkel warning on Wednesday that nearly two-thirds of the country's population could become infected since people don't have immunity. The key right now is to buy time.

"Our solidarity, our common sense and our hearts for one another are being put to the test and I hope that we pass this test," she told reporters.

Merkel's party, the Christian Democrats (CDU), have canceled a conference scheduled for April 25 when Merkel's successor as CDU party leader was supposed to be elected.

While agreeing with these social distancing measures, Mamelund pointed out one unexpected side effect of epidemics: an increase in depression and other mental disorders. Referring to a study on the 1918 pandemic, which severely disrupted daily life for months and ultimately killed at least 50 million people worldwide, he said the "drop in social integration due to isolation and quarantine, mass gatherings being closed down and closing of schools and churches [and] the pain and sorrow due to losing loved ones to the disease all led to higher number of suicides."

While the current COVID-19 outbreak is not nearly as serious — and people today are arguably less isolated thanks to modern communication methods — Mamelund said he did expect to see large social inequalities when it comes to infection and mortality rates. He said poorer segments of society may have fewer opportunities to work from home and isolate themselves, along with reduced access to high-quality health care and a poorer overall health in general.

For now, the outbreak appears to have had little impact on spiritual activities in Germany. The country's two largest religions have so far reported no sign of a decline in attendance, according to a survey by the Evangelical Press Service of the regional Protestant churches and Catholic dioceses in early March.

Church authorities have emphasized preventative measures like hand-washing and the use of disinfectant, recommendations which have also blanketed public spaces and social media in recent weeks. Social etiquette experts have also chimed in to offer no-contact alternatives to the traditional handshake — a recommendation Merkel echoed on Wednesday, saying people should give a friendly look in the eyes and a smile instead of a handshake.

These prevention measures appear to be hitting home, at least with rail travelers. Railroad operator Deutsche Bahn has reported a 20% increase in the use of soap and disinfectant onboard its trains in recent weeks — though domestic train travel is slowing down too, given rising awareness of the need for social distancing and the numerous border restrictions that have been implemented in recent days.

Whether people will stick to improved hygiene and the all-important hand-washing guidance remains unclear. Mamelund, for one, isn't too optimistic, recalling the 2009 H1N1 flu pandemic which killed between 151,700 and 575,400 people worldwide, according to the Centers for Disease Control and Prevention.

"People were also better at washing hands in 2009, during the swine flu pandemic, but I think people went back to old poorer habits quite quickly after the pandemic was over," he said.

North Korea reported the outbreak of an unidentified intestinal epidemic, while it already faces food shortages and coronavirus infections. The outbreak was in the isolated nation's key agricultural region.