Bundesliga: 'It's not normal to play without fans'

An empty stadium, no atmosphere - the first match played behind closed doors in Bundesliga history was a bizarre event. The idea was to protect fans from the spread of the coronavirus, but some of them missed the point. 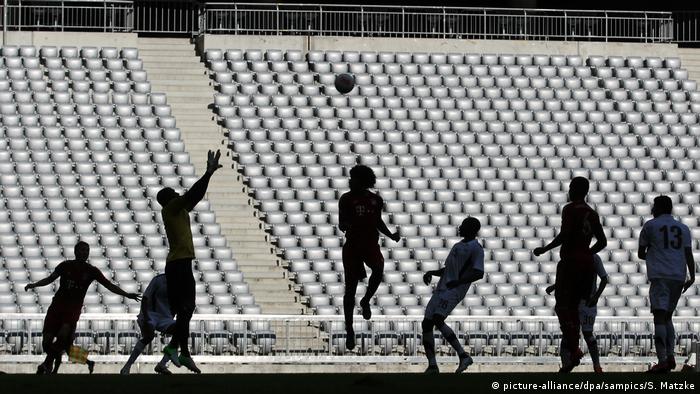 At last, the final whistle sounded.

The first game behind closed doors in Bundesliga history ended with a narrow victory for the home side, Borussia Mönchengladbach. A short cry of joy echoed through the empty Borussia-Park, soft music underlined the truly ghostly atmosphere as the players on the pitch applauded.

Read more: Coronavirus latest: Updates from the Bundesliga and beyond

And then? After a short period in which they seemed not to know what to do, the victorious Gladbach players climbed up the empty north stand and out into the concourse behind. They we're trying to get as close as they could to their supporters, who had gathered outside of the stadium and were by then loudly celebrating their team's 2-1 derby victory against Cologne. "

There were no goose bumps for the 90 minutes that preceded this celebration. Instead of what  usually would have been a highly charged emotional game, with both groups of supporters going at each other verbally with all their might, and the players carried along by the sheer emotion, all that could be heard on this Wednesday night were shouts between teammates and instructions from their coaches.

"It was unusual in a way. Everyone on the sidelines was a little more irritable than usual because you could hear more of what the opposing bench is saying and what the officials are saying to each other," Cologne coach Markus Gisdol said.

‘It's really something different'

Amid this new, unfamiliar situation, Borussia Mönchengladbach decided to forego most of the usual prematch fanfare. The PA announcer simply announced the team lineups and as the teams walked out onto the pitch, the Borussia hymn was played as always, but at a much lower volume than usual.

On both of Gladbach's goals (Breel Embolo scored the first,  before having a shot deflected into the Cologne netting by a Cologne defender for an own goal) the usual celebratory  tune blared from the stadium speakers. Some of the stewards and members of the club's staff got caught up in the moment, letting out brief shouts of joy.

After a few seconds, however, silence prevailed once again. A spooky kind of silence.

"It's really something completely different. It has nothing to do with football," said referee Deniz Aytekin after the match.

The "emotional" highlight of the derby was provided by the stadium announcer after just under an hour. Sounding slightly sarcastic, he announced the attendance: "There are none today," he said. A few members of the press in the media area suppressed a chuckle. 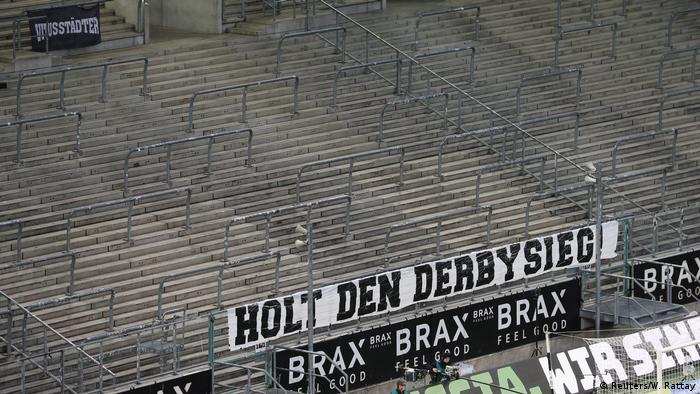 Before the match, Gladbach supporters did managed to hang up a banner encouraging their team to win the Rheinderby

Back to that "championship celebration" after the final whistle:  The whole point of the local authorities ordering that the match be played behind closed doors was to help curb the spread of the coronavirus. This point seems to have been lost on the hundreds of fans who gathered outside the Borussia-Park on Tuesday evening.

But had you expected to hear criticism from club officials, you would have been wrong.

"Climbing up the north stand, knowing there were fans outside, who suffered along with us, and who we also heard during the game. For all that wasn't nice today, it was a very emotional moment," said Gladbach coach Marco Rose afterwards.

But this is bound to be a major talking point over the next couple of days. All of this weekend's Bundesliga matches are to be played behind closed doors, including the Revierderby between Borussia Dortmund and Schalke. About 200 members of the media have been accredited and according to Dortmund, the home side, there should be a total of no more than 400 people inside the cavernous Signal-Iduna-Park on Saturday.

The question is: What will happen in front of the stadium? There simply mustn't be a repeat of scenes like in Mönchengladbach or at Tuesday's Champions League game in Paris, where about 5,000 people cheered on their team from outside the Parc des Princes. It's time for the fans to demonstrate that they have comprehended the seriousness of the coronavirus outbreak and be willing to forego what they love best.

Cancellation of the league not an issue for now

The German Football League (DFL), which operates the Bundesliga is to hold a meeting with the clubs on Monday. The subject: how best to deal with the coronavirus outbreak going forward. One possible outcome could be canceling or postponing Matchday 27.

Marco Rose, for one, doesn't even want to contemplate a more drastic outcome; calling the season off completely.

"I think we should try to keep the competition, the bit of normality we have, going for that long, even if it's not normal to play without fans."

Coronavirus: What you need to know about Bundesliga games played behind closed doors

There is much to suggest that Bundesliga matches could soon be played behind closed doors due to the coronavirus outbreak. What does this mean for both the clubs and the fans? We answer the most important questions. (10.03.2020)