Coronavirus: What you need to know about Bundesliga games played behind closed doors

There is much to suggest that Bundesliga matches could soon be played behind closed doors due to the coronavirus outbreak. What does this mean for both the clubs and the fans? We answer the most important questions. 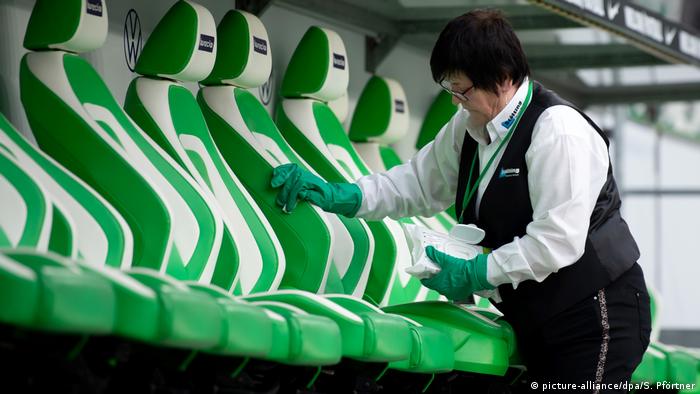 Who decides whether Bundesliga matches have to be played behind closed doors due the corona crisis?

Ultimately, the decision is in the hands of the health authorities in whatever municipality a match is to be played. German Health Minister Jens Spahn hasrecommended that all events involving more than 1,000 people be canceled, but only the local authorities actually have the power to order cancellations. "In truth, it is like an order," the health minister of the German state of North Rhine-Westphalia, Karl-Josef Laumann told ARD public television on Sunday.

"As a state, we can say quite clearly: We see that this has to happen. Mr. Spahn's recommendation also makes it easier for the local health authorities to decide these issues," he added.

Although the clubs are involved in the decision-making process, the German Football League (DFL), which operates the Bundesliga, has made it clear from the outset of the outbreak that it will comply with any orders by the local health authorities.

Read more: Coronavirus latest: Updates from the Bundesliga and beyond

Have Bundesliga matches ever been played behind closed doors?

No, it's only happened in the second division and lower leagues, and in each case it came as a result of fan misbehavior at a previous match. The first game behind closed doors in German professional football was played on January 26, 2004 in Aachen between Alemannia and Nuremberg. The DFL had ordered the replay in front of empty stands after Nuremberg coach Wolfgang Wolf had been struck in the head by a projectile in their first encounter of the season. The last game played in the absence of spectators in Germany was the third division match between Hansa Rostock and Jahn Regensburg on January 28, 2017. The German FA's (DFB) sports court had ordered the move after Rostock fans repeatedly set off pyrotechnics at a previous match. If games are played behind closed doors due to the coronavirus outbreak, it would be the first time in Germany that this has been caused by a medical crisis.

"There are contracts, sporting consequences, relegation and promotion. We need regular game operations. Stopping (the season) is not an option," DFL boss Christian Seifert has said. In fact, the Bundesliga calendar is extremely tight. This became apparent recently when a replacement date had to be found for the Bundesliga match between Werder Bremen and Eintracht Frankfurt. If Frankfurt continue to advance in the Europa League, the game may have to be put off until as late as May between the 33rd and 34th matchdays. Extending the season is not an option as the European Championship is scheduled to begin on June 12 — assuming the coronavirus crisis doesn't disrupt that too. 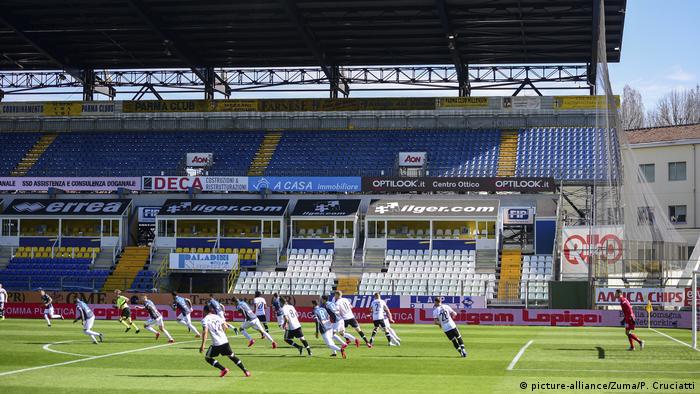 How much money do Bundesliga clubs stand to lose by playing behind closed doors?

In the 2018-19 Bundesliga season, ticket sales (€520.1 million, $590 million) accounted for almost eight percent of the league's record turnover of €4.02 billion. This works out to an average of just over €15 million per matchday. If all stadiums had the same capacity, this this would average out to €1.7 million per match. However, they aren't, of course, not by a long shot. The largest arena, in Dortmund, has a capacity of 81,365 seats, while the smallest, in Paderborn has just 15,000. So for a game played behind closed doors the likely loss of revenue due to lost ticket sales at BVB would likely be more than five times as high as a Paderborn. And that's not taking into account the lost income from the concessions stands and the fan shops, which tend to do a brisk business on match days. In some cases, clubs may also stand to lose significant revenue from in-stadium advertising.

Will the fans who have already bought tickets be able to get refunds?

Borussia Dortmund are the only one of the 18 Bundesliga clubs not to provide, under its conditions of sale, for the refund of the cost of tickets purchased in the event of a match played behind closed doors. In BVB's general terms and conditions it states that "in principle, no refunds will be made unless the organizer is responsible for the loss of the service." However, here the club also suggests a possible accommodation for the fans: "The organizer reserves the right to make a different arrangement in favor of the purchaser if he is not responsible for the cancellation of the service. The other 17 Bundesliga clubs all state that they will refund the purchase prices in the event of a match behind closed doors. Six offer vouchers for their fan shops as an alternative.