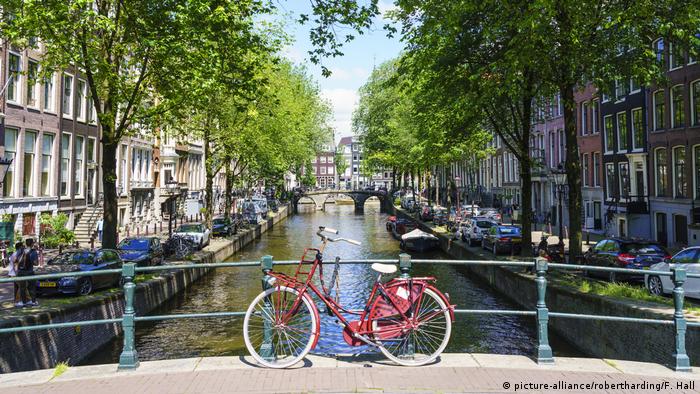 In the months since the pandemic began, Amsterdam's red-light district has been like a ghost town. The streets lining the canals — usually crammed with tourists — cater only to a few locals enjoying a beer in the sun. In the absence of international visitors, the sex shops, brothels, and bars in De Wallen remain empty.

"This is busy," says local design company owner Tim Spekkens, pointing at the two to three people passing by. "In the last few weeks, nobody has been around here. There's no reason for locals to visit the area anymore."

"This is an opportunity for the city to redefine itself a bit. I was shocked by how this neighborhood died after tourism stopped."

Amsterdam's tourism industry has been hit hard by the pandemic. Businesses in the red-light district have reported revenue losses of up to 90%, while hotel occupancy rates decreased from 81% in March 2019, to 41.2% in March 2020. 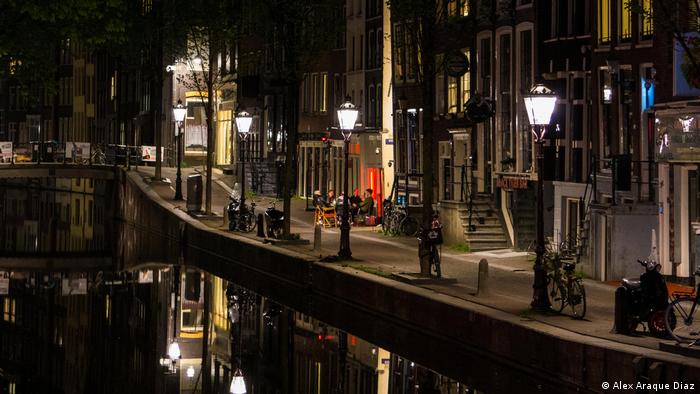 The red-light district in Amsterdam after the coronavirus outbreak

The current lack of tourists is strange for a city that has seen visitor numbers surge over the past decade. In 2019, an asphyxiating 19 million travelers visited Amsterdam —  a number that, pre-pandemic, was expected to increase 50% by 2030.

But, despite these numbers being greatly beneficial for local merchants, a certain type of tourist — the boozing, pot-smoking kind — was proving to be very bothersome to local residents, according to city officials.

"Some areas had become so overcrowded with tourists that people in Amsterdam didn't feel at home in their own neighborhoods. They felt like they were living in a city that didn't belong to them anymore," says Vera Al, spokesperson for deputy mayor Everhardt. 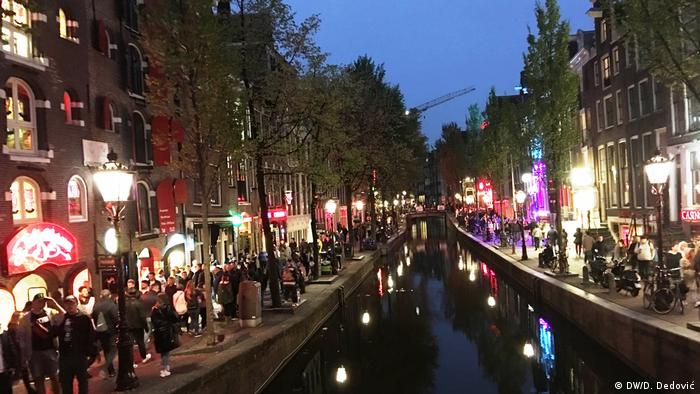 The red light district in Amsterdam before the coronavirus outbreak

Over the last two years, the council has adopted a string of tough measures to get a handle on these problems. Tourist tax has been raised to € 3 (US $ 3,38) per person per night, in addition to a 7% hotel tax per room, and tours of the red-light district were banned. New shops catering solely to international visitors — such as those selling wooden tulips, and vacuum-packed cheeses — were also forbidden.

In addition, to revitalize neighborhoods dominated by cut-price tourism, the council is pushing ahead with a ban on holiday rentals in three areas, including the red-light district, starting from July 1st. 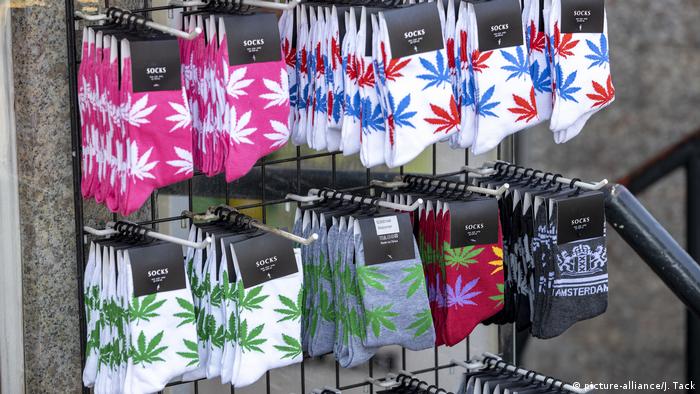 Popular souvenir in Amsterdam: Socks with a marijuana design

"We hope that this will attract locals back to the city center," says Al. "Our priority has always been to make Amsterdam more liveable for its residents, and we will continue to build on and strengthen these measures after coronavirus."

It remains unclear when international tourists will return to the Netherlands. City officials have been using the lull in visitors to create a more sustainable tourism industry for the time after the coronavirus pandemic.

"The aim is to create a visitor economy that doesn't harm the liveability of our city, and that takes into account the needs of residents and locals," explains Heleen Jansen, Corporate Communications Coordinator at the city's marketing agency, amsterdam&partners.

These plans include creating environmentally friendly mobility solutions, establishing an effective waste-management plan, and establishing a crowd management system to control busy places, among other measures.

With restrictions on non-essential travel in place until June 15th — and with KLM and other airlines running on reduced schedules until July 3rd –  Heleen is expecting a "gradual restart" to non-domestic  tourism. In the meantime, amsterdam&partners are creating local deals to encourage residents to explore their city safely, which will help support the reopening of businesses and the cultural sector.

Nationally, the Dutch tourism board NBTC is focusing on encouraging tourists to visit lesser-known, but equally beautiful, parts of the Netherlands — an aim that was outlined in its Perspective 2030report in 2018. 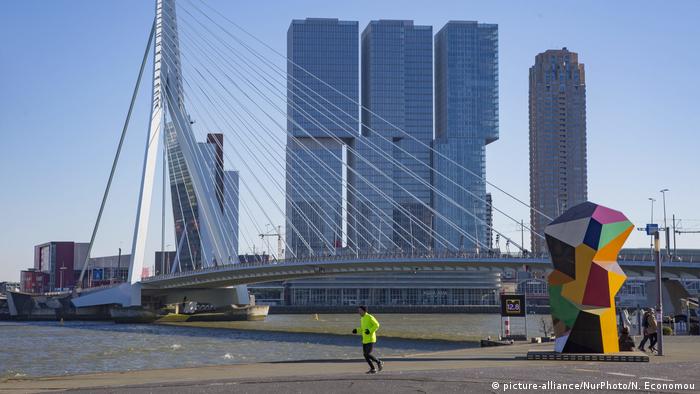 Rotterdam as an alternative: The port city attracts visitors with modern architecture and art

Elsje van Vuuren, spokesperson and communications advisor for NBTC, says that the board is helping Dutch cities ramp up their marketing efforts, and create quality culture and leisure activities to attract international visitors.

Tourists from neighboring countries Germany and Belgium, which before the pandemic comprised 40% of the Dutch tourism sector, are of great interest.

"The coronavirus hasn't reset our priorities for tourism in the Netherlands; we were already focusing on these aspects before the pandemic," says Elsje. But, with travel restrictions affecting movement of tourists worldwide, attracting visitors closer to home has become "more of a priority".

Part of the agenda is also to inspire Dutch people to travel domestically — which forms part of NBTC's plan to stimulate an industry revival and salvage the summer holidays.

Restarting tourism sustainably involves attracting visitors who will contribute to the Netherlands in a meaningful way, says Al. Amsterdam policy makers want to attract tourists who visit museums and cultural sites, rather than travelers who "come to party and smoke weed," she adds.

"It is very different to accommodate culture or history lovers, than stag parties which only use your city as a backdrop," she said.

The idea of handpicking tourists is controversial, however.

James Munt, who runs PureBoats canal tours in Amsterdam with Geertje Hesseling and Nick Mezas, thinks that discouraging "certain kinds of tourists" will affect the liberal culture of the city.

"When you think back to how Amsterdam was a few years ago, it was a rough and dirty city — and tha is still part of its charm. Turning the city into an elitist destination for museum-goers will ruin Amsterdam."

Erik-Jan Gingaar, General Director for Postillion Hotels, which has a 252-bed conference hotel in Amsterdam, is worried that efforts to control tourism could damage businesses.

Postillion Hotels has lost 70% of its bookings since mid-March and, and since reopening on June 1st, has been operating at just 10% capacity.

Gingaar says the Dutch capital has a complicated relationship with tourists. Hoteliers, for example, are weary of hosting stag parties, but they're also reliant on them for revenue.

"Ten years ago, the city of Amsterdam begged tourists to come, and now we have this issue of over-tourism. It's a little difficult to say what we want," he adds. 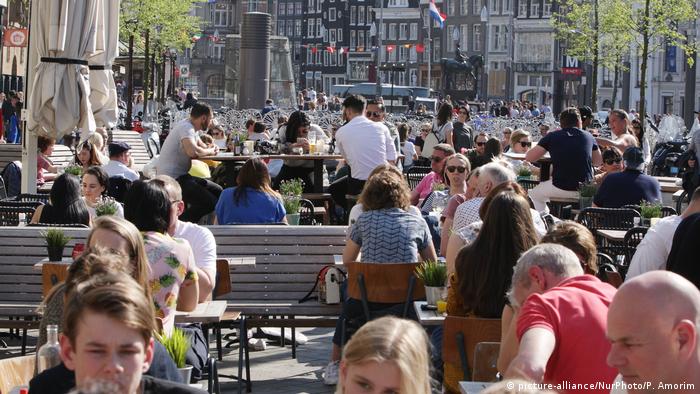 Amsterdam: There are 19 million tourists per year for a population of 800,000

Cody Reid-Dodick, who runs Good Beans cafe near the trendy Haarlemmerstraat, says the prejudice that a tourist tends to be a "drunk, British person taking a piss in the canal" undermines any sensible discussion on tourism.

"Actually, the average tourist isn't like that. Stag-dos in the red-light district may be more visible, but on any given weekend, we have hundreds of people staying at luxury hotels and trying new restaurants and supporting small designer boutiques."

Indeed, Randy Hoogeweegen, owner of AboutLifestyle menswear, a stone's throw away from Good Beans, says that the government should never forget how much income tourism generates for the city— (€ 82 billion a year according to government statistic.

"Of course, the government should control tourism but not to the point where people go out of business," he adds.

It's too early to say what effect government plans to quell over-tourism will have on Amsterdam — especially while the world remains in the grip of the coronavirus.

Amsterdam residents have said how much they enjoy the city without the marauding presence of tourists, and city officials are eager to maintain this tranquility.

"It's not like we can put a fence around the city and stop tourists from coming," says Al. "The most important thing is that residents feel at home again."

Moving the red-light district to another part of the city is an option Mayor Femke Halsema has already mooted this year — to reduce noise for residents and prevent sex workers being harassed by selfie-taking tourists. Whether this will happen or not remains to be seen.

Others in Amsterdam consider tourism to be part of the fabric of life in the city. Hoogeweegen says, "Amsterdam is always hectic, always crowded, but that's what you get in any a capital city."

"You cannot stop tourism in Amsterdam, otherwise it would no longer be Amsterdam."

Public health measures to curb the spread of the coronavirus have hit the Dutch domestic sex industry hard. Some of Amsterdam's sex workers continue to work illegally, risking their health to make ends meet. (11.06.2020)

What will be the future of tourism in Venice?

Thanks to COVID-19, Italy's lagoon city has been unusually empty, but visitors are now slowly trickling back. Some Venetians welcome the crowds, while others fear nothing more than the return of the rattling suitcases. (16.06.2020)

Coronavirus: Amsterdam takes a break from its tourists

The Netherlands is in a so-called intelligent lockdown. Staying at home is not mandatory, but encouraged. These images reveal a stark beauty and show what the city looks like without tourists. (12.04.2020)

Dining in separate mini-greenhouses in Amsterdam