Despite governments reaching a global climate agreement at the Glasgow conference, many have been left disappointed with the outcome. Climate campaigners say it's not enough to contain dangerous temperature rises. 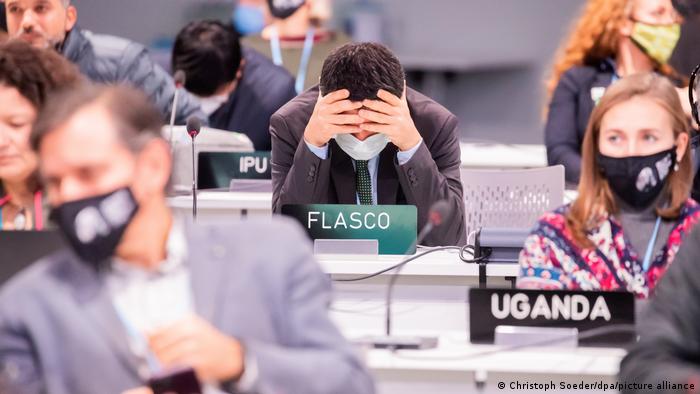 After two weeks of climate talks, many left Glasgow disappointed with the compromise negotiators reached

The deal "gives us confidence that we can provide a safe and prosperous space for humanity on this planet,'' said Ursula von der Leyen, president of the European Commission, the EU's executive arm. However, she warned "there is still hard work ahead" and stressed that "there will be no time to relax."

The EU's lead negotiator, Franz Timmermans, said the text agreed "keeps alive the Paris Agreement target of limiting global warming to 1.5 degrees Celsius." He also added that "it is a text which acknowledges the needs of developing countries for climate finance, and sets out a process to deliver on those needs.''

Germany's Environment Minister Svenja Schulze underlined that the pact would speed up global action against global warming and climate change.

"Glasgow is bringing a clear acceleration for climate change, and more speed is necessary," she said. "The fossil fuel era is coming to an end, the energy transition is becoming the model worldwide."

British Prime Minister Boris Johnson, whose country hosted the talks, said the deal was a big step forward and he hoped it would mark the beginning of the end of climate change.

"There is still a huge amount more to do in the coming years," Johnson said in a statement. "But today's agreement is a big step forward and, critically, we have the first-ever international agreement to phase down coal and a roadmap to limit global warming to 1.5 degrees.

"I hope that we will look back on COP26 in Glasgow as the beginning of the end of climate change, and I will continue to work tirelessly towards that goal."

There was last-minute drama at the conference, with India raising objections to the text related to coal use in the agreement.

Following India's objections, the language of the deal was watered down from "phasing out" to "phasing down" coal power, weakening the original text.

European countries, environmental campaigners and some small island states that are most under threat from global warming criticized the changes.

Tina Stege, the climate envoy of Marshall Islands, said that the package "is not perfect," pointing out that the change of text on coal and a weak outcome on loss and damage "are blows."

Still, she stressed that progress was made. "It is real progress and elements of the Glasgow package are a lifeline for my country. We must not discount the crucial wins covered in this package."

Alok Sharma. the British official who chaired the Glasgow talks, said he wished he had been able to preserve the originally agreed language on phasing out coal power in the deal.

"Of course I wish that we had managed to preserve the language on coal that was originally agreed," he said. "Nevertheless, we do have language on coal, on phase down, and I don't think anyone at the start of this process would have necessarily expected that that would have been retained."

US and China pledge more cooperation on climate

'Era of coal is ending'

US climate envoy John Kerry said governments had no choice but to accept India's coal language change, "If we hadn't done that we wouldn't have had an agreement." But he insisted the deal was good news for the world.

"We are in fact closer than we have ever been before to avoiding climate chaos and securing cleaning air, safer water and healthier planet,'' he said later at a news conference.

"They changed a word but they can't change the signal coming out of this COP, that the era of coal is ending," she said. "If you're a coal company executive this COP saw a bad outcome."

'Extreme disappointment' over 'loss and damage'

Vulnerable and poorer nations have argued for decades that rich countries owe them compensation for the irreversible damages from climate shocks.

But wealthy countries fear being found liable for natural calamities and having to pay massive sums in compensation every time an environmental disaster strikes.

As a result, no UN climate conference has resulted in any funding under the "loss and damage" tag for the countries most affected.

The Glasgow pact also failed to make much progress on the issue, given resistance from the US, the EU and some other rich nations.

Guinea, representing the developing-nation group at the talks, expressed "extreme disappointment" at the decision to initiate only a "dialogue" to talk about "arrangements for the funding of activities to avert, minimize and address loss and damage."

Low-lying small island nations that fear losing much of their land to rising sea levels — from the Marshall Islands to Fiji and Antigua — also said they were dissatisfied the fund they had called for had not been created.

Effects of deforestation in South America

Nothing but 'blah, blah, blah'

On Sunday, Pope Francis called on political and business leaders to act quickly on the measures agreed in Glasgow.

"I encourage all those who have political and economic responsibilities to act immediately with courage and farsightedness,'' he said.

UN Secretary-General Antonio Guterres said that the agreement was a compromise.

"The approved texts are a compromise. They reflect the interests, the conditions, the contradictions and the state of political will in the world today," he said.

"They take important steps, but unfortunately the collective political will was not enough to overcome some deep contradictions."

He also warned that our planet is "hanging by a thread" and that "we are still knocking on the door of climate catastrophe."

"The real work continues outside these halls. And we will never give up, ever," the figurehead of the Fridays for Future movement posted on Twitter.

Negotiators agreed to "phase down" coal and to completely "phase out" subsidies for fossil fuels. The last-minute change sparked "profound disappointment" from delegates and an emotional apology from the COP26 president.