At the nearly 300-year-old monument in Rome, visited by millions of tourists every year, tradition has it visitors can ensure eternal love by drinking its waters - not by swimming in them. 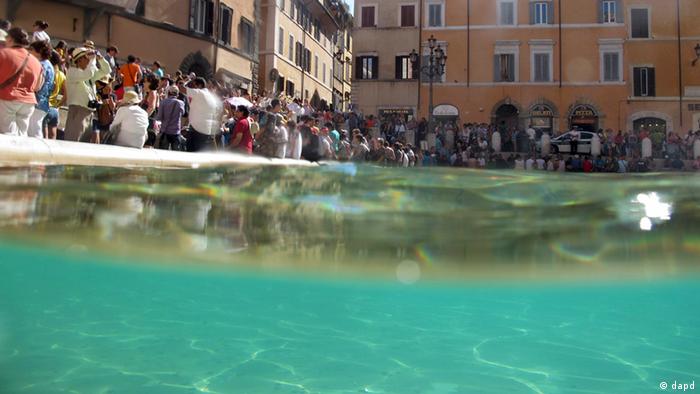 Cooling off with a midnight dip in Rome's famous Trevi Fountain may sound like a dream "Roman Holiday", but an Italian police crackdown has landed a series of splash-happy tourists with fat fines.

Police said Monday two young Californians were ordered this weekend to pay a 450-euro ($500) fine each after being caught trying to emulate Swedish star Anita Ekberg, who wades through the fountain's pristine waters in Federico Fellini's film "La Dolce Vita".

But with temperatures topping 35 degrees Centigrade (95 degrees Fahrenheit) in the shade in the Eternal City, the temptation to ditch guided tours and don swimming costumes for a refreshing plunge saw a British tourist hit with a fine last week too.

Police are on guard at other prime water holes across the city. In addition to the Californians fined at the weekend, a 22-year old American tourist was slapped with a fine on Sunday at the "boat" fountain at the bottom of the Spanish Steps, made famous in the United States by the 1953 film "Roman Holiday", starring Audrey Hepburn and Gregory Peck. And young Italians who stripped down to their underwear for a paddle in a fountain in Piazza del Popolo in the historic centre were tracked down by officers after they were betrayed by a selfie they had posted on Facebook.