Czeslawa Kwoka was 14 when she was photographed at the Nazis' Auschwitz death camp. Tens of thousands of social media users have reacted to recently restored and colorized versions of the original images. 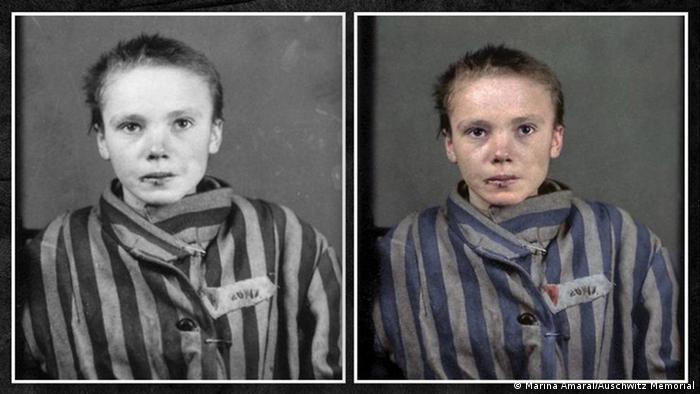 Recently colorized images of a 14-year-old Polish girl at a Nazi death camp have sparked widespread interest after the Auschwitz-Birkenau Memorial and Museum shared them on social media.

The museum first shared the registration photos of Czeslawa Kwoka, which date from December 1942, on Twitter on March 12.

Since then, the accompanying post has been shared more than 10,000 times and received over 250,000 media engagements.

"Thank you all for helping us to remember the past," the museum said in a tweet responding to the social media reaction. "We need to learn about this tragic history of Auschwitz to create a better and safer future."

The Auschwitz museum said German authorities had deported Kwoka and her mother, who were not Jewish, from the Zamosc region in southeastern Poland to Auschwitz to create "living space" for Germans in eastern Europe.

A guard had beaten Kwoka shortly before her registration photo was taken, according to Brasse's testimony. Her cut lip can be seen in the photo.

Her mother died three months after they arrived at the camp. Kwoka was murdered with a phenol injection to the heart a few weeks later.

Overall, the Nazis killed more than a million people, the majority of them Jews, at Auschwitz during the Second World War.

The image of Kwoka is one of hundreds of black-and-white photos of famous historic events and figures that artist Amaral has digitally restored and colorized.

Other photos she has colorized include portraits of US President Abraham Lincoln, Britain's wartime prime minister, Winston Churchill and the physicist Albert Einstein.

Amaral believes her work can help spark an interest in history. In a tweet, she wrote: "the colorization of these pictures is a very effective way to reach people that otherwise wouldn't have the slightest interest in learning more about our past."

Poland has passed a law criminalizing suggestions the country was complicit in the Holocaust. But as the much-criticized measure is set to take effect, it remains unclear whether it will even be implemented. (28.02.2018)