Susie and Wayne Payne support US President Donald Trump's closed-borders approach to immigration. Yet they are also fighting for one Guinean man's right to remain in the United States. Ines Pohl reports from Colorado. 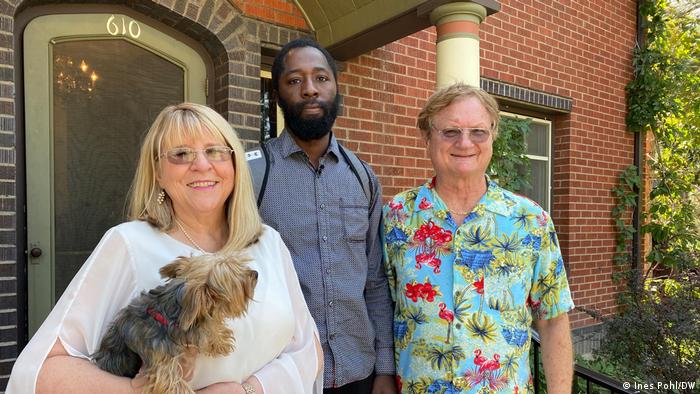 There is no doubt whom Susie and Wayne Payne are rooting for in the 2020 US presidential election. Every time they put a sign in support of President Donald Trump and his running mate, Mike Pence, in the yard outside their ivy-covered brick house, it is stolen, Susie said.

The Paynes live in Pueblo, a two-hour drive south of Denver in the mountain state of Colorado. The preelection atmosphere in this working-class town with a population of more than 100,000 people is electric. Trump, whom the Paynes think is the "best president," won Pueblo County four years ago here, but only by half a percentage point.

About half of the inhabitants of Pueblo are Latinx. And many voters are interested in the presidential candidates' proposed economic programs as well as their immigration policies.

The Paynes, who are both retired dentists, have lived in Pueblo since 1977. Life has not always been easy. "We were struggling with addiction problems and went through difficult times," Wayne said. The family almost fell apart, but in 1983 "we got a call from God." Wayne is now an elder at the nondenominational evangelical Christ Church Pueblo West, where he often preaches against abortion in the sermons he gives.

The Paynes are also in favor of more restrictions on immigration. "The Democrats would destroy our country," Susie said. "They would let everybody in."

So the Paynes pray for Trump to remain healthy so that he can be reelected and continue to focus on the borders. "We do need immigrants for the work no one else wants to do," Susie said. "But we can't allow everybody in. That is not possible."

Read more: Did Trump win the final US presidential debate?

The Paynes seems like the stereotypical Trump voters: white Christians who oppose policies to share the wealth  and pray for the president to remain in power so that their status will be preserved and abortion will be made illegal. Wayne, for example, said he worried that DW's reporting might not be accurate — or even be biased. "That's exactly what many American news stations do," he said.

Wayne's eyes welled up as he prayed for Idrissa Camara, a 31-year-old man from Guinea who faces deportation from the United States. He has lived with the Paynes on and off for six years and is like another son for the couple, who already have three adult children and six grandchildren. "He came as a legal immigrant," Susie said. His father was already in the United States when he arrived with two cousins at the age of 12. He was caught selling a small amount of crack cocaine in 2007 and incarcerated. When he was released, he was told that he could stay in the United States if he committed no more crimes. So he went to school, landed a stable job and started volunteering. Then he converted to Christianity from Islam and became a member of Christ Church. A friend of Wayne's baptized him.

In 2016, Camara met Arri Woodson, who worked at the same nonprofit as he did, and they fell in love. Camara continued to report to the immigration authorities on a regular basis, hoping to be granted permanent residency. He married Woodson, and they planned to start a family. He was not interested in politics. He was not worried about the immigration policies propagated by his host family's favorite president.

Read more: The final debate between Trump and Biden — as it happened

But, one day in 2018, he turned up to his regular meeting with officials from the Immigration and Customs Enforcement agency and was handcuffed him and taken away. ICE detained him for over 250 days. Now, he faces deportation to a country that he left over 20 years ago because he sold $90 worth of drugs as a teenager.

Woodson-Camara was not able to cope. When her husband was detained she became increasingly withdrawn. She shot herself in the heart nine months after his arrest.  "Anyone who voted for Trump cannot attend my funeral," she wrote in her suicide note. "You helped ruin my life."

The Paynes had found lawyers to fight for Camara's release as soon as he was arrested. But Camara was only set free two days after his wife died by suicide. And now he has no idea how his future will pan out.

The Paynes are still shaken by Woodson-Camara's death. They had been so glad that Camara had found a partner, and they too worry as he lives in constant fear of being deported.

Wayne called Camara a "wonderful person" who had made errors in his past. "God forgives us for our mistakes," he said. "We also have to do that."

Yet the Paynes also support Trump and his approach to immigration. They do not believe that he is responsible for what is happening to Camara because it is other people who deal with the individual cases.

"It is too easy to blame Donald Trump for everything," Wayne said. "Everyone can help people in need."

The Paynes will continue to pray for Camara and raise money to help him. They say that he can live with them for as long as he likes.

After all, that's what good Christians do.

This article was translated from German by ACT.