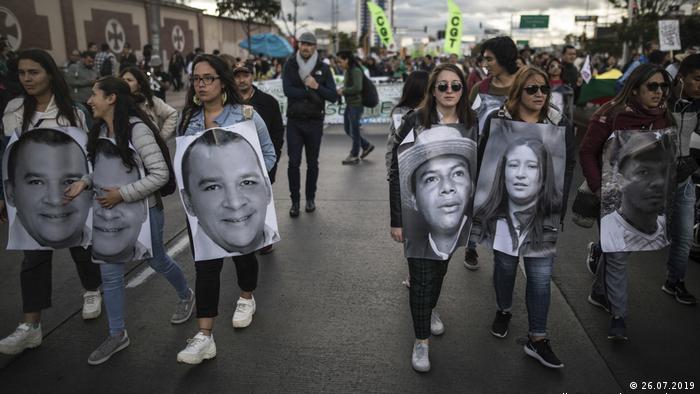 Thousands of people took to the streets across Colombia on Friday night to urge for an end to the killings of hundreds of human rights activists and social leaders by armed groups in the wake of the country's 2016 peace deal.

Marches took place in more than 50 towns and cities across the country, with protesters holding black-and-white photos of activists who have been killed. Some carried signs reading: "Without leaders there can be no peace" and "No more bloodshed."

The protests on Friday were organized after the murder of community leader Maria del Pilar Hurtado last month. In a video shared widely on social media, one of Hurtado's young children is seen screaming with grief near her body.

"We want an end to the selective and systematic murder of social leaders ... who are defending the right to live in their territories, the respect for biodiversity, respect for the peace accord," said protester Gloria Cuartas in the capital, Bogota.

Colombian President Ivan Duque voiced his support for the Friday demonstrations, despite pushback from some in his conservative Democratic Center Party, which opposed the peace deal with the Revolutionary Armed Forces of Colombia (FARC).

"We all are the echoes of a single voice because we all reject violence against social leaders," Duque said in a speech from the coastal city of Cartagena.

There is disagreement about the exact number of those who have been killed, but Colombia's human rights ombudsman says at least 486 social leaders have been murdered since 2016.

The attorney general's office puts the figure at 292, while the peace and development think tank INDEPAZ says up to 734 activists have been killed.

The activists have been targeted by several armed groups including guerillas with the National Liberation Army (ELN) and FARC fighters who have refused to disarm under the deal, as well as criminal gangs.

Many of those killed were supporters of environmental causes, and worked to combat illegal mining and drug trafficking.

Some also backed programs for farmers who plant coca, the base ingredient in cocaine, helping them to substitute their crops for legal crops.

The deadly violence has cast a shadow over Colombia's efforts to move forward from over a half century of armed conflict, which has killed some 260,000 people.

Fear has returned to Colombia, two years after the government signed a peace deal with FARC rebels. Real peace remains an illusion, as this week’s bomb attack has shown. Ofelia Harms Arruti reports from Bogota. (20.01.2019)

Colombia's parks: From FARC to tourists