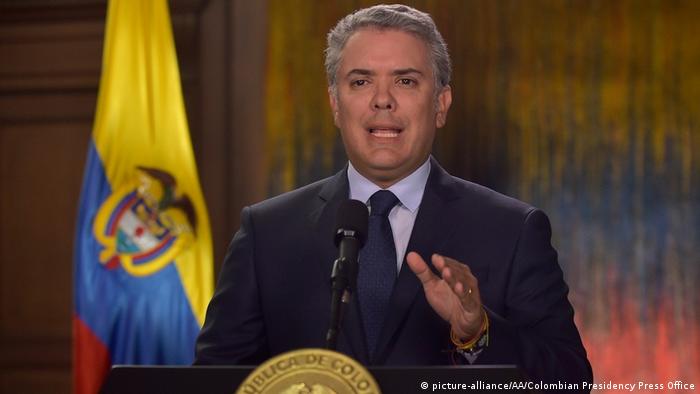 Colombian authorities are investigating an alleged militant plan to target President Ivan Duque during a scheduled meeting with indigenous communities on Tuesday.

"We have reliable information that ... some armed organized groups, which have infiltrated this social and indigenous movement, would like to carry out a terrorist act that could affect the safety of the president himself," Attorney General Nestor Martinez said.

Members of the indigenous community have been protesting for weeks in the country's southwest, calling on the government to uphold their land and sovereignty rights.

Tuesday's planned meeting between Duque and indigenous representatives aimed to bring the demonstrations to an end. The government agreed on Saturday to invest more than $250 million (€222 million) in indigenous communities. 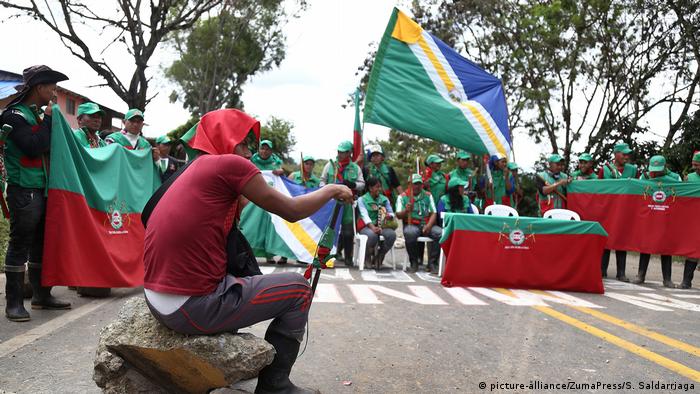 As part of the so-called "minga" protests, thousands of indigenous people have been blockading the Pan-American highway in the state of Cauca, leading to food and fuel shortages in some cities and costing the country millions.

The attorney general said authorities had launched a criminal investigation after intelligence gathered "several weeks ago" showed armed groups had infiltrated the minga movement. But he did not say if any alleged conspirators had been arrested.

The prosecutor added that authorities had "electronic evidence" and "testimony from reliable sources," including information about "a high-precision weapon."

Defense Minister Guillermo Botero told journalists Duque's meeting in the southwestern town of Caldono would go ahead, despite the alleged plot, but that the location would be decided by the president's security staff.

The tribunal was created to help implement the 2016 peace deal between the government and rebels from the Revolutionary Armed Forces of Colombia (FARC) after five decades of conflict.

Duque wants to modify the court, complaining it is too lenient on former guerrillas. But his desired changes, which include toughening the rules on the sentencing of war crimes and facilitating the extradition of former rebels, are unlikely to be approved. His coalition holds less than half the seats in the lower house, and critics argue his actions could derail the peace process.

In cities across Colombia, thousands of people marched for peace after Thursday's car bombing attack that killed 20 police academy cadets. President Duque cancelled peace talks with ELN rebels in response to the attack. (21.01.2019)

Authorities said a man linked to the National Liberation Army guerrilla was the driver of the car bomb that killed 21 people in a Bogota. President Ivan Duque accused the ELN of lacking "true desire for peace." (19.01.2019)

Polls have pointed to leftist candidate Gustavo Petro winning big, but not necessarily enough to avoid a second round. A win for the ex-guerrilla would mark a substantial shift in Colombia's political tradition.