Ivan Duque has issued an apology after police cadets were pictured dressed in Nazi-style uniforms as part of "cultural exchange." The head of the academy has been sacked. 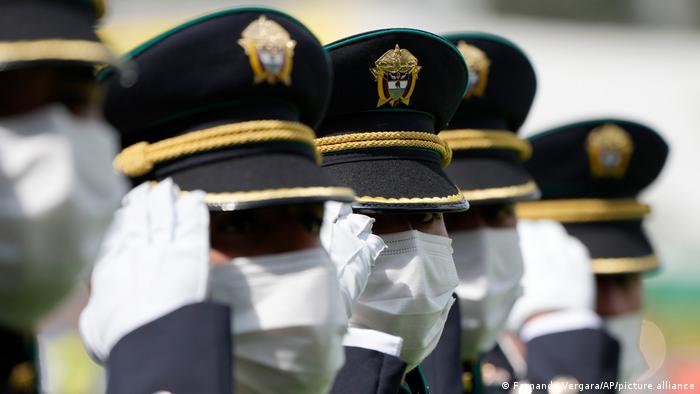 A Colombian police academy's decision to have cadets dress in Nazi-style uniforms as part of a "cultural exchange" has caused outrage and embarassment.

The event, which was meant to honor Germany, has also had a number of diplomatic consequences, with various statements of condmenation being made.

Police cadets were pictured in uniforms with Nazi symbols along with Nazi flags and regalia. The pictures were shared widely online.

The incident has caused deep embarrassment right up to the presidency and forced the country's President Ivan Duque to issue an apology while condemning Nazism.

"Any excuse for Nazism is unacceptable and I condemn this event and the symbols used which make us think of those who were responsible for the Holocaust," Duque tweeted. "Anti-Semitism has no place in this world."

The incident took place at the Simon Bolivar Police School in the city of Tulua, in the western part of the country.

According to a police Twitter account which publicized the event, "cultural exchanges" were being held at the police academy and that they were "strengthening the knowledge" of police students.

One of the participants had dressed up like Adolf Hitler alongside flags of the Federal Republic of Germany, while those wearing uniforms appeared to have cutouts of SS insignia and swastikas.

Joint condemnation from Germany and Israel

The embassies of Germany and Israel issued a joint statement condemning the incident and expressed "total rejection of any form of apology or demonstration of Nazism."

The head of the academy was dismissed from his post.

Colombia's police have been attempting to change the image of the police after being widely criticized for the brutal manner in which they clamped down on anti-government protests earlier in the year. Among the changes that will be coming into effect will be a uniform change.