President Ivan Duque and other top Colombian officials were flying near the country's border with Venezuela during the attack. No one was hurt in the incident. 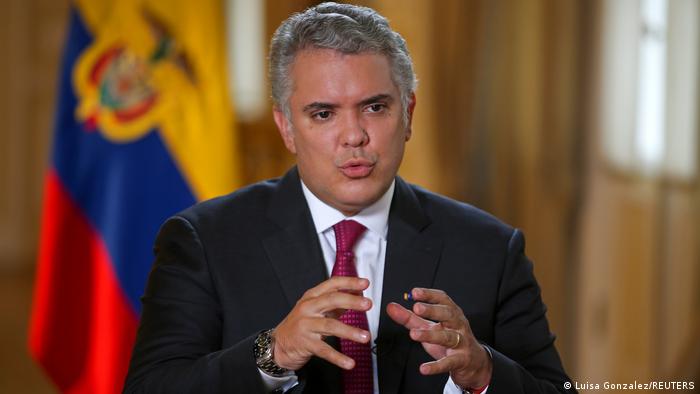 Colombian President Ivan Duque said Friday that a helicopter carrying him and other top officials was hit with bullets as the aircraft flew near the country's border with Venezuela.

What did Duque say about the attack?

"It is a cowardly attack, where you can see bullet holes in the presidential aircraft," Duque said in video remarks.

In addition to Duque, the helicopter was carrying Defense Minister Diego Molano and Interior Minister Daniel Palacios. Silvano Serrano, the governor of the Norte de Santander province neighboring Venezuela, was also onboard the aircraft.

No one was hurt by the attack. Duque said the helicopter's equipment "prevented something lethal from happening."

The helicopter was flying over Colombia's troubled Catatumbo region and was heading towards Cucuta, the capital of Norte de Santander.

Catatumbo is home to the National Liberation Army (ELN), a leftist armed group. The group is listed as a terrorist organization by the US State Department and the EU.

A car bomb went off in Cucuta and injured dozens of people earlier this month. Colombian authorities blame leftist rebels for the attack, but the ELN has denied involvement.

Duque is a controversial figure in Colombia.

Thousands of Colombians have poured into the streets over the past few months to protest Duque's contentious tax and health care reform policies, with the government cracking down on demonstrators in a heavy-handed response.