"The Best in Heritage" is a commendation given to a handful of museums worldwide. Amsterdam's Anne Frank Museum has one -- and Cologne's Nazi Documentation Center does too. 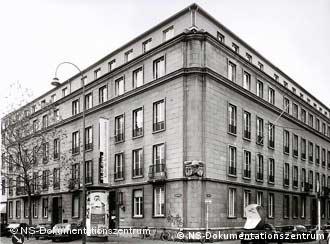 The EL-DE Haus in an earlier era

In 1934, the Nazis seized the building from Dahmen, and turned it into the headquarters for the state secret police. Prisoners were forced to build their own torture cells in the basement of the building, while Gestapo officers carried out business as usual on the upper floors.

By a twist of fate, the building survived the bombing of Cologne -- which destroyed some 90 percent of the buildings standing in the city's downtown. Afterward, the basement torture cells were used as storage rooms for wartime files and paperwork.

An exhibit at the EL-DE Haus features Martha Mense, a Communist and resistance fighter during the Nazi era who herself was interrogated there. She spent five months in the EL-DE Haus, and was sentenced to two and a half years in jail for "preparation for treason" for printing anti-Hitler leaflets. The bombing of Cologne flattened most of the city

In her chilling words, Mense explains how it was at the time: "There were office rooms, where the Gestapo men sat. They had different rooms where interrogations were held, like mine. The men were interrogated downstairs. Mostly they were brought to the cellar. We could hear the screams. They opened the cell doors, so I could really hear those screams. It was supposed to affect me."

After the war, Mense led school groups through the tiny torture cells. She died in 1998.

Award is 'honor and incentive'

Since the beginning of the 1980s, the number of visitors and school groups has grown. They are interested in the center's wealth of historical information on National Socialism, such as eyewitness interviews, a media center and various exhibits.

The museum's director, Werner Jung, said it is a "special honor and also an incentive" to have garnered the "Best in Heritage" title. The European Heritage Association awards the designation once a year in Dubrovnik, to the world's best museums and cultural heritage projects.

The National-Socialist Documentation Center and the Buddenbrook Museum in Lübeck are the only two German museums to have won the prize. The Anne Frank House in the Netherlands has received it, as have museums in Britain, Croatia, Cyprus, Finland, Greece and Russia.

Cologne University Grapples With its Nazi Past

Sixty years after the end of the Nazi regime, Cologne University organized a ceremonial act to rehabilitate the academics whose doctoral titles were revoked between 1933 and 1945. (Dec. 22, 2005)

The International Organization for Migration has just completed final compensation payments to more than 80,000 survivors of slave and forced labor under the Nazis in World War II. (June 6, 2005)