The NATO airstrikes in Serbia put a stop to the crimes against the Albanians in Kosovo 15 years ago. But the bombs also killed many civilians. In the village of Varvarin, people still remember the attacks. 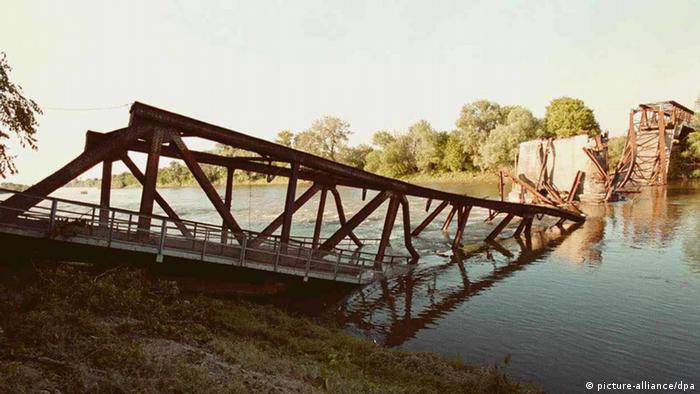 Two broken cottonwood trees stand next to the bridge at Varvarin. They are a stark reminder of May 30, 1999, the saddest day in the village's history. "It was a Sunday, a sunny day with no clouds," Zoran Milenkovic, mayor of the small town in central Serbia with 2,000 inhabitants, says. "Because of the market that day and the orthodox Holy Trinity celebration, Varvarin's streets were full of people."

Run, they're coming back!

The robust man with the full beard is wearing a leather jacket. His voice doesn't seem to match his body - he's talking softly, in an almost melancholy tone. On the day of the festival, the air raid sirens did go off, Milenkovic recalls, but after two months of bomb warnings, no one took them seriously anymore. What could possibly happen at noon-time in a village that had neither an army-base nor any other military targets?

But May 30, 1999, dramatically changed Milenkovic's life. 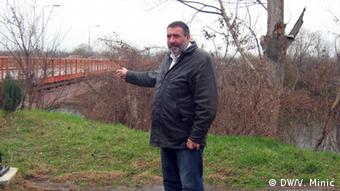 Milenkovic still comes back to the place where his daughter was killed.

When NATO warplanes appeared in the sky, his 15-year-old daughter Sanja was on the bridge with two friends. The high-tech bombs destroyed the bridge; the three girls were severely wounded. "My daughter Sanja didn't survive," Milenkovic says.

After the attack, the shocked citizens tried to help the injured. "You could hear them screaming for help," Miroslav Dakic says. "I was already in the river when someone yelled 'Run, they're coming back!'" With the bridge already in pieces in the river, the planes returned and dropped more bombs. "The detonation threw me to the cottonwood trees ten meters away," Dakic recalls. The bombs damaged his right leg, which is six centimeters shorter than his left leg as a result. Medical authorities officially declared him "60 percent disabled."

"Victory over evil always comes at a price," NATO spokesman Jamie Shea would later say. In his vocabulary, Varvarin's ten deaths and 30 wounded are only collateral damage. The West's intervention in Yugoslavia (which at that point only consisted of Serbia and Montenegro) stopped the displacement in the region. Most importantly, it put a stop to the crimes the Milosevic-regime had committed against the Kosovo-Albanians in the former south-Serbian province of Kosovo.

But the NATO air strikes also left 2,500 civil victims in their wake, according to Serbian sources. The NGO "Human Rights Watch" speaks of 500 dead civilians. The devastating case of Varvarin shows that many of these people died even when they weren't near strategic or military targets.

Berlin lawyer Ulrich Dost represented the victims of the bombing in 2001, suing Germany as a NATO member for eight million Deutsche Mark (roughly four million Euros) in damages. In court, Dost said that the bridge in Varvarin had no military significance and that it had to be clear to the people in charge that the attack would only kill civilians.

No validation from court

The regional court in Bonn rejected the claim in 2003, saying that individuals couldn't sue a state because of war acts. A repeal at the Constitutional court in Karlsruhe was also unsuccessful. "We knew the state immunity under international law would be a problem," Dost says. "We wanted to shake up the political consciousness." But according to the lawyer, nothing much has changed: "The states don't want to alter international law. They still like to go to war, just like they did in 1999."

In 2013, the same court saw a lawsuit brought on by victims of another NATO bombing. Family members of Afghans who were killed in an air strike in Kunduz in 2009 sued the German government for damages. The claim was rejected as well; the victims' lawyer announced he'd repeal. 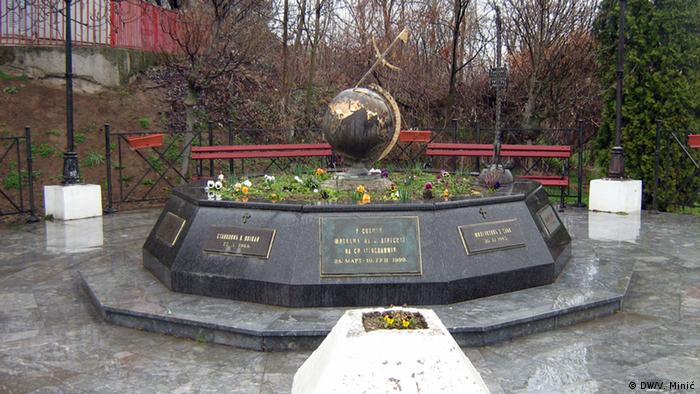 Varvarin commemorates the victims of the NATO bombing with this globe and drawing compass, whose tip points to Serbia.

Varvarin's mayor is standing next to the memorial for his daughter and the other victims. Zoran Milenkovic never expected damages from Germany. "That would have equaled an admission of guilt - and I knew they were never going to stand by their crimes," Milenkovic said. The only thing that satisfies him is the worldwide media interest in the Varvarin case: "It's important to me that people hear the truth about the NATO aggression."

Ten days after the bombing of Varvarin, Milosevic signed the peace treaty that led to the Yugoslavian troop withdrawal from Kosovo. Varvarin's bridge was reopened in November 1999. This Monday (24.03.2014) marks the 15th anniversary of the beginning of the NATO airstrikes against Serbia that culminated in the attacks on Varvarin. It will be a day of grief in the Serbian village for all those who remember.

Croatia has sued Serbia for genocide during the Balkan war, and Serbia reacted with a countersuit. Legal experts see little chance of success for either side in hearings starting Monday in The Hague. (01.03.2014)