A German court is slated to make legal history on Wednesday when families of civilians killed and injured in a 1999 NATO bombing on the Serbian town of Varvarin press for compensation. 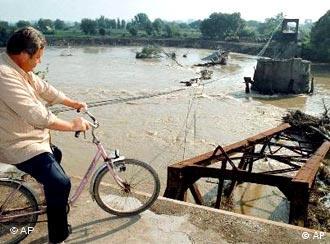 35 Yugoslavians are suing Germany over a deadly 1999 NATO bombing attack.

May 30, 1999, started as a quiet Sunday in the small town of Varvarin in the Serbian enclave of Montenegro.

The market in the town square teemed with its usual customers. The Orthodox church service for the celebration of the Holy Trinity had just ended and people were heading home. The isolated town of 4,000 was far removed from the breakaway province of Kosovo where Slobodon Milosevic’s Serbian army was brutally suppressing ethnic Albanians and fighting off NATO air raids.

But all that changed when, shortly after noon, two F-16 fighter jets ripped through the sky and unloaded four laser-guided 2,000-pound bombs on the town’s bridge. The first two bombs destroyed the bridge and killed three people, including a 15-year-old girl, and severely injured five more. A few minutes later, just as the first civilians rushed to the scene to help, two more bombs fell from the sky, bringing the death toll up to 10 and wounding dozens more.

A German reporter for the weekly newspaper Die Zeit was on the scene and described the brutal attack as a "blood bath" and a "war crime."

In the first such case to be brought in Germany since World War II, relatives of the victims are seeking €3.5 million ($4.1 million) in damages from the German government. They claim that Germany, although not directly involved in the attack, knew of and approved the bombing despite the bridge’s obvious civilian usage. Germany is in this case representative for all of NATO, explained the Hamburg lawyer Gül Pinar, who also criticized the government for sanctioning an attack without warning on a civilian target on a church holiday.

The lawyer for the relatives, Ulrich Dost, says the 35 Serbs are suing on the basis of a 1977 protocol added to the Geneva Convention which calls on signatories, including Germany, to distinguish between civilians and the military and "direct their operations only against military objectives." The bridge in Varvarin, he added, had no military significance.

NATO has defended the bombing and said the bridge was a "designated" and "legitimate" target, and served as key infrastructure for the Serbian army fighting in Kosovo.

But an independent inquiry found that the bridge was only capable of supporting a maximum 12-ton load, making it too small to carry military equipment. In addition, no military infrastructure was found near the town, which lies in a rural area, 180 kilometers southeast of Belgrade and 200 kilometers away from the fighting in Kosovo.

The suit, for which deliberations began in a regional court in Bonn on Wednesday, is thought to be the first of its kind in Europe and could serve as a precedent for others seeking compensation from NATO’s 19 members in similar conflicts involving the military alliance.

"It’s a test case," the spokesman for the regional court, Daniel Radke, told reporters early Wednesday morning at the start of the hearings. If it loses the case, Germany, which served as a strong advocate of the two-and-a-half month NATO campaign to end Serbia’s ethnic-cleansing of Kosovar Albanians, could become a template for future cases.

But the German government argues that such a precedent case should not be brought up against Germany since neither the pilots nor the airplanes were German. In a statement issued ahead of Wednesday’s hearing, the German Defense Ministry pointed out that the Geneva Convention also states that civilians have no right to personal compensation from governments for damages suffered during war.

The interpretation of the convention, however, now lies clearly with the Bonn court hearing the case.

Zoran Djindjic, the man who made many enemies as he tried to transform the Serbia of Slobodan Milosevic, was assassinated on Wednesday. Germany pledges to continue to support the young democracy. (March 12, 2003)