Police called in the special forces to deal with climate protesters in the northern German port of Kiel. About 50 people blocked the departure of the vessel, saying that "cruises kill climate." 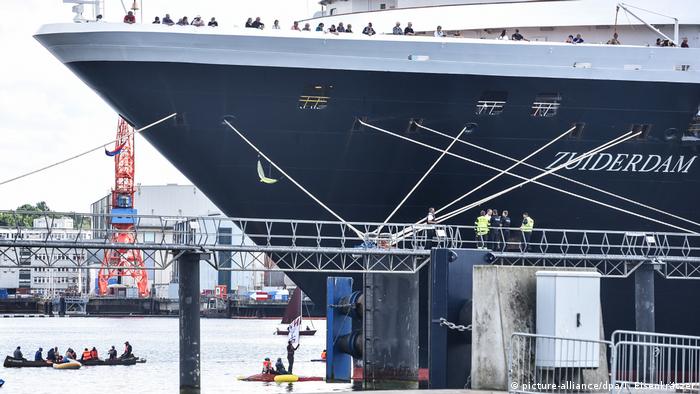 About 50 climate protesters blocked the departure of a cruise ship from the German port of Kiel on Sunday, trying to call attention to the "catastrophic local and global consequences of cruises" as well as the poor working conditions aboard.

A group calling itself Smash Cruiseshit used small boats and climbing equipment to delay the Zuiderdam, owned and operated by the British-American cruise company Holland America Line. They also occupied a crane on the harbor quay.

A police operation to clear the protesters took several hours and involved special forces. Police eventually arrested the protesters and confiscated their vessels, leaving the ship free to depart at about 10 p.m.

During the protest, the activists unfurled a banner that read "Cruises kill climate." The group and associated climate organizations posted live updates of the action on Twitter.

According to German nature organization Naturschutzbund Deutschland (NABU), a single cruise ship can emit as much pollution as 1 million cars, when looking at certain pollutants, due to the use of heavy fuels.

Read more: Hoping for a fresh sea breeze aboard a cruise ship? Better hold your nose!

Cruise ships are phasing out the use of high-sulfur fuels, but are generally circumventing emissions targets by using seawater systems to wash their dirty fuel and flush the pollutants back into the water.

Action group Friends of the Earth has rated international cruise liners for their environmental damage. Overall, Holland America Line was middle of the pack with a C grade; however, the Zuiderdam ship was ranked highly for its environmental controls.

What's the environmental impact of cruises?

A German family received an unwelcome surprise after returning home from a family cruise to Norway. The son had used just under a half a gigabyte worth of data while at sea, and was billed more than €12,000 as a result. (14.06.2018)

Authorities on St. Lucia say they quarantined a ship owned by the Church of Scientology after a case of measles aboard. This comes as the world sees a resurgence of the sometimes deadly disease. (03.05.2019)