Hoping for a fresh sea breeze aboard a cruise ship? Better hold your nose! | Environment | All topics from climate change to conservation | DW | 26.01.2017

Hoping for a fresh sea breeze aboard a cruise ship? Better hold your nose!

French TV journalists have secretly measured the air quality on a cruise ship. The results are devastating: The air is significantly worse polluted than it would be in thick urban traffic. 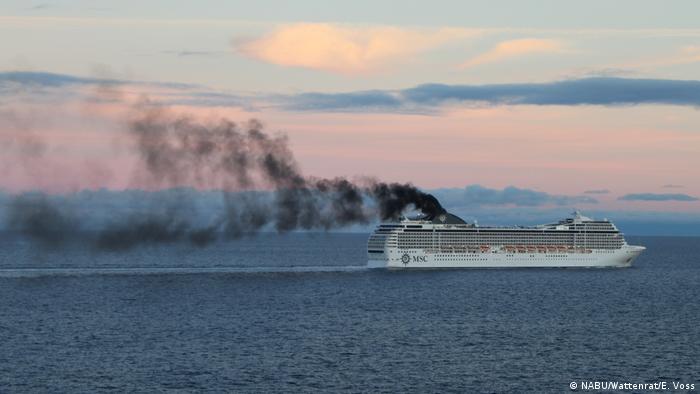 Cruises are increasingly popular among today's tourists. They offer relaxation with 24-hour service for stressed out office workers.

Forget about searching for the perfect, pristine beach - which most people will never find, anyhow. Instead, just go to the pool on the upper deck, enjoy some tasty drinks and take in breathtaking views of the ocean from high above. For people who need less contemplation, cruises offer theater and show performances, generous meals, bars and shopping opportunities.

That doesn't mean you're in for a boring vacation: Adventure comes as part of the risk free deal. Even frail seniors can now feel like mystic characters such as Long John Silver from Treasure Island or real explorers like Roald Amundsen - be it by cruising the romantic Carribean, visiting savage South Sea islands or admiring polar bears on impenetrable arctic shores. Finally you can do something for your health by going to the ship's gym and getting a good work out. 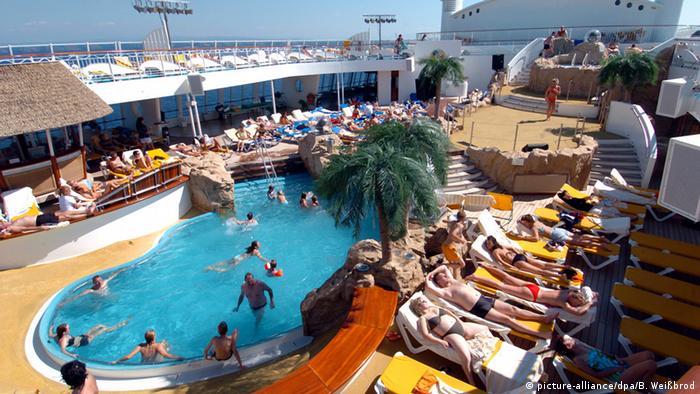 Tourists want to enjoy themselves - and the fresh sea breeze.

But you better think twice about taking a deep breath. The German Environmental Association "Naturschutzbund Deutschland"(NABU) now warns that it is more likely you inhale polluted air than a fresh breeze. NABU says that it cannot recommend any of the large European cruise ships.

"Pamphlets lead you to believe that there are blue skies and white ships - a dream-like setting," Daniel Rieger, who is in charge of transportation policies at NABU, said. "The truth is that clouds of black soot are emitted from the funnels."

Measuring results are worse than expected

Recent measurements of actual air quality onboard a cruise ship seem to support NABU's view. French TV journalists from broadcaster France 3 conducted covert measurements while on a cruise. They boarded a ship in Marseille for a cruise of the Mediterranean.

Even environmentalists were surprised by the high concentrations that the journalists detected. Right after leaving Marseille, air pollution was roughly 200 times that of a heavily trafficked urban street.

Besides fine dust and soot, the combustion of marine diesel fuel and heavy oil also set free other harmful substances such as nitrogen oxides and heavy metals. 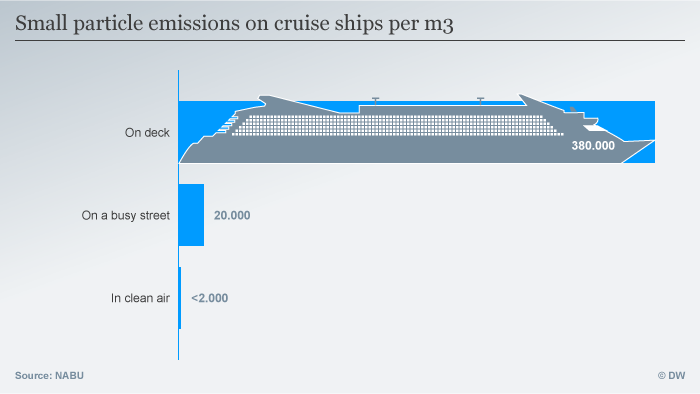 Former captain and ship broker Helge Grammerstorf, who is the German national director of the Cruise Lines International Association CLIA, defends his industry. He told the daily "Hamburger Abendblatt:" "We don't know these measurements. The claim is completely unsubstantiated."

Grammerstorf argues that the measurements were taken only selectively and that one would need to run a more systematic test to collect data over a longer time period.

"The passengers can only smell or see the particles before they get mixed up with the ambient air," NABU spokesman Rieger said after the France 3 test results were published.

He argued that it wouldn't take the shipping companies much to change the pollution and to increase comfort. "Even switching from marine diesel fuel or heavy oil to regular road diesel fuel would make a big difference," he said.

In addition, it wouldn't be too hard to install effective exhaust cleaning systems, according to NABU. Such systems have long existed with established standards for trucks and trains.

"The question is whether the industry deliberately looks the other way," Dietmar Oellinger - NABU's transport expert - said.

He suggested that the tests taken by the French journalists were merely an example and could possibly be representative for the entire cruise ship industry. 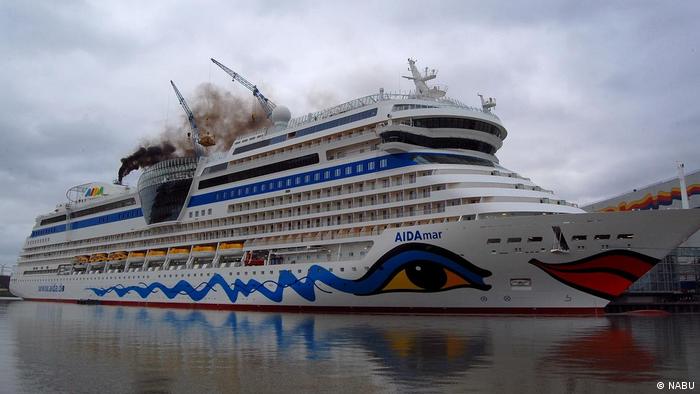 "The reality is black soot from the chimneys," NABU environmentalists say.

"We should ask how much more proof the industry needs before they finally take action," Oellinger said.

Some cruise lines have pledged to install particle filters, but so far, there are none in use.

Covert measuring only in the harbor

Previously, NABU has only had the opportunity to measure harmful ultra fine dust particles in the air around cruise ships in harbors. They have done so in Hamburg, Venice and the north-eastern German city of Rostock-Warnemünde. The ship owners did not allow the environment agency to take measurements on board, Daniel Rieger said.

The results were devastating nonetheless: In all cases the ships were burning off heavy oil. Four of five ships were not equipped with any exhaust gas cleaning or they were only fulfilling the lowest legal standard for northern Europe - a system that only reduces sulfur oxide emissions.

Technical solutions to reduce particle and nitrogen oxide emissions have long been on the market, though. Therefore, NABU argues, not implementing them is largely due to greed. It would cost money to install the system and furthermore require the companies to use more expensive types of fuel.

Almost as dangerous as asbestos

The German Lung Foundation already recommended several years ago that people with chronic respiratory diseases only stay on certain parts of the deck when on a cruise ship and thus avoide breathing in the ship's exhaust.

The World Health Organization (WHO) has concluded that diesel exhaust is just as carcinogenic as asbestos. The ultrafine particles, which are smaller than 0.1 micrometer can get into the smallest pulmonary alveoli and from there into the blood stream and other organs.

NABU manager Leif Miller argues it's cynical that the cruise ship companies "pay huge sums to improve entertainment and gastronomical services on board, but save as much as they can when it comes to environmental protection."

Meanwhile, in Germany the cruise ship industry is getting ready for the next season: In Warnemünde, Hamburg and Kiel alone, more than two million passengers are expected to board the giants of the seas in 2017.