Young climate activists from the Fridays for Future movement gathered in Berlin and have called on the incoming government to do more to cut greenhouse gas emissions and to make binding climate protection commitments. 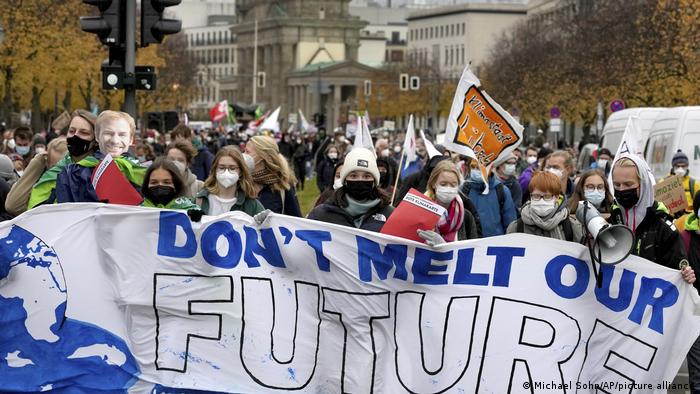 Thousands of climate activists from the global Fridays for Future movement gathered in Berlin on Friday.

Young people traveled from all over the country and gathered at the Brandenburg Gate, chanting and carrying banners.

New German government will have a critical role

Germany's government in the making will play a pivotal role in achieving key objectives when it comes to climate change.

According to DW's Jared Reed, who was at the protest, many activists hope to tighten the screws on the incoming government when it comes to climate protection.

Political parties are busy with coalition negotiations, with a probable future government in the hands of the center-left Social Democrats, the environmentalist Green party and the business-focussed Free Democrats. Politicians from the three parties said they hope to have a government in place by Christmas.

According to preliminary plans, a zero-emissions target has been pegged at 2045 and 2030 has been proposed as the cut-off date in getting rid of coal energy.

However, Future for Friday's leadership wants more from the government. Its leadership said the 2030 exit from coal must be legally binding and called for a halt in the production of vehicles using fossil fuels by 2025.

Fridays for Future demand an end to empty promises

Signs of challenges from the onset

Demonstrators expressed frustration with the Free Democrats having sunk a proposal by the Greens to introduce a nationwide speed limit on Germany's famed autobahns.

"It's something that would hardly cost anything and would make a big difference," said architecture student Larena Dix.

After going to SPD headquarters, where coalition talks are taking place, the protesters returned to rally at the Brandenburg Gate.