Thousands of activists have gathered in Glasgow to demand action to curb the climate crisis. It was but one of many global events planned to coincide with the UN climate conference.

Tens of thousands of protesters marched in the Scottish city of Glasgow on Saturday to demand urgent action for the climate on the sidelines of the UN-organized COP26 climate summit.

Despite rainy and windy conditions, organizers and police said they expected up to 50,000 people to attend. Extinction Rebellion was among the groups that said it would take part, as delegations from nearly 200 countries hammer out a deal to curb carbon dioxide emissions.

"Many thousands of us are marching right across the world today to demand immediate and serious action," Scottish activist Mikaela Loach told the AFP news agency.

While she did not speak at Saturday's march in Glasgow, Swedish climate activist Greta Thunberg wrote on Twitter that the demonstrations around the world sent "a clear signal to people in power at #COP26 to protect people and planet."

A day of global action

Glasgow's protest action was but one of many events happening around the globe. Activists took to the streets in Sydney, Seoul, Nairobi, Istanbul, Copenhagen, Amsterdam, Paris, London and other cities calling for urgent action, especially for communities already devastated by extreme weather incidents.

In Australia, Saturday's global protests for the climate kicked off in Sydney and Melbourne. Some demonstrators wore coal costumes or masks of Prime Minister Scott Morrison.

Protesters called Morrison, a staunch advocate for the mining industry, "an absolute embarrassment" and said the COP26 talks were "a sham." 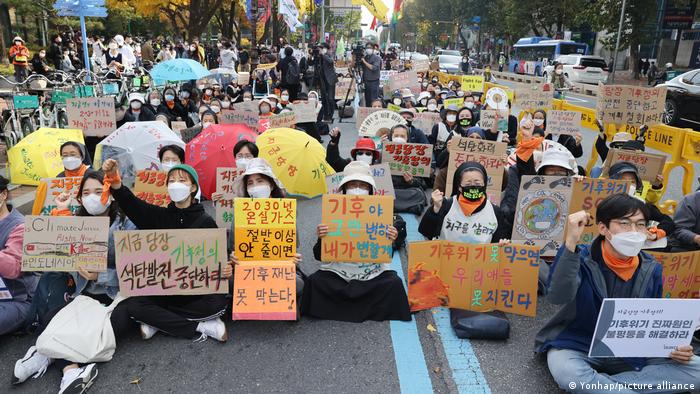 In Seoul, about 500 people occupied an intersection, calling for urgent action on climate change

In Seoul, around 500 protesters hit the streets. Climate Strike, one of the groups organizing the action, said: "At COP26, the expected 'blah, blah, blah' is taking place," echoing the criticisms of Greta Thunberg.

Delegates to the UN conference are in the process of working out a deal to try and meet the Paris Agreement goal of keeping temperature rises globally to between 1.5 and 2 degrees Celsius (3.6 Fahrenheit) above pre-industrial levels. A significant study recently revealed global CO2 emissions will return to pre-pandemic levels this year.

The representatives from nearly 200 countries are at about the midway point in negotiations. Some countries have pledged to reduce greenhouse gas emissions, while deals are also being worked out on reducing the use of coal and methane gases in the atmosphere as well as halting funding for the fossil fuels industry.

Next week will be fraught with shuttle diplomacy as ministers arrive in Glasgow to seal the deal.

Country delegations have yet to elucidate how Paris climate pledges will work in practice. Rules for carbon credits, common reporting schedules and transparency initiatives still need to be worked out.

The UN has said that when countries arrived at COP26 with their national action plans, the result of the combined plans would have meant the Earth would heat up by 2.7 Celsius in the 21st century. So far, the planet has seen 1.1 Celsius of warming, which has already led to extreme weather patterns from fire to drought and resulted in displaced persons and economic refugees.

Activists have so far been underwhelmed by the discussions at COP26. Thunberg, the most famous climate activist, called the conference "a failure" at a youth march in Glasgow on Friday.

However, Michael Mann, the director of Penn State's Earth System Science Center, cautioned critics on Twitter against "declaring it dead on arrival," which he said caused "fossil fuel executives to jump for joy."

"It can't go on like this," Brianna Fruean, a Samoan activist with Pacific Climate Warriors, told AFP. She called on world leaders to hear the demands of protesters.