Clean-up after oil spill off Norway | Environment | All topics from climate change to conservation | DW | 21.02.2011

Clean-up after oil spill off Norway

Authorities in Norway are working to contain a spill from an Icelandic cargo ship. The impact is not as disastrous as initially thought, but icy conditions are making accurate assessments difficult. 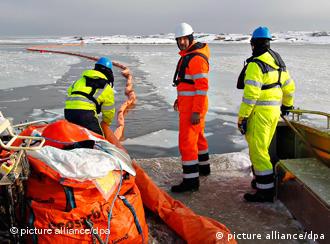 The clean-up has been hindered by icy conditions

A clean-up operation is underway after an Icelandic ship, Godafoss, ran aground late Thursday near the mouth of the Oslo Fjord. The vessel spilled fuel into the Ytre Hvaler marine park, Norway's only marine natural reserve.

The ship was carrying 800 tons of fuel when it struck a rock near the mouth of the Oslo Fjord shortly after departing Fredrikstad for Helsingborg in southern Sweden. An unknown quantity of fuel leaked out from the middle of tanks lining both sides of the ship, each holding 250 tons.

"The leaking has now stopped," Ane Eide Kjaeraas from the Norwegian Coastal Administration (NCA) told Deutsche Welle. "We think that most of the oil that we see in the fjord now leaked out in the moment the ship ran aground."

Shortly after the accident, Norwegian and Swedish authorities brought out anti-pollution vessels, tugboats, surveillance planes and helicopters to assess the situation. Floating barriers were also set up around the ship to limit the damage.

Kjaeraas said the spill was not as serious as first thought. However, the current weather conditions are preventing further assessments and hindering clean-up efforts.

"We have lots of ice in the fjord, which makes it difficult to get the total picture of how much oil there is," said Kjaeraas. "We don't think that all of these 500 tons have leaked out, but we don't know yet." 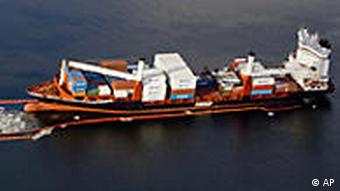 Godafoss was carrying 800 tons of fuel

By Friday afternoon, the oil slick had reached the shoreline in at least two places within the Ytre Hvaler marine park, which is home to a wide variety of sea birds, marine life and large cold-water coral reefs, the Norwegian Coastal Administration (NCA) said in a statement.

According to Kjaeraas, around 200 birds on the west side of the fjord have already been affected. She expects thís number to rise.

Frida Bengtsson, Oceans Campaigner at Greenpeace Norway, emphasized that the extent of the damage greatly depends on the size of the leak - but if wildlife does suffer, the impact could be greater than meets the eye.

"The damage to birds is more visible when oil spills happen," Bengtsson told Deutsche Welle. "But things like coral would also be affected. There are concerns that this spill will impact coral organisms, many of which are spawning at this time."

Birds affected by an oil spill often die without human intervention, but cleaning them is a complicated, time-consuming task. The most serious impact is oil coating their feathers, which interferes with the regulation of their body temperature. Marine mammals such as seals are affected in a similar way.

According to the World Wide Fund for Nature (WWF), more than 6,000 marine species live in the area, including 220 on Norwegian and Swedish lists of endangered species. 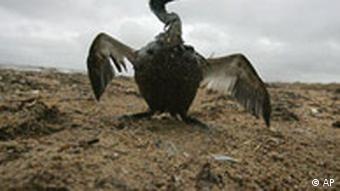 Birds often die after coming into contact with an oil spill

If all 500 tons of fuel did actually leak out of the ship, it would classify as a serious problem, said Kjaeraas. She refers to a similar accident in 2009, in which a drybulk carrier called Full City also ran aground off the Norwegian coast. It leaked 300 tons of fuel, resulting in a clean-up operation that lasted a year.

But this incident also inspires some optimism as far as wildlife is concerned. Although it killed around 2,000 seabirds, Kjaeraas points out that it did not have a permanent effect on their populations.

Regardless of the final outcome, Kjaeraas emphasized that oil and fuel spills in arctic seas pose extra problems due to the climatic conditions.

"There is less experience with oil spills in arctic regions," she said. "The NCA is working with the oil industry to develop technological solutions for equipment that can clean up oil in ice."

Meanwhile, WWF has said in a statement that it "is asking the authorities to ban all maritime traffic in the most vulnerable zones, that oil be banned as fuel and that this influences decisions concerning oil production in fragile regions."

For over a week, a Norwegian oil company has been scrambling to stabilize pressure levels in one of its North Sea oil platforms. Norwegian environmental groups say the company has lost control over the situation. (27.05.2010)