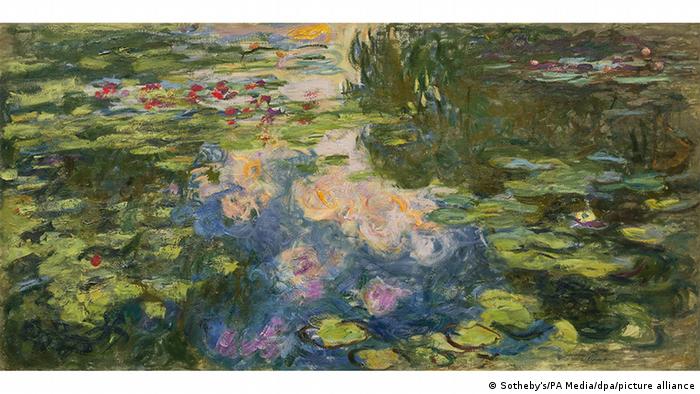 The price is among the top five for works by the artist to be sold at auction — the $110.7 million record was set in 2019 for a painting from Monet's "Haystacks" series. It far outstripped the price for works by Pablo Picasso and Paul Cézanne also sold at the Sotheby's contemporary art auction.

Claude Monet's water lily paintings are among the most beloved works of impressionist art. The renowned painter spent hours in his garden in Giverny, a small village 70 kilometers (50 miles) from Paris, painting the lilies, or nymphéas, that he lovingly cultivated. The garden was his place of inspiration, a cherished retreat during World War I.

Today, the public can visit the French impressionist's ornamental garden, complete with the famous pond where his his water lilies blossomed.

The paintings created here in the last decades of Monet's life are today considered to be among the most monumental works of early 20th-century painting.

When Sotheby's auction house put one of the most celebrated works from the collection, Le Bassin aux Nymphéas, under the hammer on May 12, it sparked a heated bidding war resulting in a price almost doubling expectations. 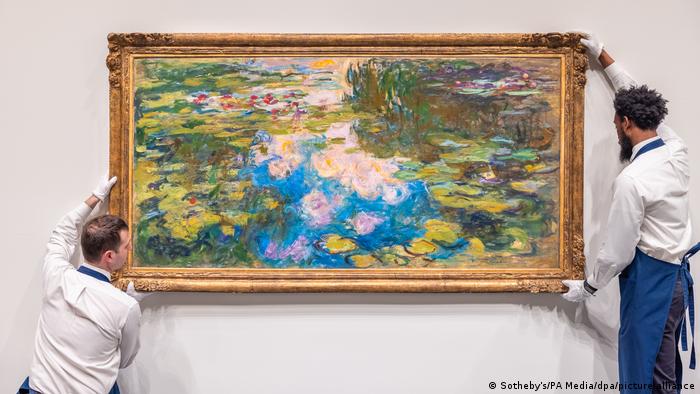 Many of the flowers and trees Monet planted in his garden were exotic specimens that were becoming popular in France at the beginning of the 20th century.

Yet no plant was closer to the painter's heart than water lilies. He is said to have ensured that the pond where they grew was kept clean of other vegetation so that the water could best reflect the light. The painter employed half a dozen gardeners, one of whom was entrusted solely with caring for his precious lilies.

The novelist Marcel Proust suspected that the painter's intention was to achieve an effect "not quite in keeping with nature, because [the garden] was laid out in such a way that only flowers of matching colors would bloom at the same time." He referred to it as a "color garden," or an "art garden."

Monet's obsession with the pond vegetation began in the 1890s and continued until his death in 1926. Sitting alongside the water, he often painted several pictures at once, setting up the easels side by side and working almost as if on an assembly line.

When World War I broke out in 1914, the painter was 74 years old. He chose to spend an entire year in Giverny, at which point he decided to create a multi-panel water lily series. Lotus flowers on the water at Claude Monet's iconic garden in Giverny, France

Painting as a patriotic duty

Monet referred to such works as "great decorations" intended to distract from the suffering caused by the war. The day after the armistice of November 11, 1918, Monet donated two large-scale water lily works to the French state as a symbol of peace

At the urging of French statesman Georges Clemenceau, a close friend, Monet later donated up to eight paintings — but only after he had been promised that they would be displayed in daylight.

When exhibited together, the works measured more than 100 meters (328 feet) side-by-side. It was not until 1927, a few months after the painter's death, that "Water Lilies" found a final home in the Musée de l'Orangerie in the Tuileries Gardens in central Paris. 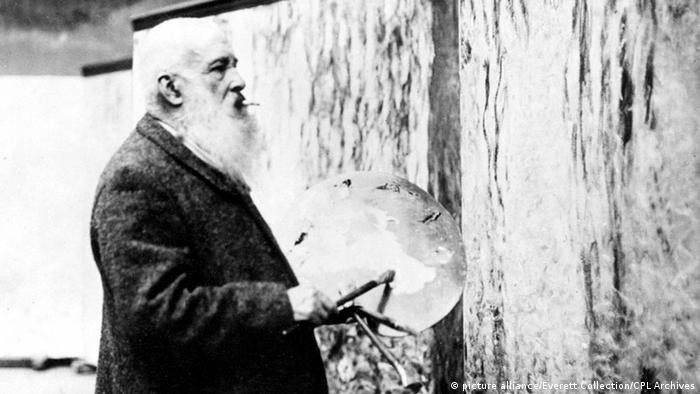 To this day, the Orangerie remains a pilgrimage site for art lovers. Visitors can immerse themselves in Monet's "Water Lilies" cycle, which thanks to its ovular shape, makes visitors appear as if they are surrounded by the pond. The daylight streaming into the space makes the colors dance as the hours pass. The landscape gives the "illusion of an endless whole, of a wave with no horizon and no shore," in the words of Monet.

Through the eyes of the artist

Monet always depicted the garden in his paintings exactly as he saw it. As a result, anyone viewing his masterpieces sees the pond or garden directly through the painter's eyes — complete with the weeping willows reflected in the water, the glistening of the morning sun, and the shadow caused by clouds at sunset.

By the time of his death, Monet had created more than 250 water lily paintings, 40 of which were large format — including 1919 painting Le Bassin aux nymphéas (Water Lily Pond), which Sotheby's auctioned.

Other large-format lily paintings are held in major collections around the world, including at New York's Museum of Modern Art.

This article was translated from the German by Sarah Hucal.

Sotheby's in New York auctioned off a 15th-century masterpiece, the Botticelli painting "Young Man Holding a Roundel," smashing the record price for the artist.