Chinese war blockbuster fuels anger in South Korea | Asia | An in-depth look at news from across the continent | DW | 14.10.2021

"The Battle at Lake Changjin" is set to be the highest grossing film of the year. But critics have slammed it as propaganda designed to whip up nationalism in Chinese audiences. 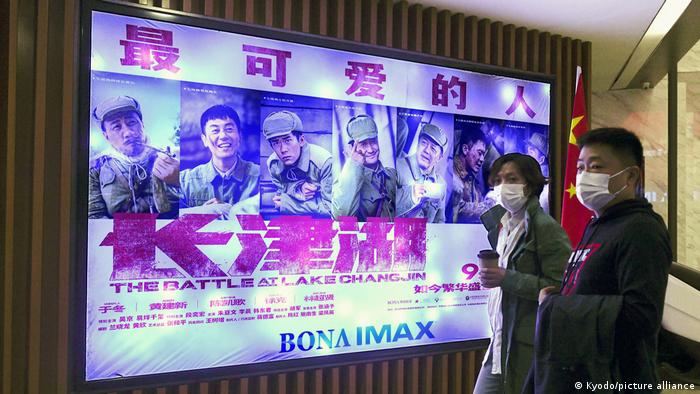 Across China, war epic The Battle at Lake Changjin is filling cinemas and shattering box office records. The film, set on the Korean Peninsula during the bloody 1950-53 Korean War, is on course to be the world's highest grossing movie of 2021.

But the movie has been met with fierce criticism in South Korea, raising the possibility that it may not even find a local distributor.

To many South Koreans, the film is another propaganda piece filled with historical inaccuracies and bankrolled by the Chinese government to incite deeper patriotic feelings among the country's younger generation.

Some critics point out that the movie has been released to coincide with the 100th anniversary of the founding of the Chinese Communist Party.

Others are angry that the Chinese people are being told the nation's "heroic" volunteers brought peace to the peninsula through their self-sacrifice, and insist Beijing is trying to rewrite history.

"China is very powerful economically and they are becoming more aggressive toward their neighbors, and it appears they think that power gives them the right to alter history," said Han Ye-jung, a lawyer in the Seoul office of an international legal firm.

"I think that [South] Korean people are angry and disappointed about this," she told DW.

'Another example of propaganda'

Han said she's not surprised about the latest movie, highlighting that another Chinese-made Korean War movie, The Sacrifice, was due to be released in South Korea in September. Instead, the movie was met with such fierce opposition from veterans and politicians that the local distributor canceled its release.

In a statement, the Korean War Veterans Association described the release of The Sacrifice as "an act of contempt against war veterans and patriots who participated in the Korean War."

"It is an anti-national act that goes against the system of liberal democracy to show to our young people today a propaganda film describing Chinese soldiers as heroes when they were actually part of a war that infiltrated our country," the association said.

According to Han, The Battle at Lake Changjin is another example of propaganda.

The movie depicts China holding off US troops against all odds in one of the pivotal battles of the Korean War. That the fighting broke out when North Korean troops invaded the South is rarely explained in China's accounts.

North Korea started the three-year conflict by invading the South, then Beijing came to Pyongyang's assistance after UN forces had pushed the North Korean military virtually to the Chinese border, Han said.

"If China had not helped the North and attacked the South, then the war would have been over much earlier and hundreds of thousands of people would not have died," she said. "Instead, the fighting went on until 1953, the damage to the South was terrible and we still live on a divided peninsula.

"That is the reality of the Chinese attack on Korea, not what they are portraying in this movie," she said. 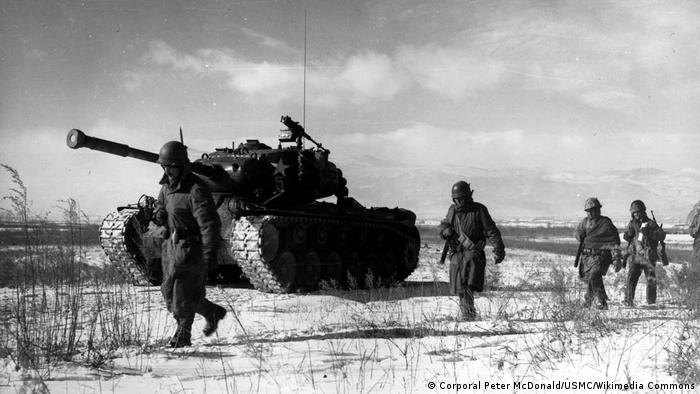 What happened at Lake Changjin?

The film tells the tale, from the Chinese perspective, of one of the bloodiest encounters of the entire conflict.

In December 1950, six months after the initial North Korean attack had forced the South's troops back to the ever-shrinking perimeter around the southern city of Busan, the UN — led primarily by the US military — had advanced beyond the prewar border and was approaching the Chinese frontier.

Some 30,000 US troops had advanced to Lake Changjin — known in the West as Chosin Reservoir — when they were suddenly confronted by eight divisions, or 150,000 fresh Chinese troops.

The US managed to extricate the bulk of their troops by road to the port of Hungnam, from where they were evacuated.

Nearly 18,000 US troops were killed, captured, wounded or listed as missing. On the Chinese side, there were more than 48,000 deaths. Many also lost their lives due to the terrible weather conditions.

'Whitewashing of the truth'

The film comes at a time when Beijing and Washington are at geopolitical, economic and military loggerheads.

Chinese state-run newspaper Global Times has claimed the film has "pushed the patriotic sentiment of people across the country to a peak amid the tense China-US competition."

It also reported that "many residents" in Shenyang in China's northeastern Liaoning province "spontaneously came to mourn the heroes by laying flowers" on the graves of men killed in the conflict.

China's Pacific dominance 'not going to be accepted'

The Global Times cited a retired military officer as saying that he went to watch the film on the day of release, and that he would "dash forward like the old generation," "if the order is given."

Rah Jong-yil, a former South Korean diplomat who was 10 years old when the war broke out, has slammed the film as propaganda "nonsense."

"But it is troubling," Rah said. "The Chinese say they were fighting for North Korea and resist US aggression, but Beijing was acting in its own interests at the time and did not want to see Korea unified and supported by the US on their border.

"They want to change the narrative of what happened before and during the war, which is dangerous as Chinese people have no way of knowing that it is propaganda," said Rah, who has vivid memories of battles raging close to the village from where he had been evacuated for safety.

"We Koreans know that we were attacked and invaded by the North Koreans and then the Chinese," he said. "This is just whitewashing of the truth. But who can stop the Chinese government telling their people these things?"

Washington's alliance building in the Indo-Pacific is increasing pressure on South Korea, which finds itself caught between an economic behemoth and a long-standing security relationship.

As the US and other countries withdraw development staff and aid, China's regional rivals are watching whether Beijing can extend its sphere of influence by building ties with a new Taliban regime in Afghanistan.

South Koreans have leaped to the defense of a dish that has earned a reputation as the nation's "soul food," but which a Chinese newspaper contends is part of China's culinary culture. Julian Ryall reports.