The Chinese president boasted about the role China will play in solving major global crises while preaching the benefits of free trade. He was talking in the aftermath of the signing of the world's biggest trade deal. 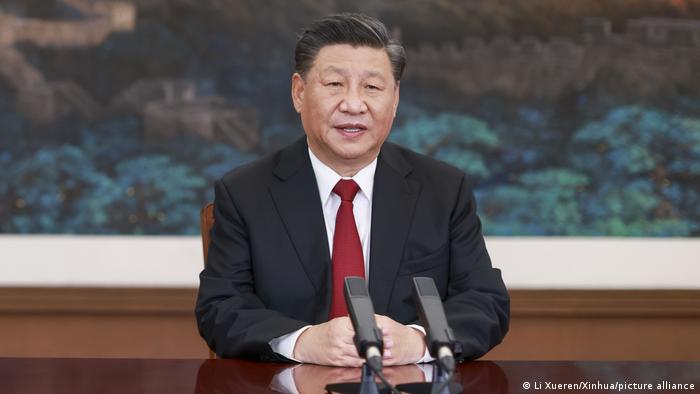 The President of the People's Republic of China, Xi Jinping, promised to keep the country's "super-sized" economy open and railed against protectionism in a speech over video to economic leaders on Thursday.

Following the signing of the world's largest free-trade deal over the weekend and a day before the annual Asia-Pacific Economic Cooperation (APEC) forum, Xi called China the "forerunner in driving global growth," saying it championed free trade policies in a clear rejection of the more hostile and protectionist policies of the Trump administration.

"Openness enables a country to move forward while seclusion holds it back," he said.

Xi also vowed to continue to "reduce tariffs and institutional costs" while signing more free trade pacts with other countries. He considered globalization "irreversible" and called for stronger policy coordination between states.

In preparation for APEC forum

This year's APEC forum is taking place online because of the coronavirus pandemic. It brings together 21 countries from the Pacific Rim, including China and the US. Combined, the participants account for 60% of global GDP.

The APEC meeting comes one week after China and 14 other Asia-Pacific countries signed the world's biggest trade deal — a landmark moment for the People's Republic considering the absence of the US from the so-called Regional Comprehensive Economic Partnership (RCEP).

While the US is part of APEC, it was not clear whether President Donald Trump would take part or leave US representation to another high-ranking official after the fallout of his loss in the presidential election.

Another APEC member, Australia, may be skeptical of China's serenade to free trade considering that the two countries have been involved in a trade spat which has seen disruptions to sales of Australian beef, wine and barley to China.

'The devil is in the details'

"In my view, China is trying to bring globalization into the country,"  Chief Economist at the Mercator Institute for China Studies (MERICS) Max Zenglein told DW. "This should ensure supply chain security, especially in the high-tech sector."

But "the devil is in the details" when it comes to the Communist world power giving more equal treatment to foreign competition.

"It must also be taken into account that the Chinese Communist Party is extending its influence to private companies," he said. "This would also be part of equal treatment, but this could be problematic from a European perspective."

Australia is a good example of how China is not afraid of responding to political differences with economic punishments. "China increasingly sees itself in a position of strength and does not shy away from using it," said Zenglein. "This shows that economic relations with China also have a political price."