Chinese New Year: Entering the Year of the Rat amid the coronavirus crisis | Culture | Arts, music and lifestyle reporting from Germany | DW | 24.01.2020

The coronavirus outbreak is plunging China into chaos, just as the Chinese were set to celebrate their biggest and most important festival of the year, the Lunar New Year.

Travel bans have been imposed on different cities, even though hundreds of millions of people were planning to go back to their families this weekend. According to press agency AFP, more than 40 million people were confined to their city on Friday. Many public holiday celebrations have been cancelled.

The impact is also being felt in the cultural sector. Even though the Chinese New Year is usually the country's most popular moviegoing period of the year, this year, major studios have decided to postpone their releases; China's 70,000 movie theaters will remain closed, as reported by the Hollywood Reporter. Major tourist attractions such as the Forbidden City in Beijing and the Shanghai Disney Resort are also closing their doors.

Disneyland's Mickey and Minnie were all set to celebrate the Year of the Rat with special costumes and performances, but now the world-famous mice will remain isolated, just like a large part of China's population affected by the exceptional quarantine.

Read more: Why are huge museums in China virtually empty?

How the traditional Chinese calendar works

Nevertheless, Chinese New Year heralds the beginning of spring and a new lunisolar cycle. Although the Gregorian calendar is used for civic purposes, the Chinese lunisolar calendar determines festivals.

The Chinese calendar was conceived nearly 4,000 years ago. Based on a lunisolar calculation, the version used today was perfected around 500 BC. While the Gregorian calendar is set for the year 2020, according to the Chinese lunar calendar, the year 4718 will start on January 25.

The calculation of a Chinese calendar is long and complex, based on the dates of the new moons and the dates when the sun's longitude is in multiples of 30 degrees.

The naming of the Chinese calendar, however, follows another system. Unlike the Gregorian calendar where each month has a name that repeats every 12 months, the months in a Chinese calendar are numbered.

After the Earth Pig, the Metal Rat

Only the years are named. Each year refers to one of five elements — water, earth, fire, metal and wood — and one of the 12 Chinese zodiac animals, a cycle repeated every 60 years.

Since the five elements and the animals each have their own significance, the name of the year comes with symbolic attributes that are believed to define the year to come.

Following the Year of the Earth Pig in 2019, the year of the Metal Rat, which officially begins on January 25, 2020, is seen as a year of ambition. People with the zodiac sign Rat are said to be hardworking, resourceful and clever. 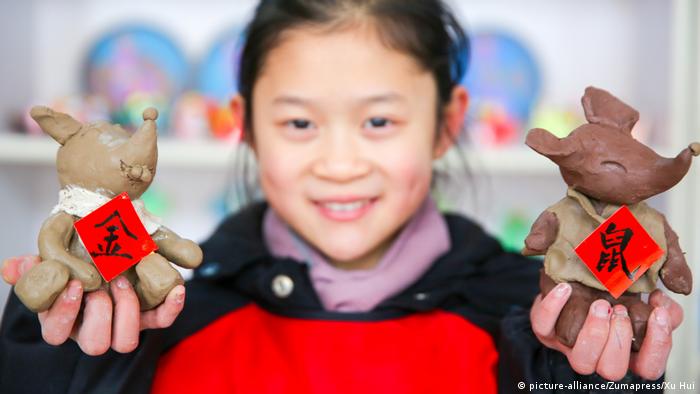 Children welcome the Year of the Rat with artworks

Spring festival also has its equivalent in various other Asian countries: Tet in Vietnam, Seollal in South Korea, Tsagaan Sar in Mongolia and Losar in Tibet.

"Chunyun" translates to "spring transit." For the year 2019 alone, about 3 billion trips were undertaken by Chinese citizens back to their hometowns within China, which is why this year's travel ban is so dramatic.

Travel patterns are typically related to income levels, with the more affluent groups choosing to travel out of China. According to C.Trip, China's biggest online travel agency, only 5% of Chinese citizens own a passport, but about 7 million travelers went abroad during Spring Festival 2019, most of them going to Thailand, Japan and Indonesia.

Chinese nationals living abroad with family in China often travel back home. Most of the Chinese diaspora, however, pay homage to their Chinese heritage by celebrating in the places where their families have settled.

In city centers within China, businesses close for up to a week for the Chunyun period. 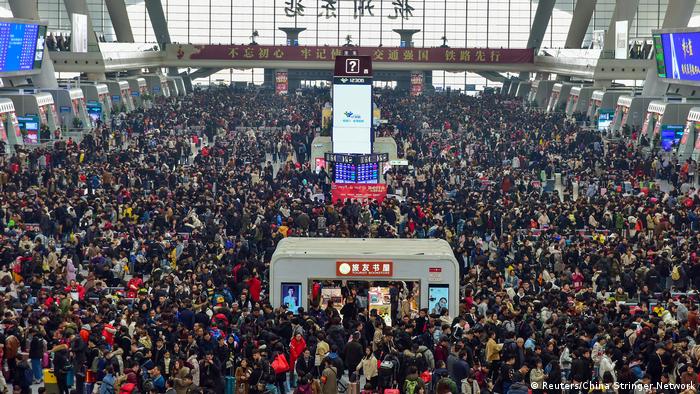 Chinese New Year's eve is considered the most important day of the 15-day traditional festival. Families and relatives usher in the new year with celebrations going on late into the night. They gather for a traditional Chinese dinner and remind themselves of what's important in life: community, tradition and food.

While regional differences mainly apply to food, certain customs remain consistent around the world. For example, the color red is the most important color for the festival and most homes will be adorned with red decorations.

The picture gallery below looks into more rituals of Chinese New Year, which will, unfortunately, be disrupted for many people this year by the deadly coronavirus crisis.

A personal look at some central differences between China and Germany

Comparing China and Germany is like comparing apples with oranges, says Megan Chua from Singapore. After living in both countries, she talks about some striking differences between the two nations. (18.09.2019)

How China is still impacted by its Cultural Revolution

Cutthroat competition on the open market is just like the class struggle of the Cultural Revolution, says Chinese artist Wang Qingsong. His critical work is now on show in Berlin. (22.08.2017)

Following the so-called Cultural Revolution, Chinese artists started exploring new forms of expression. Oftentimes they would run into considerable obstacles and challenges they had to work around or overcome altogether. (02.06.2019)

Residents of Beijing have been panic buying food with heightened fears of a Shanghai-style lockdown. Germany's vaccine council has been asked to look into a second booster ahead of autumn. DW has the latest.