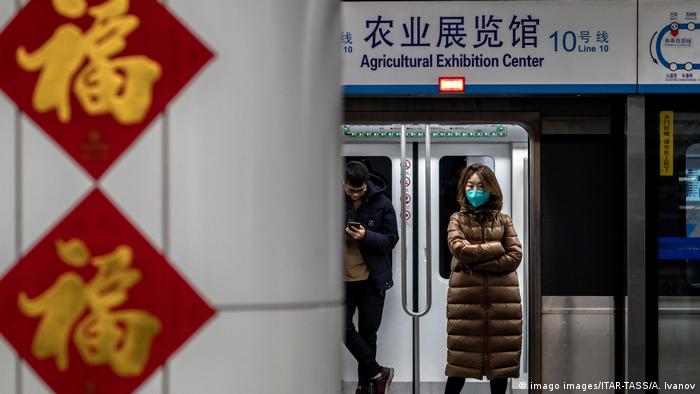 Beijing has canceled mass Lunar New Year celebrations and put four cities on lockdown in an effort to control the spread of the deadly coronavirus virus, state media reported Thursday.

The "large-scale events" to mark the new year include traditional temple fairs that have attracted mass crowds of tourists in recent years.

China's health officials said the virus can be passed onto others by respiratory transmission. At least 17 people have died from it in less than a month. On Thursday, China's Hubei province announced the first death outside the outbreak's epicenter.

The Geneva-based World Health Organization (WHO) decided against declaring the outbreak a global public health emergency.

"Make no mistake, this is an emergency in China," said the WHO in a statement. "But it has not yet become a global health emergency."

On China's Weibo messaging service, state-run newspaper Beijing Evening News said the city government is canceling the events "to strengthen prevention and support" as hundreds of millions of people are planning to travel for the Chinese New Year holidays this weekend.

The Beijing government added that they would provide more information "as the epidemic situation evolves."

China on Thursday locked down Wuhan and three other cities that are, in total, home to more than 18 million people.

Authorities in the major port city of Wuhan — where the new coronavirus first appeared — in central Hubei province told residents not to leave the city "without a special reason."

Trains and planes leaving from Wuhan were indefinitely suspended and tollways on roads leading out the city were closed, causing panic.

"We are feeling as though it is the end of the world," said one Wuhan resident on China's Weibo social platform, expressing concerns about possible food shortages.

Neighboring Huanggang and the city of Ezhou have also had a number of services shut down.

Beijing will close the city's iconic Forbidden City on Saturday until further notice, the palace museum announced Thursday. The museum said on its official Weibo account that the decision was made "in order to avoid cross-infection caused by the gathering of people."

Across the capital, people wore face masks that are usually donned as a barrier against air pollution to protect themselves against infection.

One passenger at Beijing international airport traveling for the Lunar New Year said she felt uneasy about boarding a plane, but wouldn't cancel her travel plans. She told DW that the coronavirus reminds her of the 2002 SARS epidemic, which killed hundreds of people.

"SARS broke out far away in southern China," she said. "But it wasn't long until the danger reached Beijing. The entire city was cut off; nobody came in or out."

More than 570 people have been infected with the pneumonia-causing virus across China, with most cases found in Wuhan. The first case of the new virus was detected on December 31 last year, and cases of the virus have since been confirmed in Vietnam, Japan, Hong Kong, Macau, South Korea, Taiwan, Thailand and the US.

India's Foreign Ministry had earlier claimed that an Indian national was infected. However, the Saudi Center for Disease Prevention and Control denied the claim, saying: "No cases of the novel coronavirus in Saudi Arabia so far."

The 17 people who died in China were aged between 48 and 89 and had pre-existing health conditions, Chinese health authorities said Thursday.

The virus is believed to have emerged from a seafood market that illegally sold wild animals.

WHO says 'too early' to declare Chinese coronavirus a global emergency

An expert panel determined that the situation was very serious in China — but not globally. However, WHO chief Tedros Ghebreyesus said the panel's opinion was divided. (23.01.2020)