Amid heightened tensions over territorial disputes in the South China Sea, Chinese President Xi Jinping will embark on his first state visit to Vietnam in a bid to mend strained relations between the communist nations. 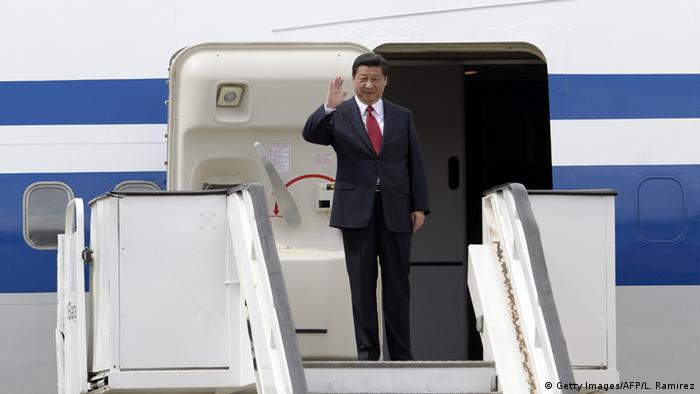 During the two-day visit, the neighboring countries are expected to sign a host of agreements on areas such as party-to-party cooperation, culture education, infrastructure projects, economy, trade and investment, according to China's state-run news agency Xinhua.

China is Vietnam's largest trade partner, with bilateral trade reaching $83.6 billion last year - of which Chinese exports to Vietnam comprised more than $50 billion. This year, Sino-Vietnamese trade is estimated to reach $90 billion, increasing to $100 billion in 2016, according to Chinese media.

Speaking to Xinhua, Li Jun, a senior official of the International Department of the CPC Central Committee, said Xi's Vietnam trip comes at a new stage of bilateral ties, as the two sides have agreed to work together to link China's Belt and Road Initiative and Vietnam's "Two Corridors and One Economic Circle" plan.

"Xi's upcoming trip will […] advance the development of the China-Vietnam comprehensive strategic cooperative partnership," Li was quoted as saying. 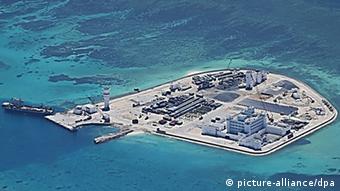 But the Chinese leader will also want to use the visit to defuse heightened tensions over territorial disputes in the South China Sea (SCS), as Hanoi has repeatedly accused Beijing of carrying out illegal land reclamation projects in the area and of violating its territorial sovereignty.

China claims most of the potentially energy-rich waterway, through which $5 trillion in ship-borne trade passes every year, arguing that it is asserting its so-called "historic rights" to maritime resources in the area.

"There are territorial disputes over the Paracels and the Spratly Islands. Moreover, the southern part of the Gulf of Tonkin still has not been demarcated, and Chinese vessels routinely harass Vietnamese or foreign investors' seismic research vessels or fishermen," Zachary Abuza, a Southeast Asia security expert and professor at the Washington-based National War College, told DW.

Last year, Beijing's deployment of a massive oil rig, in what Vietnam calls its exclusive economic zone and on its continental shelf, escalated tensions in the region, sparking violent anti-Chinese protests and the worst breakdown in relations since the brief border war in 1979. 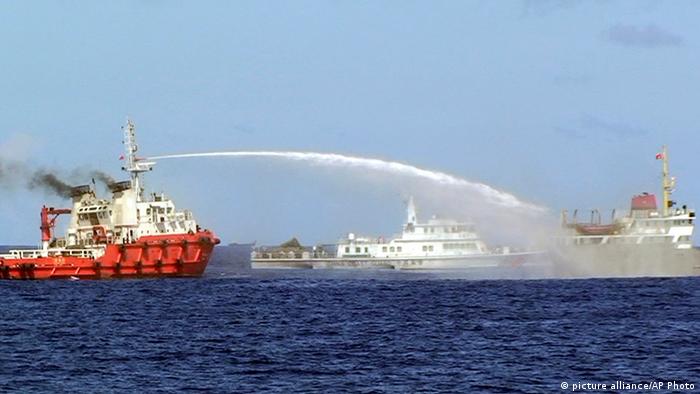 'A lot of pressure'

Besides Vietnam, the Philippines, Malaysia, Brunei and Taiwan also have overlapping claims in the area. And the speed of Chinese expansion in the SCS has also alarmed the United States which recently sent a warship inside the 12-nautical-mile limit of one of the Chinese-made artificial islands in a bid to "assert freedom of navigation" in what Washington views as international waters.

The Chinese condemned the move as "illegal" and a threat to their country's sovereignty.

"On the surface, China will be calling for a peaceful resolution of territorial disputes - without giving up anything - and for Vietnam to support China's economic agenda. There will also be talks of fraternal socialist ties and party-party relations," said Abuza, referring to Xi's upcoming visit. 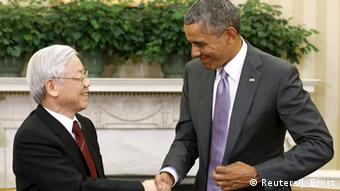 The general secretary of the Communist Party of Vietnam (CPV), Nguyen Phu Trong, visited US last year in a bid to bolster bilateral ties

But behind the scenes, there will be a lot of pressure on Vietnam, which Beijing views as being proactively anti-Chinese in its foreign policy, the analyst argues. "China is unhappy at the closeness of Vietnam's relationship with the United States, including the unprecedented visit of the CPV General Secretary to Washington last July," said Abuza.

In fact, experts point out that while the two Communist parties still maintain close ties, China's land reclamation and militarization of features in the SCS has strained relations over the past year.

"A number of senior Vietnamese officials and intellectuals are increasingly wary of China's actions and ambitions; and signing on to the recently-concluded US-led Trans-Pacific Partnership (TPP) trade agreement was but one strategic option pursued by Hanoi to gradually move away from China's orbit, so to speak," Phuong Nguyen, a Vietnam expert at the Center for Strategic & International Studies, told DW.

As a result of the dispute, public opinion in Vietnam toward China has turned extremely negative, in stark contrast to popular sentiment felt toward the United States, a former battlefield foe, analyst Nguyen indicated.

Added to this is the consideration that Xi's visit comes ahead of Vietnam's 12th Party Congress in early 2016. Beijing is therefore concerned that a number of pro-Western individuals who have been vociferous in their criticism of China will assume top leadership positions. "My guess is that Xi will make China's position on these individuals very clear," said Abuza.

A chance for 'course correction'

The upcoming trip will be just as important to China as it will be to Vietnam as it might help define where the bilateral relationship is headed.

"It is crucial for President Xi to avoid pushing Vietnam into the arms of Japan and the US. Xi will therefore offer comprehensive economic incentives to Vietnam, Moritz Rudolf, a China expert and research associate at Germany-based Mercator Institute for China Studies (MERICS), told DW.

For Hanoi, the visit could be viewed as a strong symbol that despite advances in relations with Washington, it still maintains an independent foreign policy and strives to strike a balance in its engagement with the world's two superpowers.

For Beijing, which seems to have underestimated Hanoi's strategic resolve, the visit can be a "course correction" to help it patch up its often bittersweet relationship with Vietnam, as CSIS expert Ngyuen pointed out. Beijing also needs good relations with Vietnam to bolster its relations with the Association of Southeast Asia Nations (ASEAN) and make Maritime Silk Road project a success.

Analyst Nguyen is convinced, however, that irrespective of any reassurances offered by Xi, Beijing will most likely move on to expand its encroachment in the strategic SCS and that Hanoi will, in turn, continue to defend its own regional interests.

Support swells behind US challenge to South China Sea claim

Allies have rallied behind the US for its recent navigation into international waters claimed by China. The sail-by raises tensions between the two sides, with China promising to "resolutely respond" to provocation. (27.10.2015)

A US naval delegation has paid an official visit to Beijing's lone aircraft carrier, Chinese media sources say. The move comes as tension ratchets up between the two regional powers. (21.10.2015)

Pacific allies the United States and Australia have issued a warning to China, saying they remain committed to freedom of navigation. That includes in the disputed South China Sea where China has built islands. (14.10.2015)

Beijing has announced that construction of two new lighthouses has been completed on a contested island chain in the South China Sea. The government has already announced plans to build more. (10.10.2015)

"By improving its own maritime domain awareness and maritime defense capabilities of its Navy, Air Force, and Coast Guard, Hanoi can make Beijing think twice about its aggressive streak toward smaller Southeast Asian neighbors, something other claimant states such as the Philippines or Malaysia can't or won't do. And the United States has begun to more actively support Vietnam in this pursuit," said Nguyen.

But the Vietnamese are not just banking on US support, as experts point to Hanoi's "omnidirectional" foreign policy. "The Vietnamese seek good ties with the US, Japan, ASEAN, India, Australia, and Russia, as well as China. The problem is that the Chinese have a very zero-sum view of the world, and they see Hanoi's improved relations with Washington, New Delhi, Tokyo and Canberra, as part of an effort to 'contain' China, which expects deference from Vietnam," said analyst Abuza.

For instance, he pointed out that China is very worried that Vietnam - which has also tried to galvanize ASEAN consensus against Chinese assertiveness in the SCS - is opening up the strategic port of Cam Ranh Bay, though on a "commercial basis" and to no one's exclusion.

"Clearly the US seeks to benefit from this, and this week the Japanese Minister of Defense is in Hanoi and will likely negotiate access to it for the Japanese Self-Defense Forces, thus probably angering Beijing," said the Southeast Asia expert.

Given these developments, experts say that beyond trade and investment agreements, Xi's visit will likely be short on tangible results, especially regarding the territorial disputes. "There may be a statement in principle to finish the demarcation of the Gulf of Tonkin and a joint blueprint for the development of long-term bilateral ties, but I am not predicting any meaningful breakthroughs," said Abuza.

Analyst Nguyen has a similar view: "The level of mistrust and disillusion brought about by China's actions will not go away in Hanoi and among the Vietnamese public just because of Xi Jinping's two-day visit."

Nevertheless, given the frequent high-level contacts, as well as deep historical and political ties between the two countries, MERICS analyst Rudolf believes an escalation of the dispute seems unlikely at this point.