Chinese state banks lend money to poorer countries at terms that may affect foreign policy, a new study has concluded. Financial stress brought on by the pandemic has made these deals a matter of global concern. 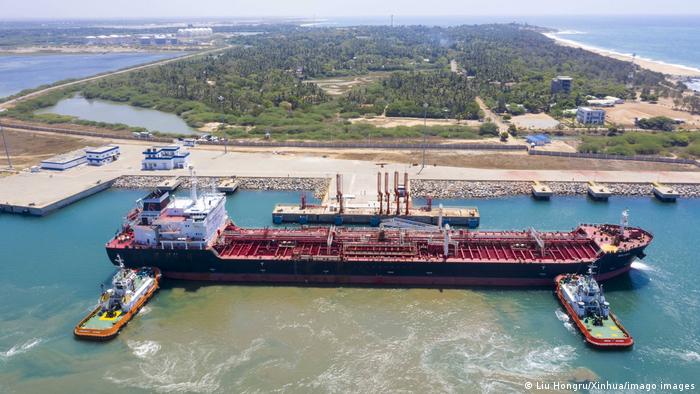 China, the world's largest public lender to developing countries, imposes unique conditions on borrowing nations which could be giving Beijing undue influence over their economic and foreign policies, according to a study from Germany's Kiel Institute for the World Economy (IfW) released Wednesday.

The study analyzes 100 Chinese loan agreements with 24 countries, the first systematic analysis of the legal terms of China's foreign lending, the report's authors write. Carried out with support from several US research institutions, it compares agreements made with Chinese state-owned banks against 142 publicly available contracts of other major creditor countries.

The contracts in question "use creative design to manage credit risk and overcome enforcement hurdles," the report's authors conclude, revealing China to be a "muscular and commercially savvy lender to the developing world."

Much of the lending has been in the context of China's Belt and Road Initiative, an ambitious global infrastructure investment strategy involving over 60 countries.

"Such terms can amplify the lender's influence over the debtor's economic and foreign policies," the report said. It goes on to list several examples.

Over 90% of the reviewed Chinese contracts include a clause that allows the creditor to terminate the contract and demand repayment in the case of significant law or policy change in the borrowing country. While policy change clauses are standard in commercial contracts, the researchers argue that this takes on a different dimension when the lender is a state entity and not a private firm subject to standard financial regulation.

"Many of the contracts contain or refer to borrowers' promises not to disclose their terms — or, in some cases, even the fact of the contract's existence," write the authors, who obtained access to these documents only through a multi-year data collection initiative carried out by AidData, a research lab at the College of William and Mary in Virginia, United States.

This secrecy prevents other lenders from reliably assessing a country's creditworthiness. "Most importantly," the authors write, "citizens in lending and borrowing countries alike cannot hold their governments accountable for secret debts."

A privileged position for China

The contracts also give Chinese state banks priority over other creditors. At the same time, many of the agreements give China "great leeway to cancel loans or accelerate repayment if it disagrees with a borrower's policies."

The severance of diplomatic relations with China is also classified as a default and breach of contract. Policy changes in the recipient country can also trigger a breach of contract, requiring the debtor government to repay the entire loan amount immediately.

In a normal case, the lender would choose to accelerate principal and interest repayments, rather than demand the loan be returned in full.

"Default triggers of the sort we have identified in Chinese debt contracts potentially amplify China's economic and political influence over a sovereign borrower," the report says.

Researchers also found that 30% of the contracts require loan-receiving countries to deposit collateral in special escrow accounts, often held by a Chinese state-owned bank. Borrowing countries may also be required to deposit the revenue from projects backed financially by these banks into said accounts. In the event of bankruptcy, the Chinese bank could then seize these assets. Only 7% of OECD bilateral creditors and 1% of the multilateral creditors in the benchmark set had similar stipulations, the report says.

We'll always have Paris —  or will we?

The majority of the contracts also hinder borrowers from accessing standard debt restructuring mechanisms. Nearly three-quarters of the contracts contain an explicit "No Paris Club clause." The Paris Club is an informal body of donor countries that convenes if a country has trouble paying its debts in order to look for a way to cancel or restructure it. In such contracts, however, China explicitly obliges borrowers to exclude Chinese lenders from collective restructuring initiatives.

Such a provision conflicts with an agreement reached in November 2020 by China and other G20 countries not belonging to the Paris Club, which laid out roughly the same terms for restructuring the debt of the poorest sovereign borrowers.

These opaque lending practices have taken on a greater significance now that the global health crisis brought on by COVID-19 has increased the risk of financial distress in countries heavily indebted to Chinese lenders. "In light of the high stakes, the terms and conditions of China's debt contracts have become a matter of global public interest," the report says.

Not everyone agrees, however, with this characterization of China as an aggressive lending shark.

"The notion of 'debt-trap diplomacy' casts China as a conniving creditor and countries such as Sri Lanka as its credulous victims," wrote Deborah Bräutigam, professor of international political economy at the School of Advanced International Studies at Johns Hopkins University, and Meg Rithmire, associate professor at Harvard Business School, in an article for The Atlantic. The professors make their case citing an example in which Sri Lanka borrowed money from Chinese banks to fund investments in an ill-fated port. China's questionable lending practices can be chalked up to growing pains, they argue.

"China's march outward, like its domestic development, is probing and experimental, a learning process marked by frequent adjustment," they wrote.

The authors of the latest study, too, stress that, in many ways, the terms and conditions of loans from Chinese state lenders represent a difference in degree, rather than kind, from those of commercial and other official bilateral lenders. All creditors, whether commercial banks, hedge funds, or otherwise, will use "any legal, economic, and political means available to them," to increase the likelihood that they will be repaid, the authors say.

China's contracts differ, however, in their use of unique provisions that, while perhaps standard in the context of commercial debt, take on a greater significance when it comes to lending between governments.