China′s economy: What next for the Asian powerhouse? | Business | Economy and finance news from a German perspective | DW | 26.11.2021

China's economy: What next for the Asian powerhouse?

China's post-COVID recovery has been hurt by Beijing's crackdown on real estate and tech giants. Strong exports have, until now, saved the economy but what happens when global demand for Chinese goods slows? 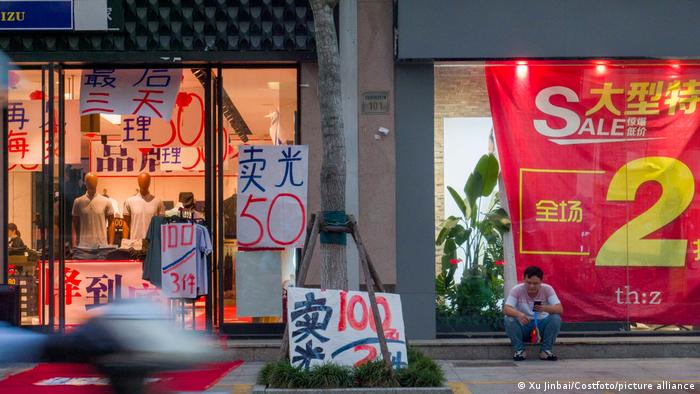 Despite projections of 8% economic growth this year, China is struggling to bat away many economic challenges of its own making. The debt woes of the country's biggest property developers — led by China Evergrande, which owes more than $300 billion (€266 billion) — are threatening to crash the property market. New home sales are down by a fifth.

Beijing has also moved to rein in many of China's technology giants, sparking a sell-off in the shares of online shopping behemoth Alibaba and video game maker Tencent, among others. On Friday, Tencent was ordered to suspend the rollout of new apps as part of further curbs on its expansion plans.

Last month, Chinese regulators took aim at the regional banking sector, amid concerns that business tycoons and local government officials have built up too close ties with some of the country's small- and medium-sized lenders. According to The Economist magazine, these banks make up about a third of China's commercial banking sector, with $14 trillion (€12.3 billion) in assets.

China's incredible manufacturing apparatus has, however, come to the country's rescue, helping to prop up the economy. In October, the Asian powerhouse posted a record monthly trade surplus, as exports surged despite global supply chain disruptions. Exports rose 27.1% last month from a year earlier to $300.2 billion.

While Beijing has moved to calm fears over its measures to cool the property market and restrain banks and tech firms, some analysts are surprised that demand for Chinese goods in the West has remained robust for so long, post-lockdown. At some point, they argue, the United States and Europe will see domestic services growth, including tourism and hospitality, overtake demand for imported goods. And where will that leave China?

"China has benefited from extremely strong global demand, while domestically, the weak spot is consumption. It never really recovered [from the pandemic], compared to investment or manufacturing," Max Zenglein, chief economist at the Berlin-based Mercator Institute for China Studies (MERICS), told DW.

A rebound in consumer spending has been stymied by further COVID-19 outbreaks, long after the virus first emerged in Wuhan in late 2019. A hard-line elimination policy has, at times, placed districts and entire cities into lockdown. The curbs hurt retail sales, which failed to reach a forecast 7% year-on-year rise in August, rebounding just 2.5%.

The Winter Olympics, taking place in Beijing and neighboring Hebei province in February, would usually be a major boost to any economy. But entry restrictions will likely keep foreign sporting fans away, while any large-scale domestic travel could fuel more coronavirus outbreaks, and further dampen consumer spending.

The strong export momentum is expected to prop up growth for several more months, according to projections by Bloomberg Economics. But falling demand from the West remains a major risk to the world's second-largest economy, Zenglein said, which would leave Beijing in a "tricky spot." China's leaders would then be "under pressure to unleash a stimulus which might be contradictory to their attempts to reduce financial risks."

China has vowed to stop flooding the economy with huge amounts of monetary and fiscal stimulus to boost growth. Instead, Beijing plans smaller, targeted stimulus measures toward domestic consumption, including help for small- and medium-sized businesses.

The new approach is a way to achieve President Xi Jinping's vision of "common prosperity," to address income and wealth inequalities that have grown worse over the last decade.

China's leadership has, for years, claimed that domestic consumption is an economic priority but manufacturing for export has continued to dominate. The Communist Party's Politburo Standing Committee has put forward a strategy for a "dual circulation" economy, where domestic demand is stimulated, while dependence on foreign markets is reduced. Zenglein said the idea remains a "theoretical concept, not a policy."

"China's economic policy runs counter to boosting domestic consumption. In order to boost consumption, you need to make fundamental, institutional changes and restructure the economy," he said. "Domestic consumption remains China's weak spot and I see no indication of any change in the short term."

In a recent opinion piece for Project Syndicate, US economist Stephen S. Roach warned against Beijing's "redistribution plus re-regulation" plan, which he said "strikes at the heart of the market-based" reforms that "have underpinned China's growth miracle" since the 1980s. Roach said the increase in state control may be a "dangerous miscalculation."

Zenglein backed up those comments, noting that "strengthening consumption means the retreat of the state, but we're seeing the complete opposite."

A report last month by the US think tank the Atlantic Council and consultancy Rhodium Group called on Beijing to allow the private sector to play a bigger role in the economy and boost cross-border investments to maintain its economic edge.

"Without a market-oriented shift, China will struggle to maintain a growth potential that exceeds 3% annually by the middle of this decade," the report said.

A hint that that Beijing is preparing a new stimulus came this week when the country's central bank deleted several phrases in its latest monetary policy report.

They included a reference to sticking with "normal monetary policy" and another, detailing how it would not engage in large-scale, flood-like stimulus.