Troubles in the property sector, an energy crisis and shortages due to the coronavirus pandemic have contributed to weakened growth in the world's second-largest economy. 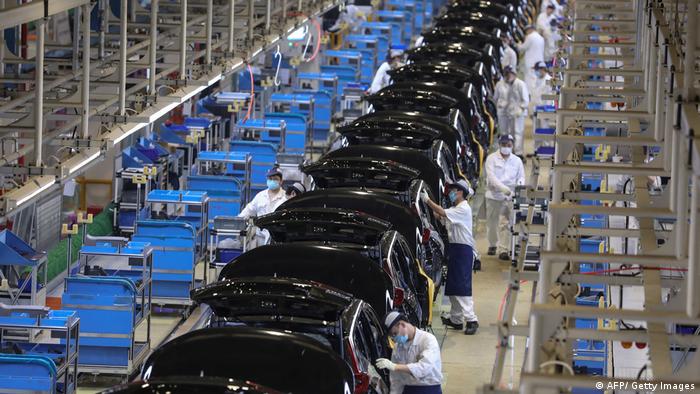 China's GDP grew by 4.9% in the third quarter of the year, down from earlier highs

China, the world's second-biggest economy, saw its economy grow by just under 5% in the third quarter of the year, official data revealed on Friday.

The figure represents a slowdown in China's recovery from the coronavirus pandemic, following higher rates of growth in the first and second quarters.

A spokesperson for the National Bureau of Statistics (NBS), which published the data, pointed to the "current international environment uncertainties are mounting and the domestic economic recovery is still unstable and uneven."

The nominally communist country has been struggling with energy shortages and a slowdown in the real estate market, exacerbated by the massive debt owed by property giant Evergrande.

Why is China's economic growth slowing?

The country's recorded GDP growth for the first quarter of the year hit a record 18.3%. This fell to 7.9% for the second quarter and now 4.9% for the third, leaving growth for the period between January and September at 9.8%.

The initial rebound has been dampened by a series of factors. Fears over the property sector are central, but government crackdowns on tech companies, continued regional lockdowns and the goal of "zero covid" as well as electricity shortages have all played key roles.

Domestic retail sales were up 4.4%, an increase over the same period last year, as restrictions have been eased.

Beijing is trying to make its economy more sustainable, with a greater focus on domestic consumption over exports, and with a tightening of financial risks.

It also put limits on energy use, forcing some factories to close their doors in September to avoid exceeding energy use goals.

Ripple effects to the rest of the world "could be significant" due to weaker Chinese demand for raw materials, Fidelity International investment firm said in a report.

"Even developed markets, including the US, would not be immune to a significant tightening in global financial conditions as a result of a negative China growth shock accompanied by financial stress,'' it added.

A slowdown in manufacturing has led to warnings that some goods may not be delivered on time, raising the possibility of shortages of key consumer goods ahead of the Christmas shopping season.

While there are expectations that Beijing may loosen restrictions on borrowing to release more liquid cash into the economy, Louis Kuijs of Oxford Economics warned that "growth will slow further."