China has announced sanctions on 28 US officials, including former Secretary of State Mike Pompeo. A US National Security spokeswoman described the decision as "unproductive and cynical." 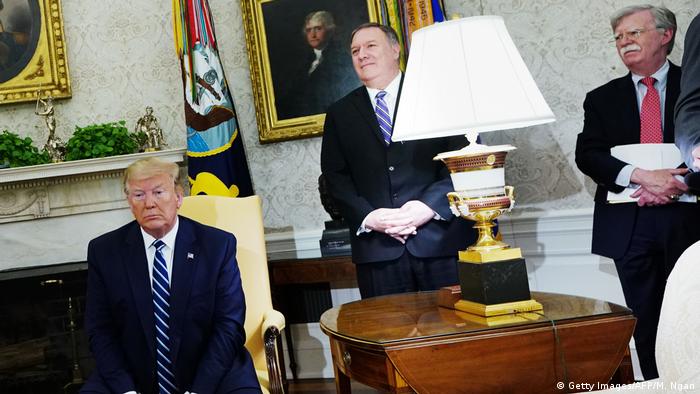 China on Wednesday announced sanctions against 28 US officials affiliated to former President Donald Trump, including former Secretary of State Mike Pompeo, according to a Foreign Ministry statement.

China imposed the sanctions in response to US officials who "interfered in China's internal affairs, undermined China's interests, offended the Chinese people, and seriously disrupted China-US relations," the statement read.

Pompeo had said earlier that China's actions against Uighurs and Muslim minorities in the Xinjiang region, in northwestern China, were a "genocide" and a "crime against humanity."

Chinese Foreign Ministry spokeswoman Hua Chunying said in a media briefing: "Pompeo has made so many lies in recent years, and this is just another bold-faced lie."

"This US politician is notorious for lying and cheating, is making himself a laughing stock and a clown," Chunying added.

China has repeatedly denied human rights violations in the Xinjiang region, despite extensive evidence from the United Nations that almost a million Uighurs and other Muslims have been detained in camps.

What are the sanctions?

The sanctions bar 28 US officials and their immediate family members from entering Chinese territory and conducting business with Chinese institutions.

Bolton, who has been a critic of Trump since he left office in 2019, said on Twitter that he "accepted this prestigious recognition," in response to China's sanctions.

The Chinese Foreign Ministry hoped that "the new administration will work together with China in the spirit of mutual respect, properly handle differences and conduct more win-win cooperation in more sectors."

"We hope the new US administration can have their own reasonable and cool-minded judgment on Xinjiang issues, among other issues," Chunying told reporters.

But a spokeswoman for the US President Joe Biden's National Security Council described China's sanctions as "unproductive and cynical," according to Reuters.

Biden's appointee for secretary of state, Antony Blinken, had agreed with Pompeo's statements. Biden also signaled a similar stance to his predecessor on China.

What will Biden do on trade with China?

What will Biden do on trade with China?

Before Trump's era, the US had already imposed sanctions on China over human rights violations in Hong Kong and Taiwan. The two countries' relations witnessed more tensions during Trump's presidency.

A US congressional commission said that China may have committed genocide in its Xinjiang region. Its report is the latest indictment of Beijing's treatment of Uigurs and other minorities.