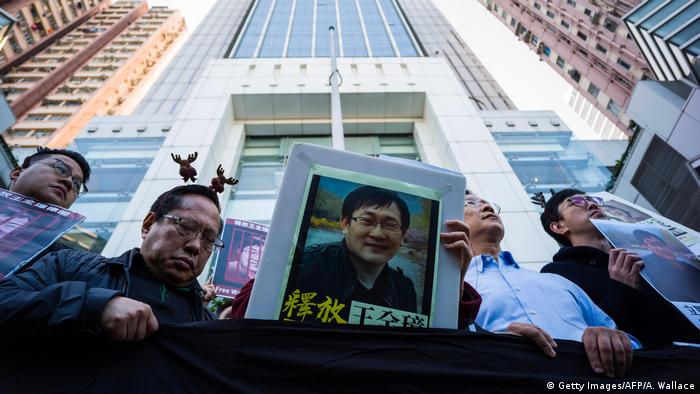 Li Wenzu, Wang's wife, tweeted that she had received confirmation from him during phone call earlier in the day. She accompanied the Chinese-language tweet with pictures of her, Wang and their child.

Wang said that although he had been released, authorities were moving him to his former residence in the eastern city of Jinan for two weeks as a precautionary measure against the novel coronavirus, according to Li.

"I think (authorities) have been lying to us step by step," said Li told Agence France-Presse. "They used the pretext of the epidemic as an excuse to quarantine him for 14 days when he should have been able to return to his home in Beijing according to the relevant legal guidelines."

Wang regularly represented renowned political activists, victims of land seizures and artists, including Ai Weiwei. In August 2015, he was arrested and held incommunicado until receiving a prison sentence during a closed-door trial last year.

He was one of more than 300 lawyers and activists who were arrested during the sweeping "709" crackdown launched on July 9, 2015.

Li, who long fought for her husband's freedom, said she isn't confident that he will be allowed to reunite with his family.

"I am really worried they plan on putting him under longterm house arrest and will prevent us from being reunited as a family," she said.

Earlier this week, several human rights organizations — including Human Rights Watch — called on Beijing "to refrain from putting him under any form of house arrest, surveillance or any other form of control over his personal freedom."

ls/rc (dpa, AFP)Every evening, DW's editors send out a selection of the day's hard news and quality feature journalism. You can sign up to receive it directly here.

A court in Tianjin has sentenced prominent human rights lawyer Wang Quanzhang to 4 1/2 years in prison for subversion of state power. The 42-year-old went missing in 2015 amid a crackdown on activists and lawyers. (28.01.2019)

Don't "sleepwalk" into permanent surveillance in the coronavirus pandemic's aftermath, warn 100 civil society groups. Digital surveillance rolled out to curb the virus should be limited in time and scope, they say. (03.04.2020)