China launches car offensive in Bulgaria | Europe | News and current affairs from around the continent | DW | 27.02.2012

A Bulgarian company is looking to use Chinese cars to establish itself on European markets. Three models belonging to China's most successful SUV producer, Great Wall, are to be assembled at the brand-new Lovech plant. 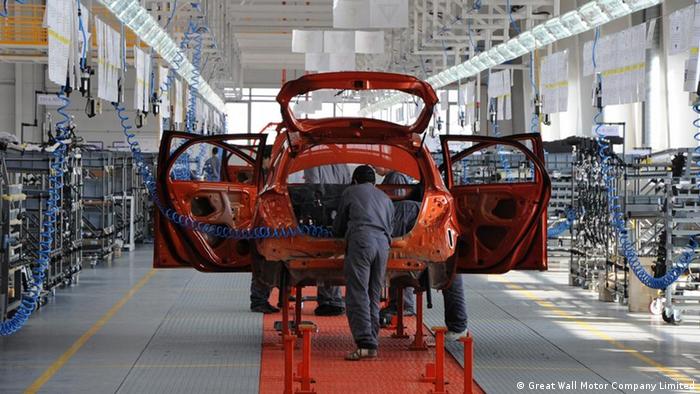 "Bulgaria's dream of producing its own cars has finally come true," reads the slogan being used by the Bulgarian company, Litex Motors, to promote the cars that have been rolling out of a brand-new factory in the small town of Lovech for the past week.

This slogan couldn't be farther from the truth, however. All the parts being assembled here are imported from China; the 120 workers at Lovech do nothing more than screw the parts together to put together three models of China's largest SUV producer, Great Wall. Around 2,000 cars are to be produced by the end of the year in Lovech. 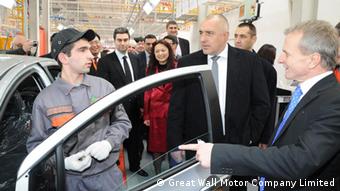 Bulgarian PM Borisov, right, is proud of the Lovech site

And the plant's ambitions don't stop there. "Depending on demand levels, we are looking to produce between 50,000 and 70,000 cars per year," marketing director Ivo Dekov said, adding that plans were already in the making to create an industrial zone in Lovech where Great Wall parts would be produced as well.

Ambitious, yet not unrealistic

Around 30 million euros have so far been invested in the production zone in Lovech. Chinese participation, however, has been low, according to Dessislava Nikolova, of Bulgaria's independent institute for market research.

A large majority of the capital was provided by Litex Motors, an arm of one of Bulgaria's largest groups, Litex Commerce, which deals principally with oil but also with energy, food stuffs, transport, tourism and real estate. By 2017, the company wants to increase its investments threefold.

Low wages and taxes were most likely an influence in the choice to produce in Bulgaria. The most important factor, however, was the access it gives China to EU markets, said Nikolova. Seeing as though Bulgaria is an EU member state, this does away with customs and other limitations that China would normally have to deal with, she added. 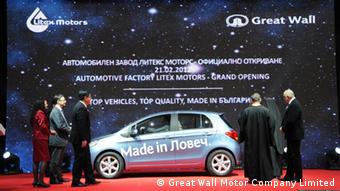 Litex and Great Wall look to produce up to 70,000 cars a year

The market expert added that the Litex/Great Wall enterprise was ambitious, yet not unrealistic. These cars, which are to cost between 8,000 and 12,800 euros, would be the cheapest in their class. "And we all know that people turn to the cheapest products, especially in times of economic downturn."

Car production is not completely new for Bulgaria. The British carmaker Rover set up production in Bulgaria 17 years ago to build its "Maestro" model, an undertaking that folded within its first year.

The beginnings stretch back to the Communist era, in the late 1960s, when Renault attempted to build its "Bulgar-Renault" and Fiat tried its luck with the "Pirin." The first Soviet carmaker to produce cars in Bulgaria was Moscovich, which, as Georgi Schivarov, chair of Bulgaria's industrial alliance, remembers, discontinued production after just a few years. The Moscovich factory was also in Lovech, which "makes it no surprise that [Litex] is building here too," Schivarov said in an interview with DW.

Though controversy already surrounds the Lovech site, which includes allegations that Litex CEO Grischa Gantschev is involved in money laundering and harbors connections to the mafia, the mayor of Lovech has welcomed the jobs it creates and the chances offered to young people in the area.

And Schivarov, of Bulgaria's industrial alliance, sees the Lovech site as the entire country's chance to make much needed improvements. Even if the parts aren't made in Lovech, "the fact alone that the car industry is now present here could give life to other industry branches in future, like textiles, chemicals or metals." 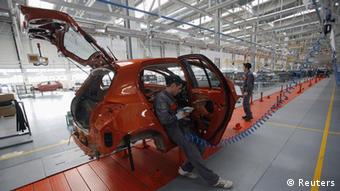 Dessislava Nikolova, as well, stressed the positive aspects of the Litex investment. "Following the construction boom of the past decade this branch is still in crisis. The Bulgarian economy needs a motor of growth and investments in other areas." For this reason, Nikolova is not bothered by Great Wall's attempt to use Bulgaria as a springboard to European markets.

Bulgaria itself is still reeling from its failed attempts to create an automobile industry, which isn't helped by China's record in Europe. All attempts thus far at production of Chinese cars have ended in breakdown.

But, one must also note the success Great Wall has enjoyed with similar operations in other parts of the world, for instance Russia, Indonesia, Egypt, and Ukraine. In Bulgaria, the company is even offering on top of the dazzlingly low prices a five-year warranty on all models.

Chinese carmaker Great Wall has completed a test run in its first production facility in the European Union. The plant at Lovech in Bulgaria will now start production and sales for the European market. (21.02.2012)

Nokia factory closure spells lights out for workers in Cluj

Three years ago, Nokia announced it would close a factory in the German city of Bochum to move to a cheaper facility outside Cluj, Romania. Now, the factory in Cluj is set to be closed at the end of the year. (30.10.2011)

Some enterprising Bulgarian dentists are offering special packages to foreign patients, who travel to the country from western Europe in search of quality treatment at low cost. The industry is set to grow. (19.11.2011)

The German auto industry is under pressure from the burgeoning Chinese competition. Great Wall Motors, one of China's largest carmaker, has announced the large-scale entry of its electric brands into the European market.

The General German Automobile Club (ADAC) is also urging citizens to drive more slowly to save on fuel consumption. The association wants to reduce Germany's reliance on Russian oil.