′Dental tourists′ search for treatment in Bulgaria | Europe | News and current affairs from around the continent | DW | 19.11.2011

Some enterprising Bulgarian dentists are offering special packages to foreign patients, who travel to the country from western Europe in search of quality treatment at low cost. The industry is set to grow. 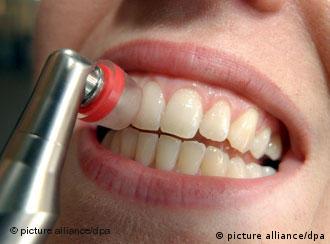 As cost pressures in the health care systems of rich countries start to bite, an increasing number of western Europeans are traveling east to seek cheaper medical treatment. They are being welcomed by Bulgaria and other countries where low labor costs mean health care providers can offer a combination of medical expertise and low costs.

A recent report by the Economist Intelligence Unit found that Bulgaria was "well-placed" to develop its medical tourism industry.

A number of enterprising Bulgarian dentists are cashing in on this idea, by offering special deals to their foreign patients. 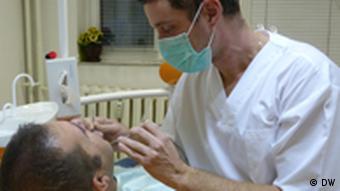 Alexander Klochkov treats many foreign patients in his Sofia practice

The company he works for, BG Denta, is among those offering patients much more than only dental care. It arranges flights, books hotels, sets up airport transfers and even organizes sightseeing tours and day trips.

Several low-cost airlines in Europe already offer cheap flights to Sofia as well as Varna, a popular resort on the Black Sea coast, where there are a number of clinics catering to health tourists. Cross-border travel for fertility treatment and plastic surgery is also on the rise.

Across the European Union

Martin from Dublin was among those who decided to travel to Bulgaria to seek dental treatment with Klochkov and his team. After researching prices and reading reviews on the Internet, he discovered that it would cost far less than in his native Ireland.

"I had a very extensive amount of work to be done, and I also had a limited amount of time," explained Martin, who said he would not use his full name. "One of the selling points was that the dentists there were able to say, 'look we'll take out all the stops' to achieve what they set out to achieve. They put a program in place which they proposed to do in six days, and succeeded in doing in six days." 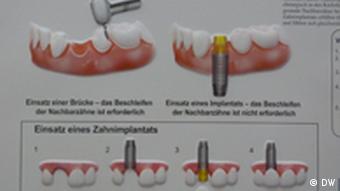 In Klochkov's clinic, material is available in German and English

The language barrier was no problem either. Most of the dentists speak English or German, and they employ a translator in the dental surgery. Martin has already recommended the idea to others back home in Dublin.

"Particularly for somebody traveling over there into the unknown: I was met at the airport, taken to the hotel, everything was like clockwork," he said.

Martin was lucky: since returning to Ireland he hasn't needed any adjustments or follow-up treatment.

But Nikolai Sharkov, vice-president of the Bulgarian Dental Association, warned that dental tourism has its risks. He explained that most people are put off by the fear of something going wrong, and the difficulty of making follow-up appointments. However, Sharkov offered his assurance that Bulgarian dentists are as well-trained and well-qualified as their western European counterparts.

"If you go to a Bulgarian dental clinic you'll see the same equipment, the same units, the same materials which are used in all the European countries, and around the world," Sharkov said.

As a member of the European Union, Bulgaria has to conform to a common set of standards.

And, as one of the poorest countries in the EU, Bulgaria can capitalize on this tourism trend to create much needed healthcare jobs, and generate revenues.

A high school in Bulgaria has become the first in Europe to introduce chess as a compulsory subject for all its students. Those behind the project want the idea to be extended across the continent. (29.10.2011)

The illegal cultivation of marijuana is booming in southern Bulgaria - cannabis is said to thrive in the temperate climate. Even pensioners are cashing in to boost their pensions. (04.09.2011)