Bulgarian school puts chess on the curriculum | Europe | News and current affairs from around the continent | DW | 29.10.2011

A high school in Bulgaria has become the first in Europe to introduce chess as a compulsory subject for all its students. Those behind the project want the idea to be extended across the continent. 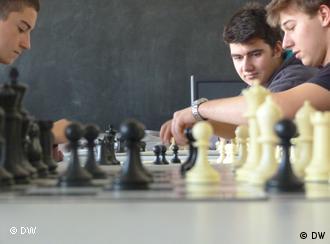 In a classroom on the top floor of the Eurostandard High School in central Sofia, a group of pupils are laying out chess sets ready for their next lesson.

At the beginning of the school year, these pupils became the first in Europe to take chess classes as an obligatory subject. It's a pilot project initiated in partnership with the European Chess Union. The program is designed to promote chess among young people throughout Europe.

"We care about our children of the new generation in Europe, so of course we want to give them the best, that's why we need to promote chess," Boyko Hristov from the European Chess Union told Deutsche Welle. "That's why our partnership became a reality." 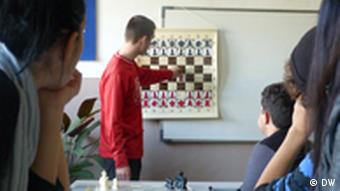 The children at Eurostandard are the lucky ones. It's a private high school, which specializes in preparing elite students for careers in banking, finance and insurance. There are just 50 pupils, aged 14 to 18.

Hristov hopes this school will be the first of many. He said the Bulgarian Ministry of Education has expressed an interest in introducing chess classes in the public school system, but there's one major stumbling block.

"Of course, the Bulgarian state has to find the money to promote chess in our schools," Hristov acknowledged.

The state would also have to find space for chess in the national curriculum. Currently, Bulgarian children have three hours of physical education a week. Hristov has suggested that the third hour could be lent to chess lessons. He sees chess as a kind of exercise for the brain.

"We treat chess like a sport, not just like a game. It really is a sport, because we train our muscles, but our brain is part of our body, the same as our muscles. It just has a different function," said Hristov. "There's a lot of research which shows if you train your brain, it will be in good condition for longer."

In Bulgaria, the National Olympic Committee has even been fighting for chess to be recognized as an Olympic sport. 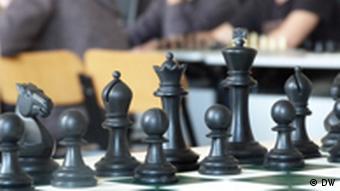 There are hopes that the program will be expanded

In September, the European Chess Union presented their program for "chess in schools" to the European Parliament. Apparently it was received with "great interest."

However, chess is already a popular pastime in eastern Europe. In the Balkans, children are taught to play at a young age. In Bulgaria, great chess players like Veselin Topalov have become national heroes.

By contrast, in western Europe, there is less of a tradition of chess playing. It may be harder to convince schools in countries like France and Germany of the need to treat chess as anything more than a hobby.

The European Chess Union would argue that chess is an important tool for developing strategic thinking, logic and concentration skills among all youngsters. At the Eurostandard High School, two 17-year-olds give their thoughts on the subject.

"I like it as an idea in school because chess is developing your thinking skills and your mental condition," explained Stefan. "It's great to play in school."

"It's a great idea because it exercises your brain," said Christian. "But I don't like it personally. It's OK for entertainment."

It started with a cartoon but has become a sport taken seriously around the world. Chess boxing recently returned to Berlin after a world tour as its founder prepares to pass the baton to the next generation. (08.11.2010)

Top doctoral students from around the world are finding Germany's new graduate schools an increasingly attractive option, compared with top US institutions. (15.10.2011)

People on the autism spectrum often face discrimination and other challenges in everyday life. In Bulgaria, activists are working to raise awareness and reduce stigma.