Firefighters worked for 10 days to extinguish fires that broke out in the forest around the Chernobyl nuclear plant. Ukrainian officials say they've tracked down two men who are believed to be behind the blazes. 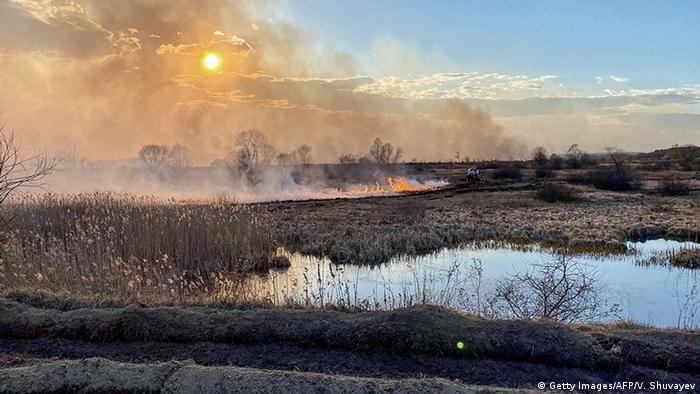 Hundreds of firefighters battled the blazes over the past 10 days, using planes and helicopters to put out the flames.

Recent rain helped emergency crews put out the larger blazes, preventing the fire from spreading to either the defunct nuclear plant or other facilities in the area, Ukrainian President Volodymyr Zelenskiy's office said in a statement.

Officials acknowledged that some grassy areas were still smoldering, but said no large open fires remained.

On Monday, environmental activists warned that the fires in the forest posed a radiation risk to surrounding areas and that they were getting dangerously close to radioactive waste storage facilities.

Mykola Chechetkin, the head of the Emergencies Service, said the fires were put out before they reached radioactive waste storage facilities.

"Background radiation in the exclusion zone remains within normal limits and is not increasing," Chechetkin told the president during a conference call.

He added that radiation levels were normal in the capital Kyiv — located around 100 kilometers (60 miles) south of Chernobyl — and that no additional protective measures were necessary.

Ukrainian authorities say at least one person is believed to have deliberately started the fires.

Last week, police tracked down a 27-year-old man who told authorities he set fire to dry grass near the forest "for fun" and then did not put out the blaze when it began to spread.

On Monday, police said they spoke with another local resident who accidentally set the dry grass on fire. Unusually dry conditions caused the fires to spread rapidly.

Chernobyl was the site of the world's worst nuclear disaster when the No. 4 reactor exploded in April 1986, causing large quantities of radioactive material to disperse in the atmosphere. The cloud of radioactive dust was sent over much of Europe.

A 2,600-square-kilometer (1,000-square-mile) exclusion zone was established following the disaster, and continues to log dangerous levels of radiation from the accident.

Emergency units are trying to contain fires in radiation-contaminated forest near the abandoned Chernobyl nuclear plant. The fires have caused a spike in radioactivity in the area. (06.04.2020)

A fire has broken out in a Ukrainian forest within the thousand-square-mile exclusion zone of the abandoned nuclear power plant at Chernobyl. Two firefighting planes and a helicopter were deployed to the scene. (04.04.2020)