Emergency units are trying to contain fires in radiation-contaminated forest near the abandoned Chernobyl nuclear plant. The fires have caused a spike in radioactivity in the area. 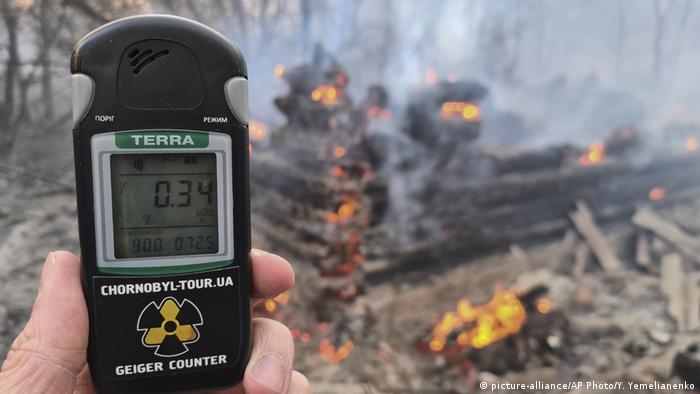 Firefighters in Ukraine said Monday they were using aircraft to extinguish one of two blazes that broke out on Saturday in a sealed-off zone around the Chernobyl nuclear plant, the site of a major nuclear incident in 1986.

They said the fire in Kotovsky Forest near the village of Volodymyrivka covered about 20 hectares (50 acres). Another fire over 5 hectares (12 acres) has been contained, they said.

The fires have raised fears that radiation from the area could be dispersed farther afield, but authorities said while radiation in the fire zone was far above normal levels, levels in the capital, Kyiv, some 100 kilometers (60 miles) south, were within norms.

On Sunday, emergency services spoke of difficulties getting to some burning areas because of detected high radiation.

Chernobyl was the site of the world's worst nuclear disaster when the No. 4 reactor exploded in April 1986, causing large quantities of radioactive material to disperse in the atmosphere. The cloud of radioactive dust was sent over much of Europe.

Tens of thousands of people were forced to relocate in the wake of the disaster, but some 200 people have remained in the area despite orders to leave. Fires in the zone are a regular occurrence.

Television show maker Craig Mazin reminded visitors to the exclusion zone in Ukraine that "a terrible tragedy occured there." Tour operators have reported a huge spike in interest after the release of the miniseries. (12.06.2019)

Oksana Masters, who was born with radiation-induced birth defects caused by the Chernobyl nuclear disaster, has won Paralympic gold in cross country skiing. She had won two previous medals at the 2014 Sochi games. (14.03.2018)