Fires are still blazing near the site of the world's worst nuclear disaster. Ukraine's President Volodymyr Zelenskiy has visited firefighters trying to extinguish the flames, marking the 34th anniversary of the accident. 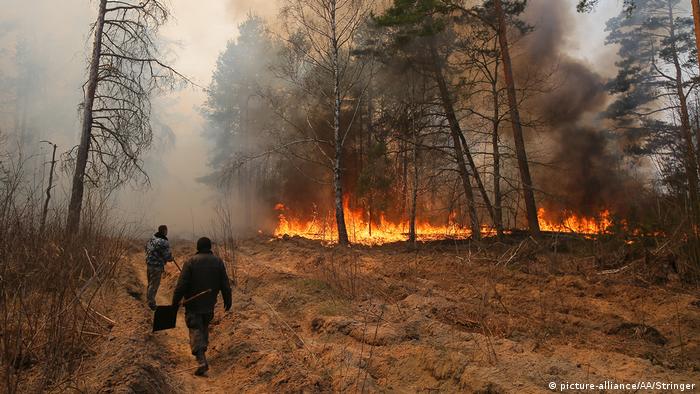 More than 1,000 firefighters were working on Sunday to contain wildfires in the radiation-contaminated Chernobyl exclusion zone in Ukraine. Sunday marks the 34-year anniversary of Chernobyl nuclear disaster.

"On this day we bow our heads to the blessed memory of those heroes who saved the future from the danger of radiation," President Volodymyr Zelenskiy, who visited the firefighters on Sunday, said in a statement to mark the anniversary.

He also expressed "deep respect" for the firefighters and others currently working in the zone to protect the lands from new disasters.

Firefighters have been fighting the forest fires since they broke out at the start of April. They have been raging largely around the sealed-off zone near the Chernobyl plant.

Environmental experts feared the fires could stir up radioactive ash and potentially blow contaminated smoke to the capital, Kyiv — about 100 kilometers (62 miles) away from the power plant. But authorities have assured that radiation levels in the city are within an acceptable range.

On Sunday, firefighters were focusing on the "containment of two cells" of smoldering trees and brush, the State Emergency Service said in a statement.

Around 11.5 thousand hectares have been destroyed by the fires, said Zelenskiy in a tweet on Sunday. The damage was "terrible" he added.

The tweet was accompanied by a photograph of the president meeting a firefighter at the site while observing coronavirus hygiene protocol — they were pictured wearing masks and bumping fists rather than shaking hands.

Anniversary of a disaster

Chernobyl was the site of the world's worst nuclear disaster when the No. 4 reactor exploded on April 26, 1986. The explosion caused large quantities of radioactive material to disperse in the atmosphere. The cloud of radioactive dust was sent over much of Europe.

Radiation from the accident is still present in the 2,600-square-kilometer (1,000-square-mile) exclusion zone that was set up around the site.

Tens of thousands of people were forced to relocate in the wake of the disaster, and several people died. Fires in the zone are a regular occurrence.

Ukrainian authorities believe the current fires may have been deliberately lit.

Firefighters worked for 10 days to extinguish fires that broke out in the forest around the Chernobyl nuclear plant. Ukrainian officials say they've tracked down two men who are believed to be behind the blazes. (14.04.2020)

A fire has broken out in a Ukrainian forest within the thousand-square-mile exclusion zone of the abandoned nuclear power plant at Chernobyl. Two firefighting planes and a helicopter were deployed to the scene. (04.04.2020)