Chemical Weapon Time Bomb Ticks in the Baltic Sea | Germany | News and in-depth reporting from Berlin and beyond | DW | 01.02.2008

For almost 50 years chemical weapons from two World Wars have been lying at the bottom of the Baltic Sea. Authorities deny they are a danger, but environmentalists are calling for their removal and proper disposal. 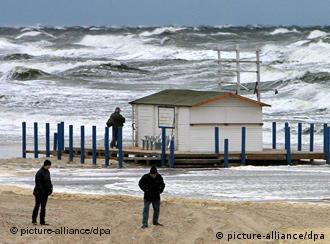 In 1961, life-threatening chemical weapons left over from World War I and World War II, were dumped in the Baltic Sea just eight kilometers (five miles) from the shoreline of the German town of Lübeck.

Over the past 47 years bottles containing 20,000 liters (5,283 gallons) of chloric gas, laughing gas and other poisonous chemicals have been pushed around by underwater currents at the bottom of the sea, making the exact current location of the bottles anyone's guess.

Oceanographer and ammunitions expert Stefan Nehring, called this week, for authorities to recover the bottles from the seabed, before a chemical disaster happens. 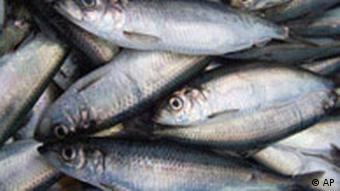 Effects for sea life would be catastrophic if the containers leak

"If one of these bottles breaks, thousands of liters of chloric gas will be released into the ocean, which could kill anyone in the immediate surroundings," he said. "Even from a distance of 300 meters, these chemicals pose serious health risks to humans."

If the bottles break, the toxic gasses released could potentially poison the sea's wildlife, ecosystem and fishermen at sea, as well as their catch. Experts say the bottles could also pose a threat to beach-goers, if they wash up on the coast.

Environmental protectionists have called on officials to remove the toxic chemicals and dispose of them properly, but the Lübeck authorities claim they have no official record of "chemical agent ammunition" being dumped in the area.

The Süddeutsche Zeitung paper announced Friday, Feb. 1, that it is in possession of official papers that document the dumping. The paper also revealed that the authorities responsible have attempted to cover up the dumping. 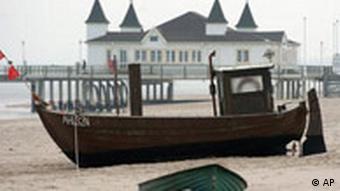 The Department of Transport has said that there is no proof or documentation of any dumping of chemical ammunition in the Lübeck Bay. By classifying the gasses in question as "chemicals" instead of "chemical ammunition," the department has legally avoided having to document or declare the dumping.

However in July of 2007, after being prodded by citizens' groups and environmental activists, Lübeck's Environmental Minister Thorsten Geissler gave a statement to the press that implied the dumping had indeed occurred.

"The chemical agents disposed of do not pose a threat to Germany's coastal waters or to the environment," he said. "To salvage them in a recovery effort would be more of a contamination risk then simply leaving them on the sea bed."

As the story made a return to the limelight this week with a public symposium on the matter, the Department of Transport refused to comment on the issue until they have re-examined their records.

At the symposium, oceanographer Nehring said the Lübeck chemical weapons dumping is not a singular case. He claims there is evidence that more containers of chemical weapons out there, drifting dangerously in the coastal waters off the German coast.

"The poison gas has to be located and disposed of," Michaela Blunk, a member of the local free-market FDP party, told the Süddeutsche Zeitung.

Global warming is causing the air and water temperatures in the Baltic Sea region to heat up more intensely than other parts of the world, according to a recent study. (23.01.2008)

Poland's incoming prime minister, Donald Tusk, has said that worries about natural gas supplies and the environment might mean an end to the planned pipeline that would ship Russian supplies directly to Germany. (07.11.2007)

Do you think environmentalists are overreacting? Send us your comments and please include your full name and country in your reply.