The construction of the Berlin Wall began on August 13, 1961. One of eight inner-city border crossings was created on Friedrichstrasse. Today, Checkpoint Charlie is a special place of remembrance. 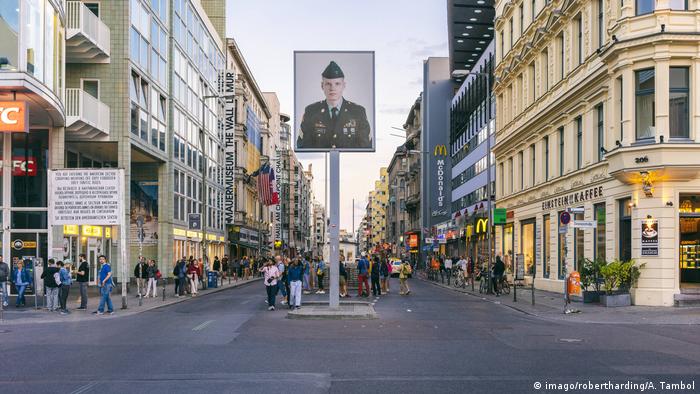 A boy, who comes from India, stands to the right of the reddish-brown band of cobblestones, his father to the left. They shake hands, smile at the camera, and the boy's mother takes a picture. A souvenir photo of a Berlin visit and of a crossroads at which German post-war history is condensed in a remarkable way: Because here, where Friedrichstrasse and Zimmerstrasse meet, is where the most famous border crossing within the divided city, the so-called Checkpoint Charlie, was located until 1990.

Much of what once stood here has disappeared. So has the Wall, which from August 13, 1961, to November 9, 1989, sealed former East Germany and East Berlin hermetically from the western part of the city. Only the band of reddish-brown cobblestones, over which the Indian boy and his father so naturally shook hands, marks its course today. The guard house of the Western Allies which was in the middle of Friedrichstrasse was also removed shortly after the fall of the Wall. Today it can be found in the Allied Museum in Berlin-Dahlem. 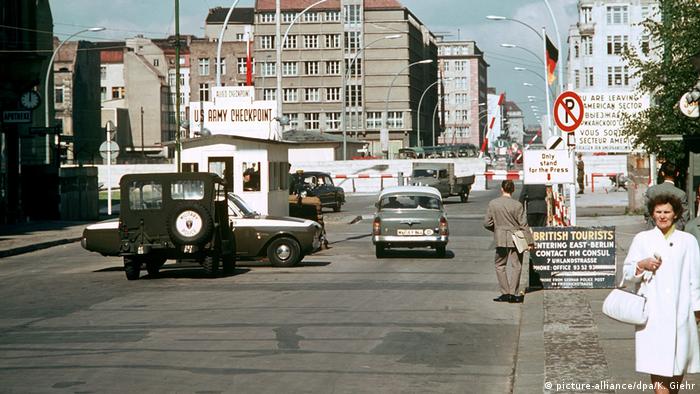 Checkpoint Charlie — the border crossing point for foreigners and diplomats, photographed at the beginning of the 1960s

The original site has to make do with a copy, officially inaugurated on August 13, 2000 — a white shed with loudspeakers, searchlights and a sign reading "US Army Checkpoint" on the roof and a sandbag barricade in front of the door. For reasons of durability and stability, the bags are these days filled with concrete, because almost every tourist to the area will position themselves behind them for a photo.

History to take away

Berliners rarely come here, but for tourists from all over the world Checkpoint Charlie is one of the city's most important sights. They come by subway, electric scooter and sightseeing buses and spend the whole day in this curious mixture of history and fairground. 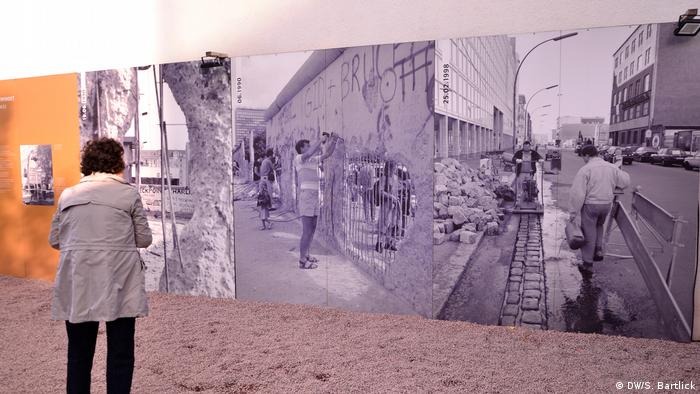 Tourist in front of the open-air gallery at Checkpoint Charlie

A warped construction fence serves as a partition wall for an open-air gallery. In a few words and with some faded pictures, it tells how the Allied victorious powers divided Germany into occupation zones in 1945, how tensions arose between on the one hand the French, British and Americans and on the other the Russians, and how West Germany and East Germany were founded, and how the East German leadership sealed off the border to West Berlin on August 13, 1961.

And so, it continues until the opening of the border on November 9, 1989 and ends with the so-called wall woodpeckers, who boldly knocked pieces out of the Berlin Wall that had become useless. You can buy such pieces, provided with a supposed certificate of authenticity, right next door at the kiosk, starting at 6.99 euro (7.80 US $) a piece. Also, on offer: Wall postcards, Berlin magnets and reprints of newspapers from the fateful years 1961 and 1989.

Souvenirs: So long as it has something to do with the Berlin Wall

In the nearby Blackbox Cafe, you will find sandwiches on the menu called American Mousetrap or 4 Sectors. And right across the street there's another good selfie motif: an original segment of a wall, broken open by wall woodpeckers. You just place yourself in the gap, smile and somebody takes a picture. A Chinese tourist group finds this very amusing. But suddenly everyone sniffs. What is that strange smell? It is an approaching column of original Trabant cars, with tourists at the wheel, and it is they that are spreading the distinctive stench of the East German two-stroke. 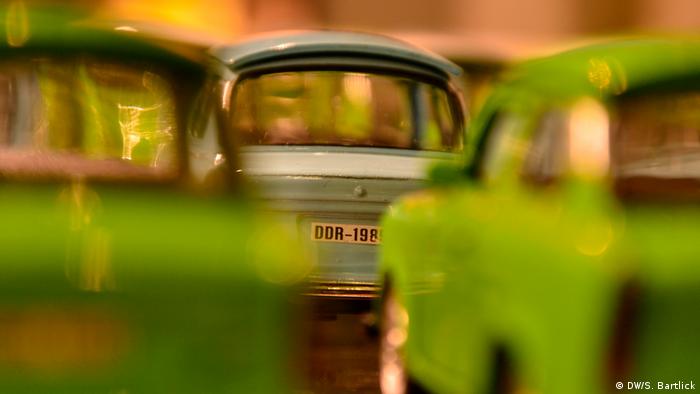 Model toy "Trabi" cars, as the Trabant car was affectionately known, can now be bought as a souvenir

Passing other souvenir shops, the route leads to the Wall Museum, which tells "the whole story" in small, crowded rooms with text boards, pictures, videos and original exhibits — in which the escape from the former East Germany in suitcases, converted cars, through tunnels and across the Baltic Sea takes up a great deal of space. This museum, which is said to be one of the most visited in the city, costs 14.50 euro and of course has a huge museum shop where you can buy everything from caps to T-shirts, mugs, bags and umbrellas, on which you can print anything with reference to the Berlin Wall.

A look over the wall

The street in front of the exit is named after Rudi-Dutschke, the legendary leader of the West Berlin student movement, who suffered severe brain injuries in an assassination attempt in April 1968. His Berlin was walled in. Particularly affected: a part of Kreuzberg where the Wall was on three sides. Punks, musicians, artists and students lived in the shadow of the Wall in carriage strongholds and squats. The division had become normal, people had come to terms with the situation.

What this looked like can be marveled at diagonally opposite the Wall Museum. Here, artist Yadegar Asisi has created one of his famous panoramas: In the foreground, the deserted streets of Kreuzberg, a stone's throw away, the death strip several meters wide with the border fortifications. A condensed image of normality in the divided city.

Michael Hartmann, ex-punk and photographer, is someone who can talk a lot about this, and one of three people from East and West Berlin with whom you can now go back in time. This new attraction, launched in August, enables an unusual journey into the past.

A bus tour to East Berlin

Under virtual reality (VR) glasses, guests of the TimeRide show in Zimmerstraße can immerse themselves in East Berlin of the 80s. First they are given an impression of life in the divided city with the help of short videos and the memories of eyewitnesses. Then they have to decide: Who will commentate on the concluding virtual journey through time? Harry Liedeke, the tiler from Pankow, Elke Makowski, the architect from East Berlin or Michael Hartmann from Kreuzberg? The replica 80s bus, in which you take a seat, equipped with VR glasses and headphones, of course doesn't really drive anywhere. But the sensory illusion is almost perfect: The engine starts, the vehicle begins to rumble and you listen for Harrys, Elkes or Michael's observations. 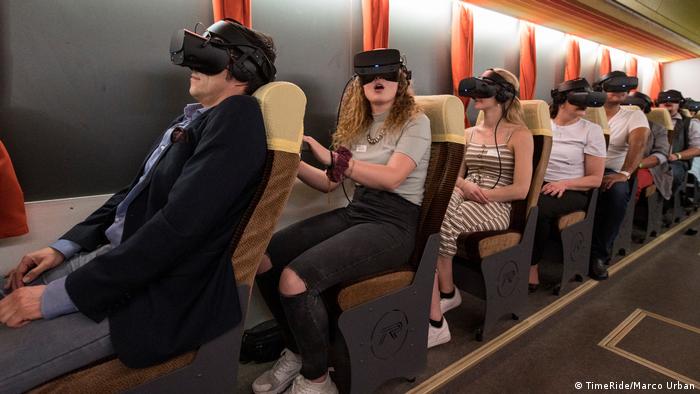 The route leads past the border crossing Checkpoint Charlie to East Berlin, past Saxon border guards and young pioneers via the Gendarmenmarkt to the car park next to the Palast der Republik (Palace of the Republic). And here they appear again, the Trabi cars, in which today tourists go on safari through Berlin. Take off your glasses and you' re right back in the present. Now might be a good time for a drink. On the former death strip, in the no man's land of the Cold War, Charlie's Beach Bar is a place to eat, drink and chill out. Under palm trees, with deckchairs and a sandy beach.

Local authorities have revoked permission for actors to dress like US soldiers and take pictures with tourists. Police had reportedly requested the ban, saying some actors pressured tourists into paying for the photos. (04.11.2019)

A new app sends history fans on a special journey back in time through Berlin, to 200 places associated with historical moments of freedom. We tested the "Path of Freedom" tour. (04.03.2019)

The Berlin Wall fell in 1989 and after years of division, the people of East and West Germany were reunited. Thirty years later, many of their stories have faded. The memorial on Bernauer Strasse recounts their fates. (31.10.2019)

The Wall Panorama in Berlin