James Fields Jr. was convicted on state charges over the death of Heather Heyer and causing dozens of injuries. He had avoided the death penalty by pleading guilty to hate crime charges. 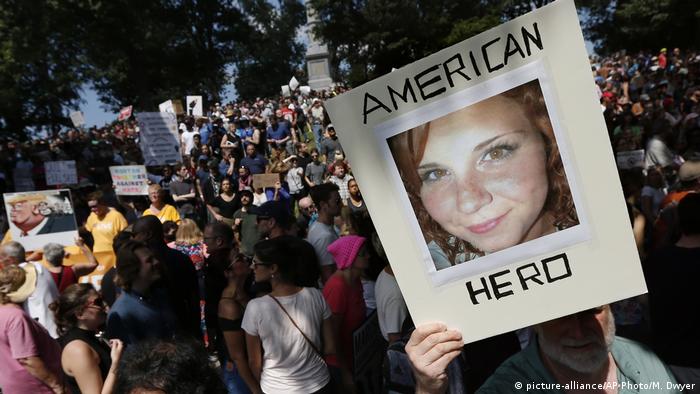 James Alex Fields Jr., an American neo-Nazi and white supremacist, was given a second life sentence on Monday in connection with his 2017 attack against a group of activists in Charlottesville, Virginia. Fields killed 32-year-old Heather Heyer (pictured above) and injured 29 more when he rammed his vehicle into a crowd.

Fields, 22, had already been condemned to life in a federal case after a jury found him guilty on ten counts, including first-degree murder, in December.

He avoided the death penalty in June when he agreed to plead guilty to 29 hate crime charges. His second life sentence was handed down separately by a Virginia court.

At the "Unite the Right" rally on August 12, 2017, Fields took part in racist, anti-Semitic and homophobic chants at a march protesting the removal of a statue of Robert E. Lee, the general who led the pro-slavery Confederate Army during the US Civil War.

He then drove his car through the crowd of counterprotesters who had gathered in opposition to the neo-Nazis.

Prosecutors argued that the attack was premeditated, using as evidence Instagram posts made by Fields months before the rally that depicted a car crashing into protesters.

After the violent attack, US President Donald Trump drew immense criticism for referring to "very fine people on both sides" of the rally.

The jury recommended James Alex Fields Jr. spend life behind bars for driving his car into counterprotesters at a white nationalist rally. One woman was killed and 19 others were injured in the attack last year. (11.12.2018)

James Alex Fields Jr. rammed his car into a crowd of people protesting against a white nationalist rally in August 2017. Heather Heyer was killed and dozens were injured. (08.12.2018)