Chanel pays tribute to Lagerfeld with his final collection

With Fashion Week in Paris, the German designer's iconic white ponytail and dark shades were missed. Karl Lagerfeld was nevertheless present at the show with his final collection for Chanel. 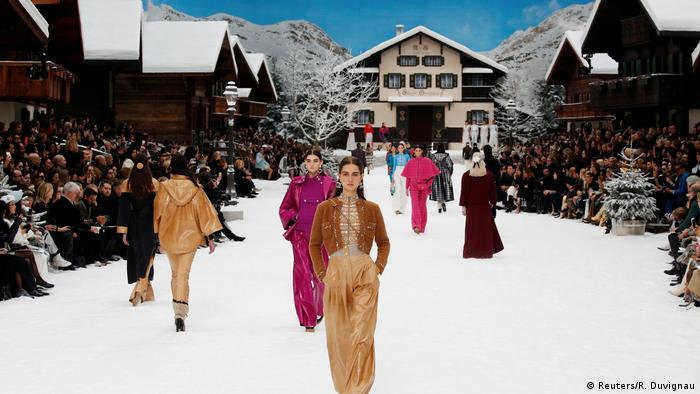 The presentation of Karl Lagerfeld's final collection for Chanel, shown at Paris women's fashion week on Tuesday, opened with a minute of silence in tribute to the fashion giant. The label's iconic creative director passed away on  February 19 at the age of 85.

After models stood silent on the catwalk at the Grand Palais in Paris, a recording of Lagerfeld's voice talking about his presentations was played. He could be heard, with his distinctive German accent, describing how Queen Elizabeth II once came to one of his shows and said it was "like walking into a painting."

For the show dedicated to the most prolific designer of the past century, the Grand Palais was turned into an Alpine winter wonderland, with a dozen chalets and drifts of artificial snow — a set worthy of Lagerfeld's legendary showmanship.

On the catwalk, different Chanel muses were part of the line-up, including Cara Delevingne who opened the presentation, as well as actress Penelope Cruz and the young Kaia Gerber, Cindy Crawford's daughter. The show concluded with a David Bowie song, "Heroes."

Vogue's editor-in-chief Anna Wintour, top model Claudia Schiffer, who was Lagerfeld's muse in the 1990s, as well as Monica Belluci and Korean K-pop singer Jennie were among the stars attending the event in the first row.

Setting an upbeat tone before the begin of the presentation, every guest was given a drawing of the designer alongside the brand's founder, Coco Chanel, accompanied by the caption, "The beat goes on." The tribute to the German-born creator reflected the "Kaiser's" dry wit by avoiding teary displays of mourning.

While his punchy statements grabbed headlines, Lagerfeld's leadership of famous haute couture fashion house Chanel is what truly made him a star. The prolific designer oversaw the brand for the last 37 years, leading it through a variety of changes, which included, ironically, incorporating sweatpants into the fashion lineup — even though he had also famously declared that sweatpants were "a sign of defeat."

Overseeing the collection this time around is Lagerfeld's closest collaborator, Virginie Viard, who has worked with him for over three decades; Lagerfeld had described her as his "right and left hand."

Viard started at Chanel as an intern and only left to work with Lagerfeld for five years at Chloe — another French brand for which he worked for 25 years — before she returned to Chanel as haute couture coordinator.

It remains unclear how many of the pieces appearing on the catwalk today were designed by Lagerfeld himself, but given his close partnership with Viard, perhaps it doesn't really matter.

The designer, a self-proclaimed workaholic, was known for hand-drawing ideas he would give to her to realize."I understand him and I can sublimate what he wants to do and bring to Chanel," Viard told French press agency AFP in a 2015 interview. 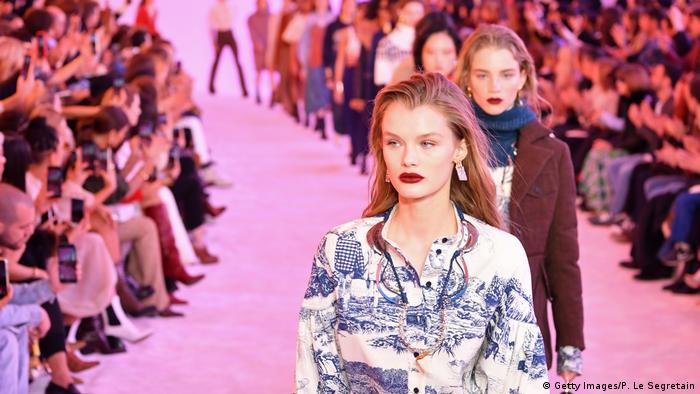 Last week, Chanel's owners dispelled rumors that Viard would only temporarily take over as the creative head of the house until they'd line up another big name, stating that they had absolute "confidence in the team that worked with Karl Lagerfeld for over 30 years."

Chanel has announced that a actual farewell event for Lagerfeld will take place at a later date and not as part of Tuesday's show. The designer was cremated at a simple ceremony attended by only his closest friends and colleagues.

Lagerfeld was known to attend every show put on by the fashion house. However, in January, illness kept him from attending Chanel's haute couture presentation for the first time.

Whether it's about models, cats or sweatpants — no one knew just what outrageous comment fashion designer Karl Lagerfeld would utter next. Here is a roundup of our favorites. (19.02.2019)